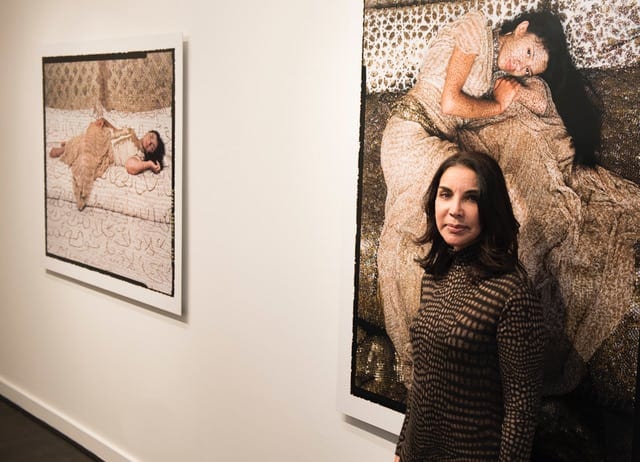 Artist Lalla Essaydi with her exhibition Bullets currently at Jackson Fine Art. (Photo by and courtesy of Virginie Kippelen.)

A conversation with Lalla Essaydi about “Bullets,” the Arab Spring and violence against women

Bullets, Lalla Essaydi’s exhibition at Jackson Fine Art through April 15 is a provocative and metaphorically loaded take on the condition of women in today’s Arab world.

In this new series, the Moroccan-born New York-based artist denounces the violence women were subjected to following the repression of the Arab Spring. A departure from the pleasing aesthetics of the ancient Moroccan palaces of her previous work, Essaydi instead positions her subjects in front of monochromatic tapestries composed of thousands of bullet casings sewn together. Her models almost disappear into their grounds, wearing metallic dresses made of bullet shells that required months of preparation.

Like in Femmes du Maroc, her previous work, Essaydi places her feminine models in poses and compositions that conjure up the odalisques of the 19th century Orientalist painting. She inscribed the surface of their bodies with henna calligraphy, a traditional male practice. Her subjects are locked in a defiant gaze.

Essaydi’s art is as much photography-based as it is a documentation of her meticulously executed installations. We sat down with Lalla Essaydi to talk about her work and exhibit, her fourth at Jackson Fine Art.

ArtsATL: There is an obvious continuity with this new work, Bullets, from your earlier series, Femmes du Maroc. What was your inspiration?

Lalla Essaydi: This work started during the Arab Spring. We were all very excited to see the women at the forefront of the protests and we were hopeful that, finally, women would not be treated as second-class citizens in the Arab world anymore. When the conservative government took hold, the first thing they did was to put women back to where they thought they belonged.

On the squares, there were a lot of rapes and beatings. It was really horrible to watch and to not be able to do anything about it. Bullets is about that violence projected on women, specifically physical violence during gatherings in the squares in Egypt and other places — women being violated. I was not there at that time, unfortunately, but I was living it step-by-step. The only thing I could do is to put it in my work and show the world what women were subjected to.

ArtsATL: How did you come to think about using bullets to express this violence?

Essaydi: This series is a much more aggressive work than previous ones. This is the very first time I am using a visual language that expresses violence directly, and violence projected on women. Before, the dresses [the models were wearing] were very fluid — everybody used to think it was very feminine. [In this work] the dresses are completely covered with bullets. The women themselves become bullets.

I was going to call this series Reload instead of just Bullets. Bullet shells, especially the .22-caliber ones that I work with for the dresses, usually can be reloaded. There is this part. But it is also like reloading the history. I gather all the information, put it in my head, live with it and then upload it again but in a different context. The way I work is that I find a title first, and then this title drives the whole work.

ArtsATL: Practically, how and where did you find all these bullets?

Essaydi: They were very hard to find. I used to send my assistants to go to training sites where people go shoot, in Chicago, in Atlanta, in any place we would gather them by the buckets. We sorted them out and created a machine to cut them, and another machine to make a hole in them, so we could weave them into the fabric. The dresses become very heavy to wear, like armor.

ArtsATL: Throughout your series of portraits, you use calligraphy in a metaphoric way. You call it “deliberately indecipherable,” words loosely inspired by conversations with your subjects. Are you using the bullets in a metaphoric way as well?

Essaydi: Everything about my work is metaphorical and symbolic. Working with materials associated with violence and blood, and trying to make it look beautiful and show that beauty can be made from anything. Women are strong, solid and beautiful. My work is also very autobiographical, so whatever happens in the work, whatever I am thinking or doing with my work, is what is actually happening in my life.

ArtsATL: Did you feel that it was the only way to convey your message?

Essaydi: It was a challenge. My first body of work was done in old palaces, and people were fascinated by these places and they missed the message. I knew I needed to spend more time to try to convey my message without having to support it with beauty and the architecture. I recreated, however, a little bit of these architectural designs through patterns and small touches throughout the pieces.

ArtsATL: You like to say that your work is a collaboration with your subjects — most of them are your friends and family members. How did you work with them?

Essaydi: I told them every single thing I was doing and why I was doing it, so we decided together how it was. They chose and once they chose, I was there with the camera, with the setting, and they would sit there, sometimes for one hour while I arranged every single aspect of the picture. Shooting is a very intense moment for me.