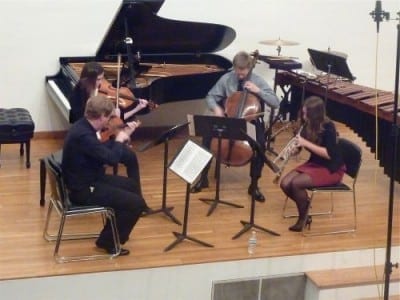 Just before 3 o’clock Sunday, the Atlanta Chamber Players’ “Rapido!” national finals were about to start, the culmination of an eight-month, 29-state composition contest (read more here). The audience was filing into the High Museum of Art’s Hill Auditorium. One of the judges, Atlanta Symphony Orchestra Music Director Robert Spano, asked the other judges — composer Michael Gandolfi and Atlanta Opera General Director Dennis Hanthorn — whether he should read through the scores before the concert or hear the music cold, like the rest of the audience.

Contestants had been given two weeks to compose a set of miniatures, four to six minutes in total and scored for a quartet of flute (with piccolo and alto flute optional), clarinet (with bass clarinet optional), cello and piano. In performance, ACP founder Paula Peace, a pianist, joined moonlighting musicians from the ASO. As the judges chattered amongst themselves and the house lights dimmed, the dilemma solved itself: Spano, at least, would rely on gut reactions and ears alone. 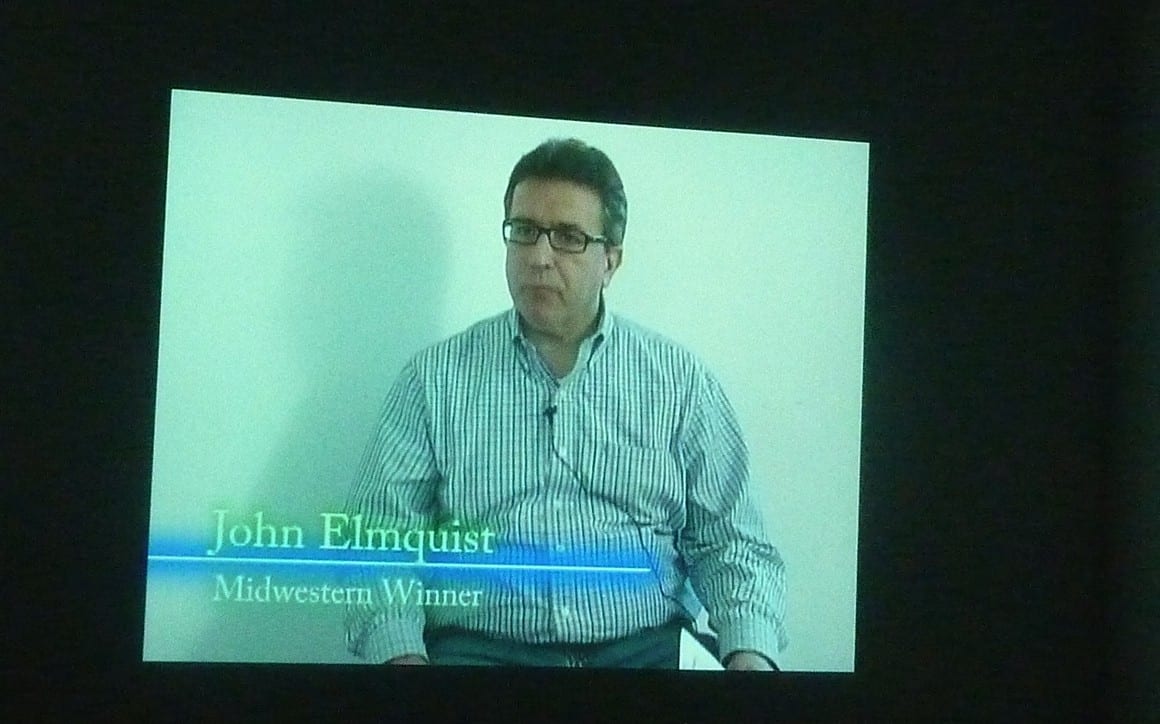 Chicago composer John Elmquist, from a video introduction to the "Rapido!" finalists. (Photos by Michael Moore)

Their pre-performance strategy might not have mattered. The winner, John Elmquist of Chicago, was the unanimous pick from the judges and probably the choice of most of the audience. Announcing the winner, Spano quoted Gandolfi: they were looking for “the awake factor,” where some pieces of music can jolt a listener’s attention, demanding we take notice.

Elmquist is a Chicago bass player, pianist, church musician and the founder of HardArt Groop, an ensemble to perform his music. His winning work, “Junk Shot,” is named after the failed initial attempt to plug the Gulf of Mexico oil spill last June, which was in the news when he was composing. It lasts seven minutes, comes in three parts and sounded painterly. The first section, “decessional,” is spare, without thickness or texture, yet illuminated by prismatic chords and a compelling weight, with tick-tock pacing and abstract globs of color. Like many of the works in this “Rapido!” finale, it had no real ending.

The second section, “on my shoe,” was memorable for a dance-club rhythm honked out by the bass clarinet (Alcides Rodriguez), with arabesques above from the flute (Christina Smith) and cello (Brad Ritchie). The piano part seemed mostly to involve supporting chords. Smith’s piccolo buoyed “fleur de plume,” a fragrant and attractive miniature loaded with hard-to-coordinate runs.

Elmquist won the $5,000 prize to beef up “Junk Shot” into a 15-minute work — to be performed next season in Atlanta, Boston and Chicago — plus a two-week residency at the Hambidge Center, an artists’ colony in the North Georgia mountains. 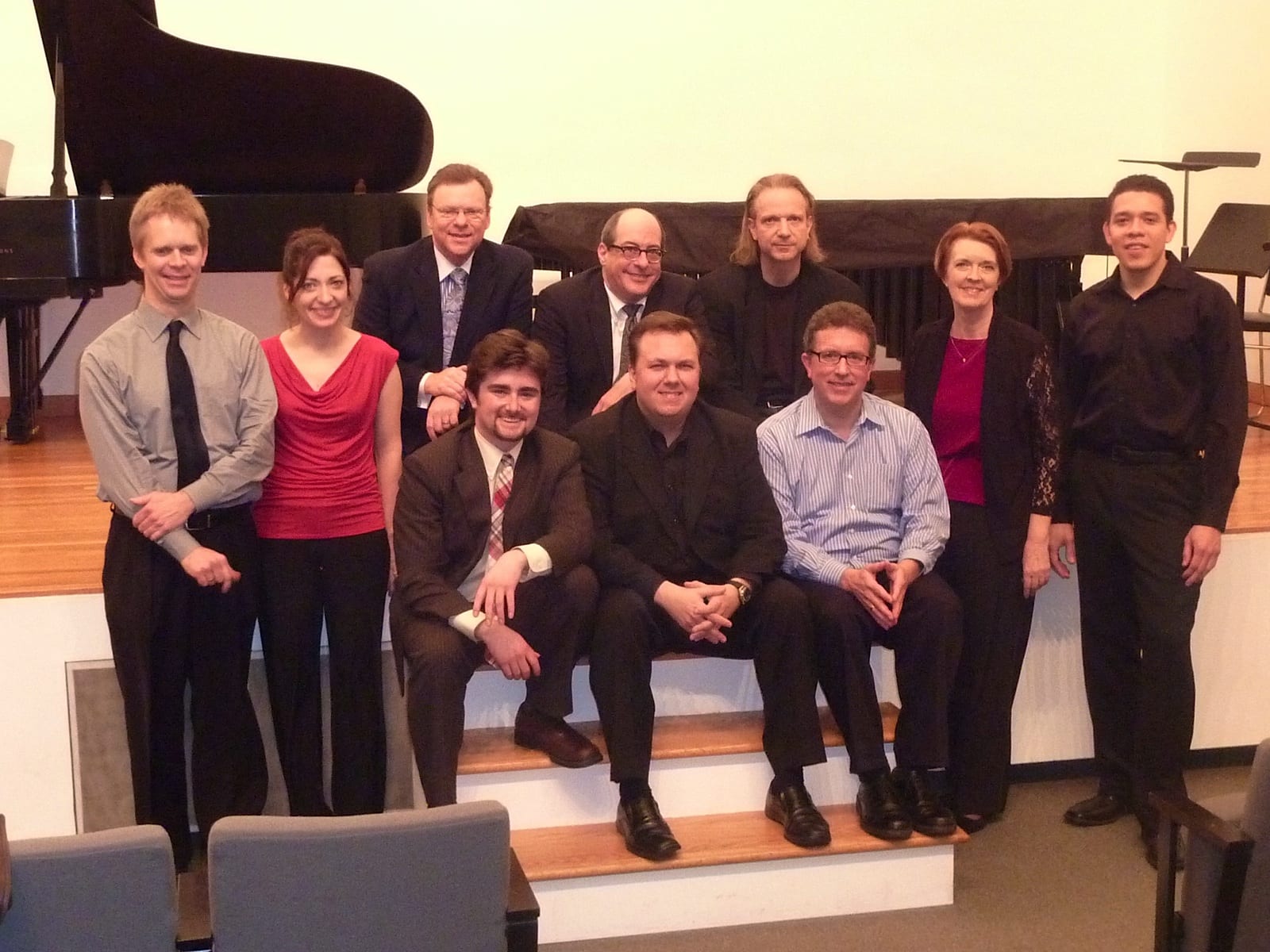 No second or third prizes were awarded, although Patrick Greene, living in Boston — who to my ears came in third — won the Internet-based “audience favorite” award, with a $500 prize. Nothing much happens in Greene’s wispy “AbstractEXTRACTION,” in four movements, although it was often pretty to hear.

Piotr Szewczyk, whose “Images From a Journey” won the Southeastern “Rapido!” semi-finals and had been performed in Atlanta in October, left the same impression Sunday afternoon: well crafted, often turbulent, uneven in communication.

The competition retains its value for discovering new voices and engaging audiences’ imagination for what’s possible, although for “Rapido!” to remain exciting in future years, some of its music will have to make a larger impact. The competition has to be dangerous; it has to be a place where the winners (or scandalously bypassed runners-up) matter, a place where reputations are made. None of the works in this year’s finals felt capable of greater things, although I remain optimistic. The process is smart; attracting higher quality composers to enter, or picking quarter-finalists with more potential, will be one way to advance the competition.

Past “Rapido!” concerts have sometimes held too much music on the program, or music that didn’t complement the newer scores. For this concert, the two introductory pieces served to put us in the mood. Benjamin Britten’s “Phantasy Quartet,” for oboe, violin, viola and cello, was composed when he was 19 as his Opus 2. Intriguingly, it was commissioned for a composition contest, in London in 1933 … but did not win. As the protagonist, ASO oboist Elizabeth Koch (photo below) elevated this compelling juvenilia sound into a radiant masterpiece. 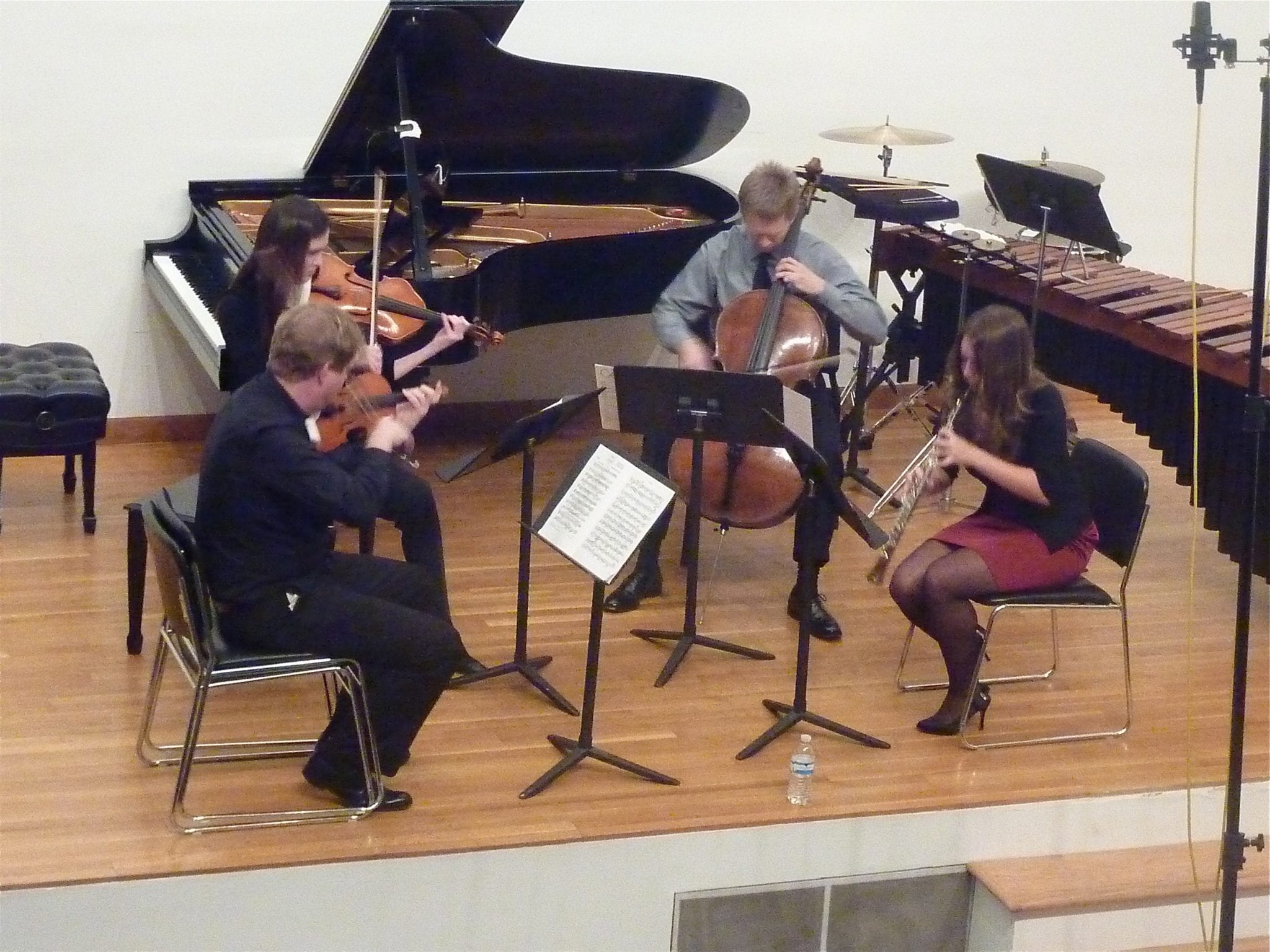 Jennifer Higdon’s “Zaka,” like much else at this concert, attempted to fuse a bond between the ACP and the ASO. It’s clearly Paula Peace’s strategy to make her chamber ensemble into the ASO’s semi-official chamber ensemble. Since the ASO has no in-house chamber music program, her plan seems to be working. Higdon, like Gandolfi, is a member of Spano’s “Atlanta School,” a group of non-Atlantan composers that continues to soak up most of the oxygen in Atlanta’s new-music scene. With beaming pride, Peace pointedly and repeatedly referred to the group as “our Atlanta School of composers.”

“Zaka” was composed in 2003 for Eighth Blackbird, a new-music troupe that, last June, played the world premiere of Higdon’s “On a Wire” with Spano and the ASO in Symphony Hall. “Zaka” is a zippy blast of fun, almost a TV cartoon superhero theme song, with a tranquil middle section that spreads wide and verdant. The full-fury finale was the very model of “the awake factor.”