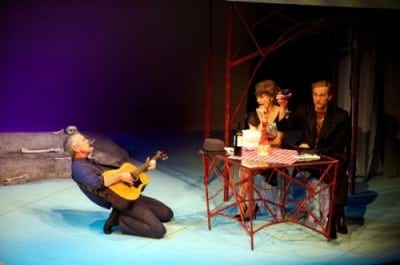 Review: Aurora Theatre offers love among the ruins with “Sirens”

Neil Simon crashes into Greek mythology in Aurora Theatre’s staging of the Deborah Zoe Laufer comedy “Sirens.” And, unfortunately, he nearly sinks it.

In fact, you could make the case that director Susan Reid has come full circle. Reid’s first work for the Lawrenceville theater was Simon’s “Last of the Red Hot Lovers,” in 2004 — which, along with his “Plaza Suite,” feels like a strong inspiration for “Sirens.” 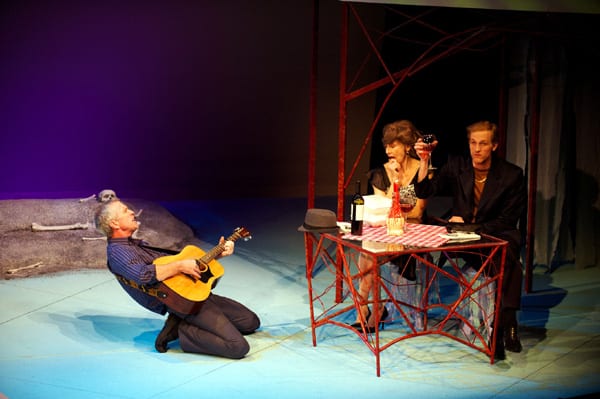 There’s the middle-aged and possibly Jewish married couple Sam and Rose Adelle Abrams, whose romance appears to have hit the rocks on the eve of their 25th anniversary. They started out romantically enough. To woo her when they were college kids, Sam wrote a song for her, and “Rose Adelle” became a pop hit whose royalties helped them raise their now-adult son.

But Sam (Steve Coulter) hasn’t had a hit since, and his midlife crisis has shifted into high gear. He’s trolling Facebook, flirting with newfound and younger girlfriends while searching for old classmate Alison Mendelsohn, who he believes will ignite another hit, a newfound passion or possibly both. Rose Adelle (Mary Lynn Owen), though still very much in love with Sam, has similar regrets. She wonders what might have been if Sam hadn’t written that damned song and she’d pursued classmate Richard Miller instead. 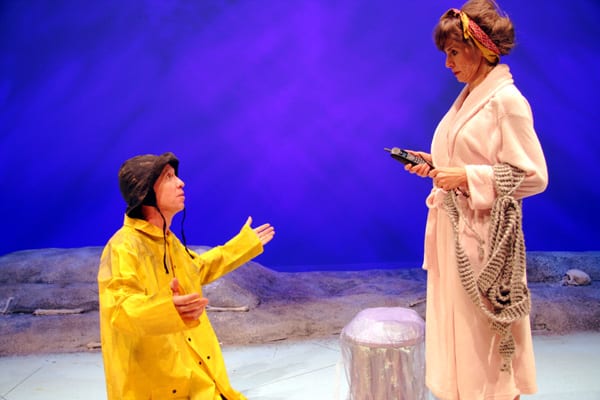 But instead of cheating, she books a Mediterranean cruise for them. High on the water, in the middle of a mini-confession about his Facebooking activities, Sam hears a siren call of what sounds like the melody he’s been searching for, and the next thing you know, it’s man overboard and possibly their marriage with it.

It’s just that, as the one-act play dragged on, there was the gnawing feeling that Laufer was trying to cover up too-familiar ideas with stranger decisions. Anyone who’s seen a Neil Simon comedy knows a harping married couple when they see one, and probably can figure out that through all the snappy wisecracks beat two hearts that will wind up back together. Tossing in the Greek myth of the siren proves diverting but ultimately, from a narrative standpoint, distracting and thin — especially in an ending that, while I won’t give it away, doesn’t adequately solve the artist’s creative frustration. 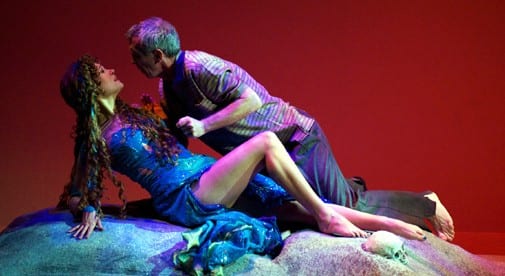 That’s the bad news. The good news lies in the cast and staging. Coulter and Owen have an easy chemistry. They act as if they’ve been married for years. Coulter gives Sam a tremendous stammer that accentuates his ambivalence, and when he says, “I can’t write anything true anymore,” you feel his pain. Owen is a cross between Jill Clayburgh and Blythe Danner, with all the sophisticated beauty and strength that implies.

Donadio is a knockout playing three roles, including the titular siren. With long legs that stretch carelessly over the island rocks, shoulder-length tresses and a piercing stare, she’s one of the true beauties of Atlanta theater. But as she has proved in works like “Suddenly, Last Summer” for Actor’s Express, she also possesses an emotional range that she puts to great comedic use here as she tempts and then dismisses Sam.

Director Reid makes nice use of Aurora’s dazzling new stage, working with lighting designer Jessica Coal and scenic designer Seamus M. Bourne to create a moody blue seascape for the siren scenes. (By contrast, the flanking scenes of the Abrams home and a dining scene feel a little tacked on.)

“Sirens” has its charms, and Reid and cast deserve full credit for mining those charms. But as Laufer’s story becomes more and more familiar, “Sirens” ultimately feels like an unfinished song.