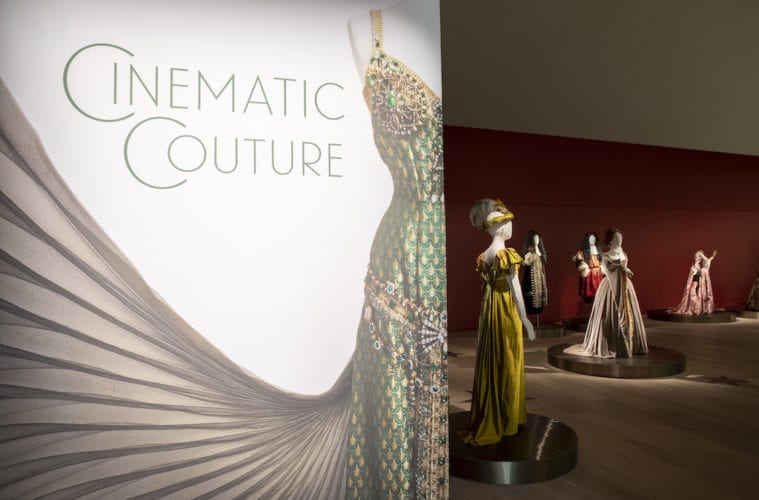 There’s a scene in The Duchess (2008) when Keira Knightley, as Georgiana, Duchess of Devonshire, dons a large auburn wig, wide with ringlets and curls, adorned with a massive pink-striped ribbon. In the scene, the hair ignites after catching on a candle, leaving it in frizzy ravages. Her full-volume, 18th-century powder-pink dress survives the catastrophe unscathed.

The aesthetics of Knightly’s costuming and hair make it one of the more important scenes in the visually sweeping film, and visitors to the SCAD FASH Museum of Fashion + Film have only a few more opportunities to see the look — the exact look, down to the charred wig — as part of the museum’s Cinematic Couture exhibit, on display until March 3.

Rafael Gomes, director of fashion exhibitions at SCAD FASH, expertly curated the exhibit with the help of SCAD students who work as docents at the museum.

“We studied historical hairstyles and perruques [wigs] throughout history, so [the students] were able to recreate accurate wigs for specific time periods for the exhibition,” he says. “Also, we were unable to use current dress forms, as they are a twenty-first century body shape not suitable for the selected corseted looks [of the costumes on display]. So, we studied silhouettes through the ages and had to meticulously carve and pad the mannequins to achieve the perfect body shape of the costume time period and the actors’ body size.”

SCAD FASH docent Tina Gancev also created a historically accurate bejeweled crown for one of the looks in the exhibit. The process took 52 hours to complete and included 3-D printing and the hand-adornment of the crown in Swarovski crystals. “Currently, SCAD enrolls nearly 5,000 students in entertainment-related disciplines, including costume design,” says Gomes. “This exhibition serves as a great resource for our students and is also a great way to share [with the community] the history of humanity through garments.”

Indeed, that’s one of the primary functions of film — telling the beautiful, complex stories of people’s lives at a certain moment in time, a certain place in history. And one of the key ways filmmakers do this is through the successful deployment of costuming. Costumes inform the way characters carry themselves, the way they speak. They tell audiences a great deal about a character’s economic and social station and provide important context for the story itself.

Says Gomes, “I am personally impressed with costumes that pay attention to detail on undergarments as well as the costume itself. The undergarments will completely change the posture of an actor and have huge influence on the role being portrayed. [They] transport the actor back to the historical period, accurately merging them into the character.”

Gomes is a big advocate for those minute details, a truth that’s evident in Cinematic Couture‘s exquisite curation. He traveled all the way to London, to Oscar-winning costume designer and collector John Bright’s esteemed costume house, Cosprop Ltd., to hand pick each garment for the exhibition. Bright, now nearly 80, began acting and making scenery for theater when he was just 14 years old. He would later make a career of designing and constructing clothes for the screen, founding Cosprop in 1965, right as television was beginning to be broadcast in color.

“The firm was an immediate success in that it seemed to fill the needs of the moment with color television, and many of the older costume houses going out of business,” says Bright. “In 1967, we were asked to work on The Charge of the Light Brigade and created costumes for many of the female characters. This is one of the few early films that looks as good today as when it was first released.”

The work of creating clothing for film is a type of artistry, thought Bright’s process involved less drawing and sketching and more hands-on work with fabric and garments.

“Although some of my contemporaries did the most wonderful drawings and even paintings,” says Bright, “I found that I worked better trying on clothes that were close to what I wanted and then adapting these designs for their final place in the production. In the workroom, we would then take a pattern from an existing garment or from a block pattern that had been taken earlier from an existing garment. Cloth color and trimmings follow on from this, and then we do the fittings and final adjustments.”

Gomes and the Cinematic Couture exhibit give visitors the opportunity to see the results of this process, allowing them up-close-and-personal access to the beaded cream dress and gossamer wings Drew Barrymore wore for her role in Ever After, to the stunning hand-bead work in one of Lady Edith Crawley’s flapper-era gowns from Downton Abbey, to period costumes worn by Nicole Kidman, Colin Firth and Meryl Streep. There are even costume pieces from Titanic on display.

Perhaps the most moving, though, is Gomes’ recreation of Eddie Redmayne’s pose in The Danish Girl, when Gerda (Alicia Vikander) paints him as he wears a delicate, ruffled, sheer gown over his masculine suit. In this scene, the audience watches Redmayne’s character at a very critical moment in the transition of his identity from Einar to Lili.

It’s a moving, potent scene in the film, and the feelings it elicits from viewers of the movie translate vividly to visitors of the exhibit, thanks to the effectiveness of the costume’s display.

That was part of Gomes’ aim in bringing the exhibition to SCAD FASH — relaying how the well-executed, historically accurate details of a character’s costumes help bring that person to life for an audience.

“I’m very happy to notice that visitors are leaving the exhibition with a better understanding of how much work goes into costume design and all of the intricate handmade details,” he says. “We hope that the exhibition will perhaps shift the perspective of those seeing films and encourage them to have a more critical and appreciative eye for the costumes they see on screen.”