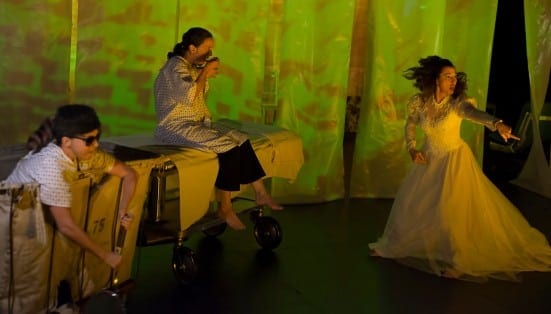 The new show Celles d’en haut, or in English Women on Top, has many rare and admirable qualities. It’s funny, bizarre, inventive, frightening and — sadly, all too rare in today’s theater — it’s genuinely interesting about and genuinely interested in women as its central focus. Although it’s often too frenetic and busy (unfortunately, those qualities are less rare) and there’s a raw, unfinished quality to the whole piece, I certainly had a fantastic time at a recent performance of the contemporary theatrical work. The show continues at 7 Stages’ main stage through September 20, with some performances in English and others in French with English supertitles.

Celles d’en haut is a co-production between two Atlanta theater companies: 7 Stages Theatre in Little Five Points and Théâtre du Rêve, which specializes in creating French language and French culture-themed productions. The experimental show is primarily a series of interrelated, surreal vignettes, but it loosely tells the story of Violet (Carolyn Cook), a no-nonsense, in-control stockbroker, wife and mother who has a bad car accident on an isolated road. Before help can arrive, she has a few strange encounters with the locals before finding herself at some sort of mental hospital nearby. She tells them she needs help, they examine her and it’s clear they start to think she needs, well, help, but of the sort that mental hospitals give out. She’s admitted to the place and begins to meet its inhabitants in a series of interactions so weird they bring to mind David Lynch, Alice’s trip to Wonderland or, as referenced in the play itself, Dante’s trip to hell. It’s the sort of show that’s hard to sum up, but there are pig masks, a character who eats wasps, an Elvis figure and (shudder) audience participation if that’s any help. The show is especially powerful for the variety in its many situations and stage images, which aren’t merely just bizarre but also genuinely inventive, curious and compelling. I especially liked Park Krausen as another patient (or a ghost? a figment of Violet’s imagination? it’s hard to say) who believes her husband died in the great Chicago fire: There’s a sharp hysteria to the weird character, but also a touching vulnerability.

There’s an overarching frenetic quality to the endeavor, and the show is actually at its best when things quiet down to a more sinister and ominous slow-simmer. The ending section in which Violet seeks to rescue another inmate from her possessive parents is interesting (that’s putting it mildly), but I couldn’t help but wonder why we left the asylum, which seemed as though it hadn’t been fully explored yet.

The simplicity of Kat Conley’s set exposes the spaciousness of the 7 Stages room, but its large-scale minimalism is too often interrupted by jumbles of other stuff: abundant and visible racks of costumes, props, stretchers, carts, furniture, etc. A screen, made up of panels that roll up or down like blinds, allows for large projections that act as a series of shifting backdrops for the performance. These work well to set the strange scenes, as when we first see the hospital or we’re in the waiting room, or else it provides a simple visual echo of what’s happening on stage.

Théâtre du Rêve commissioned Quebec playwright Olivier Kemeid to write the play and Belgian director Olivier Coyette to direct. Among the stipulations of the commission was that the project be written for women over 40, a task I think the writer has succeeded in doing with originality, insight and wit. Celles d’en Haut may not be everyone’s cup of tea, but its loose narrative and its unruly, rambunctious and often creepy approach to its subject will no doubt satisfy those who have been craving something different in Atlanta theater.