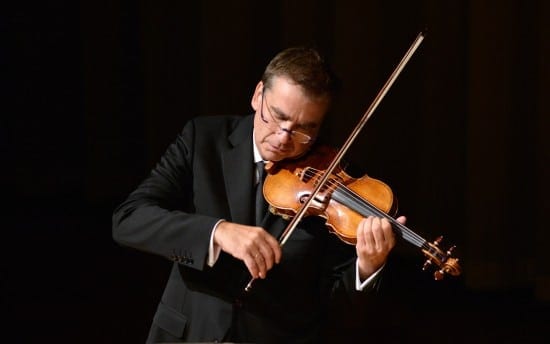 This past Friday, the Atlanta Chamber Players opened their 40th season with a concert of music by Brahms, Mozart and Chausson, featuring guest violinist Robert McDuffie. The performance took place at The Carter Center’s nondenominational Cecil B. Day Chapel. The concert began 15 minutes late, as McDuffie was still in transit to the chapel when curtain time arrived.

In the end, that seemed not to matter to the audience, as McDuffie and ACP’s artistic director and pianist Elizabeth Pridgen opened with an engaging performance of a repertoire favorite, the Violin Sonata No. 1 of Johannes Brahms.

A native of Macon, Georgia, who currently lives in New York City, McDuffie had the printed violin part on the stand in front of him but it was evident he was performing most of it from memory. McDuffie swayed and intense emotion showed on his face as he brought forth a vibrant, passionate sound from his 1735 “Ladenburg” Guarneri del Gesù violin.

Pianists, however, are not as fortunate in terms of bringing their personal instrument with them, being limited to one provided for them on location. Pridgen played brilliantly, but the Steinway & Sons piano provided was not so brilliant. Curiously, it had a somewhat muted overall timbral quality in comparison to McDuffie’s violin, as well as to the instruments of other musicians yet to perform. This Sonata by Brahms is very much a collaborative effort between violinist and pianist rather than violin with a lesser mere accompaniment, so the instrument’s tonal clarity and capacity to faithfully render the pianist’s coloristic abilities as an equal partner matters a lot. On the positive side, Pridgen’s piano did not overwhelm in volume nor was its sound brittle. However, it did pose a few musical challenges, especially during passages where the violin and pianist’s right hand were in a genuine duo and the musical lines equally important. The fault here was not Pridgen’s playing in the least, rather the instrument itself.

In a letter to his father shortly after the premiere in 1784, Mozart wrote, “I myself consider it to be the best thing I have written in my life.” It is a work in which charm prevails, but which does not disguise its unabashed seriousness as a significant chamber composition. The piano’s prominent role in the piece may at times seem disproportionate, almost concerto-like, the exception being the slow second movement. Here again Pridgen played through the piano’s shortcoming to take charge of the ensemble and merge musically with the brighter, forthright winds.

After intermission, the final work on the program was the Concerto in D major for Piano, Violin, and String Quartet, Op. 21, by French Romantic composer Ernest Chausson. McDuffie and Pridgen were joined in the performance by violinists Helen Hwaya Kim and Kenn Wagner, violist Catherine Lynn and cellist Brad Ritchie for the unusually scored four-movement work. The 40-minute piece is less a “concerto” than like a sextet with prominent, often brilliant, violin and piano parts, performed by McDuffie and Pridgen, accompanied by string quartet. There are extensive passages in the work for solo violin and piano duo only, and there are others without the solo violin — effectively piano quintet music. Only for a few brief passages did the accompanying quartet have opportunity to be heard on its own. In that respect, it is a curious but fascinating chamber work.

It was the showpiece of the evening, effectively displaying the virtuosic capabilities of both McDuffie and Pridgen, and ending the concert with a bang.

McDuffie is scheduled to perform again in Atlanta this coming June, when he will be featured soloist in a work composed specifically for him, Philip Glass’ Violin Concerto No. 2, “The American Four Seasons,” with the Atlanta Symphony Orchestra. Later that same month, with the Toronto Symphony, McDuffie will premiere a new concerto for violin and rock band by Mike Mills, a founding member of the alternative rock band R.E.M.