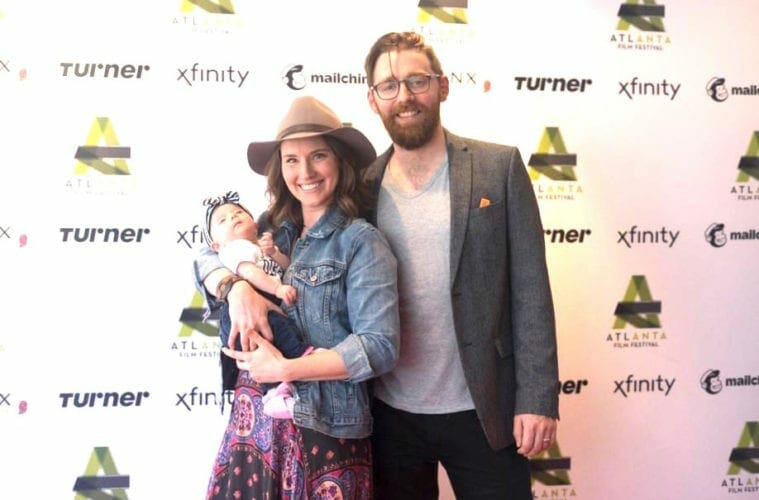 Matt Torney, 38 (pictured with wife Amber McGinnis and daughter Isla May), will become the sixth artistic director in Theatrical Outfit's 43-year history. Look for the Torneys to be in Atlanta full time early in 2020.

Matt Torney, 38, associate artistic director at the Studio Theatre in Washington, D.C., has been chosen to lead Theatrical Outfit when Tom Key steps down at the end of the season.

The Studio, about three times larger than the Outfit, is producing 10 plays on two stages this season. Theatrical Outfit is producing six plays on one stage this season, but Key has said he sees a second, and possibly third stage, in the theater’s future. “My work is grounded in the idea that theater, and other live art forms, are a vital response to a world that is becoming increasingly displaced onto digital platforms and virtual communication,” Matt Torney says on his website.

Torney, a native of Belfast, Ireland, will become the sixth artistic director in the Outfit’s 43-year history. He has directed on both sides of the Atlantic and has been nominated for numerous awards, according to a Theatrical Outfit press release.

Before joining the Studio in 2015, Torney was the programming director at Origin Theatre in New York and associate director of Rough Magic Theatre Company in Dublin. He moved to the States full time in 2006 to complete an M.F.A. in theater directing at Columbia University. He is married to filmmaker Amber McGinnis.

Applications for the artistic director position came from 56 individuals and from cities and states across the country, including Atlanta, Outfit board chairman Ed Laity said in the statement. “Our search committee was blown away by the interest in this position. . . . The quality of the applicants was high caliber, which made the vetting process very difficult.”

“Matt emerged as a leader who is truly ready to serve our world with the glorious gifts of the theater,” Key, 69, said in a statement. “In his already successful and impactful career, he models our values: artistry, community, inclusion and integrity. He embraces our vision and mission. . . . I know deep in my soul, he has the heart, the mind and the character to take Theatrical Outfit to its brightest and best level yet.”

A series of events are planned over the next few months for theater patrons and Atlanta’s artistic community to get to know Torney and his wife. Torney will present his plans for the 2020–21 season early next year.

Key, who joined Theatrical Outfit in 1995 and spearheaded its move to the Balzer Theater at Herren’s in 2005, will continue to work as a director and actor when he steps down as artistic director next year.