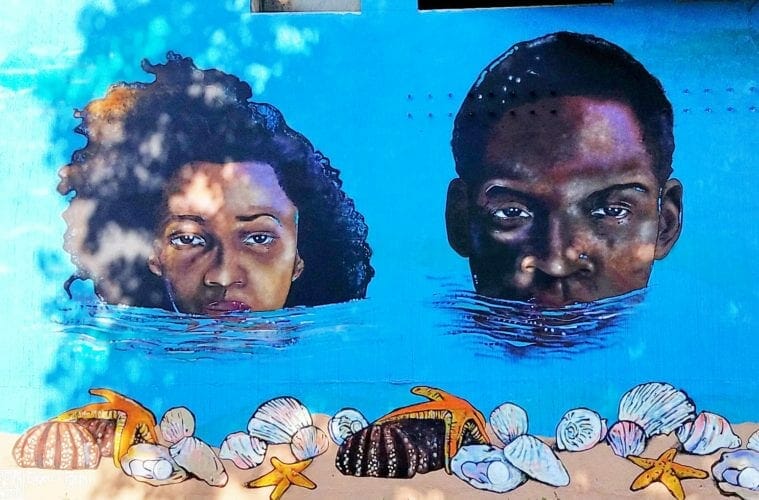 Eugene V. Byrd III's mural is one of eight that are new on the Northeast Trail behind Mason Fine Art at 415 Plasters Avenue NE.

The murals can be seen on the BeltLine’s Northeast Trail behind Mason Fine Art at 415 Plasters Avenue NE. A jury chose Nazario “with a nearly perfect score,” says curator Miranda Kyle, the BeltLine’s arts and culture manager. “There was a resounding consensus that it was vital for us to support all of our BeltLine communities, and make our public-art dialogue more intersectional. We also work very hard to provide a safe space for new and emerging artists, to learn, try for the first time, to fail and to try again.”

Nazario had never created a mural before. She did this one with support and guidance from Living Walls’ Monica Campana and friends. “For a debut mural, she knocked it out of the park,” Kyle says, “and we are so proud of her.”

Maite Nazario, a Guatemalan-born artist, moved to Puerto Rico at age nine and to the United States as a high-school freshman. Changing homes and landscapes, she felt the push and pull of being an immigrant. She wanted to hold on to her family story and traditions but needed to be embraced by her new communities.

A true creative who found her voice through art, Nazario made it her mission as a Latinx, immigrant, queer woman to become a social activist, producing artwork that showcases love rarely shown in mainstream media. “To be able to look at other people and see yourself and your experiences in them is something that most cisgender people take for granted. But for us, having spaces just to exist and meet each other is a rarity.”

Her mural is a part of a series of drawings and paintings of queer couples based in Atlanta and titled #ourlove. The artwork has a storytelling aspect that’s just as important as the lines that are created. The resilience of queer people of color and the everyday resistance they are forced to live through is depicted and celebrated. She was so excited to get the go-ahead for the project because, Nazario says, “Atlanta needs to see more underrepresented people.” Maite Nazario’s Atlanta BeltLine mural — her first-ever mural — depicts friends of hers who are in a polyamorous relationship. (All mural images courtesy of streetartmap.org)

A sunny colored circle illuminates the heads and hearts of a couple that is obviously in love, bathing them in warm energy. One lover is laying their head on the shoulders of the other, and wildflowers grow from the shoulders that are not touched, showing the tenderness of baring a shoulder to lean on. Maite Nazario at work on her BeltLine mural. The painting includes a QR code that viewers can use to learn more about the people pictured.

These aren’t random people painted from Nazario’s imagination. They’re her friends Kenie and Dionne, who’ve been together in a polyamorous relationship for more than a year. Onlookers can learn about their bond by scanning the QR code painted on Kenie’s overalls.

The story of how they met, the struggles in their relationship, their feelings growing up as queer people of color and not seeing themselves represented in the media, their ultimate wish to see more queer people of color depicted in art in which the focus is not tragedy and violence are all part of an interview you can hear by using the code.

“We don’t usually have a platform to tell our stories,” Nazario says. “The QR codes are an access to a portal with so many love stories. It’s a safe space for queer people.”

The #ourlove series is a way to thank the LGBTQIA+ community that embraces her. In fact, she invited like-minded individuals to take part in a flower-painting ceremony the day the mural was unveiled.

The flowers, she wrote on her Instagram page, “represent how all of our individual efforts make up the magical sense of family we have, how we all make big and small sacrifices for each other. We are so worthy, we deserve to be seen, our love matters.”

“Making more statements of queer people taking up space and telling our stories” will continue to be Nazario’s focus. “I’m doing work that says we are loving and living, we are here and queer and aren’t going anywhere,” she says. “A lot of people get praise after they are dead. I want to celebrate my friends while they are alive.”

Nazario also joined four other queer artists of color to create the second of two murals for  Living Walls’ Start Talking. Stop HIV campaign. Look for it on the BeltLine’s Westside Trail, at 590 Cascade Avenue SW.