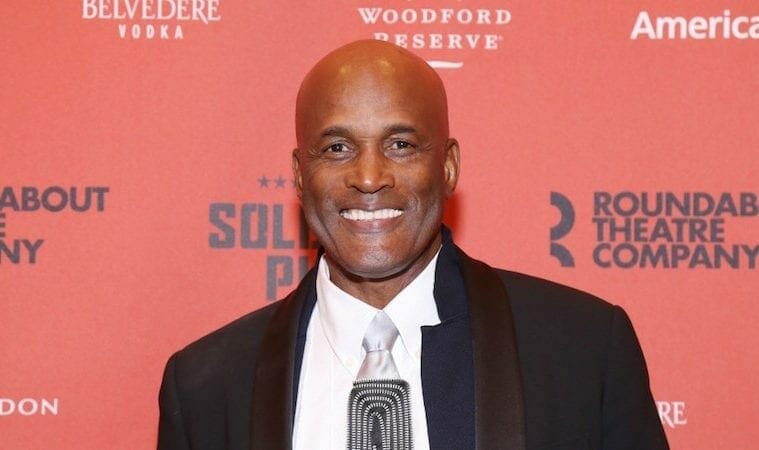 Kenny Leon made his Roundabout directorial debut early this year with "A Soldier's Play." (Photo by Joseph Marzullo)

Leon, who will become senior resident director, made his Roundabout debut directing A Soldier’s Play on Broadway early this year. It received seven 2020 Tony nominations, including best revival of a play and best director for Leon. Blair Underwood and David Alan Grier were nominated for acting awards, as were the drama’s scenic, costume and lighting designers. COVID-19 has put the ceremony on hold. Blair Underwood and Kenny Leon in rehearsal for “A Soldier’s Play.” (Photo by Jeremy Daniel)

As senior resident director, Leon will tale part in Roundabout’s play and musical selections, including its seasonal onstage productions and the dozens of workshops and readings produced every year. He’ll also develop the careers of up-and-coming directors who are Black, Indigenous or people of color, and play a key role in Roundabout’s commitment to fighting racism and increasing equity, diversity and inclusion.

“My experience directing Charles Fuller’s A Soldier’s Play at Roundabout was an amazing moment in time,” Leon said in a statement. “I look forward to exploring other works on its stages as we continue to help develop artists in an effort to help build an American theater that looks like the world.”

Leon, 64, won the best director Tony Award in 2014 for A Raisin in the Sun with Denzel Washington and LaTanya Richardson Jackson. He directed American Son (2018) and its subsequent Netflix adaptation, and August Wilson’s Fences and Gem of the Ocean, among other Broadway shows.

He cofounded the August Wilson Monologues Competition (seen in the documentary Giving Voice, which drops on Netflix this Friday) and has directed such TV projects as the NBC musicals Hairspray Live! and The Wiz Live! Leon also is on the board at New York’s Public Theater and wrote the memoir Take You Wherever You Go, published in 2018.

“The great artistry of Kenny’s revival of A Soldier’s Play revealed the possibilities of what Roundabout can, and should do,” artistic director and CEO Todd Haimes said in a statement. “Roundabout has historically played a large role in which great works of the American theater get revived in New York. Moving forward, we will take our newly embraced responsibilities further, to expand the canon.”

Roundabout, which produces on Broadway and off, was created in 1965 to celebrate the power of theater, spotlight classics, cultivate new works and educate minds for the future. Its leadership has historically been male and White. Haimes has led the company since 1983.

Leon cofounded Atlanta’s True Colors Theatre Company in 2002 and remained its artistic director through 2019. He now holds the title of artistic director emeritus. He spent a decade as artistic director of the Alliance Theatre, one of a few African Americans to lead a major regional theater. During his tenure (1990–2000), the Alliance staged premieres of Pearl Cleage’s Blues for an Alabama Sky, Alfred Uhry’s The Last Night of Ballyhoo and the Eltono John–Tim Rice musical Aida.