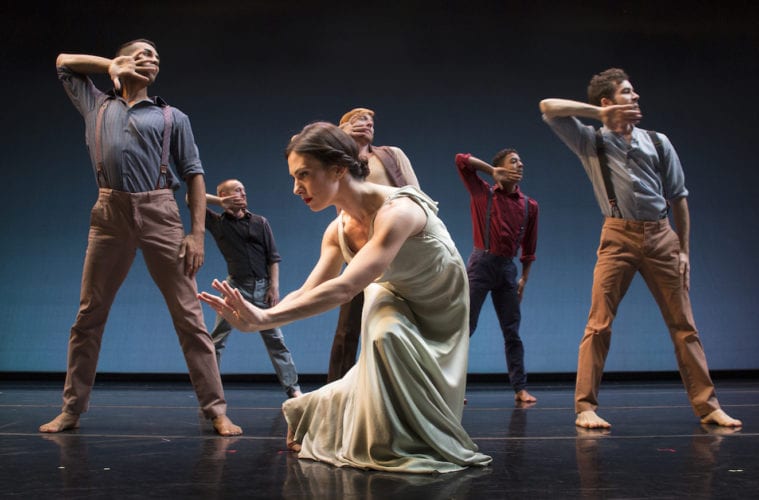 BODYTRAFFIC will perform And at midnight, the green bride floated through the village square… (Photo by Tomasz Rossa)

BODYTRAFFIC to debut works by Israeli choreographers at KSU

On March 27, the Los Angeles-based dance company BODYTRAFFIC will bring works by acclaimed Israeli choreographers Barak Marshall and Hofesh Shechter to Kennesaw State University’s Dance Theater as part of the four-day American College Dance Association (ACDA) Southeast Conference. It’s an unusually dark and challenging program, but it shows the intellectual rigor and creativity of Israel’s contemporary dance scene. For BODYTRAFFIC’S Tina Finkelman Berkett, it also embodies a commitment to her identity as a Jewish artist.

Ivan Pulinkala, Dean of KSU’s College of the Arts, asked Berkett and Lillian Rose Barbeito, the founders and artistic directors of the company, for two works: an excerpt from Marshall’s And at midnight, the green bride floated through the village square…, a tragedy about a jilted bride, and the London-based Shechter’s Dust, based on an earlier work of his about the forces of evil. Most mixed-bill dance concerts combine light and entertaining works along with more serious, thoughtful or philosophical pieces, with sound scores to match. Pulinkala makes no apology for the dark tone of BODYTRAFFIC’s program. “I wanted to curate works that had substantive intellectual and choreographic depth. The movement invention, technical excellence and artistic depth took precedence” over the mood, he says.

Marshall’s work is a highly gestural piece with sequences of intricate, fast-paced hand and arm gestures inspired by traditional Yemenite dance. Berkett says, “Barak has such a singular and distinctive choreographic voice. What’s special about this piece is the way he brings those movements into the world of contemporary dance today. It encourages each of the dancers to show their individuality and internal struggles, and there is a lot of interaction between the dancers and the audience.”

The green bride is set to a soundtrack of Jewish love songs and hymns from the Yiddish, Ladino and Yemenite traditions. The work is a morality tale peppered with dark humor. It tells how jealousy dooms one family’s children to lives of rage, unhappiness and loneliness. The original version featured narration by Marshall’s mother, Margalit Oved, a respected Yemeni dancer and choreographer who taught in Los Angeles for many years. She based the narration, in part, on a true story about a large family who were neighbors of hers in Aden, Yemen. They fought, screamed and cursed so intensely, day and night, that their house became known as “The Burning House.” Oved is aging and can no longer perform. Now the dancers tell the story with spoken word and gesture. The piece used to end with the bride shooting and killing the wedding guests, but the company changed the ending last year after the mass shooting in a bar in Thousand Oaks, California, a suburb of Los Angeles. That tragedy took place just 11 days after the deadly attack at the Tree of Life — Or L’Simcha Congregation in Pittsburgh. “You’ll still see the bride in a fit of rage over her groom not being there, and a scene of mass chaos, but we don’t depict the shooting anymore,” Berkett explains.

There’s one aspect of the green bride that audiences won’t see. Because it is so complex and difficult to perform, dancers new to the company learn this piece first. If they can handle it, Berkett knows they can handle anything in the repertory. Atlantan Jamal White, who joined the company in 2017, passed the test and will perform with the ensemble in the upcoming show.

Pulinkala’s focus on Israeli dance both in the KSU Dance Department and at the ACDA conference dovetails with the way Berkett expresses her art in BODYTRAFFIC’s repertory. “Marshall’s work is exactly the kind of piece we want to be doing. I feel it showcases BODYTRAFFIC at its best,” she says. “Supporting an Israeli artist, whose piece is really dance theater, is so important to me.”

Founded in 2007, BODYTRAFFIC achieved acclaim early on, breaking through the West-East divide that often shuts out Los Angeles-based companies from New York’s contemporary dance scene. The troupe received a warm welcome at Jacob’s Pillow Dance Festival in 2010 and enjoyed a successful debut at New York’s Joyce Theater in 2012. That same year, BODYTRAFFIC brought Marshall’s Monger to the Off the EDGE Festival at Georgia State University’s Rialto Center for the Arts. The company celebrated its 10th season in 2017–18 with an international tour to more than 20 cities including Moscow and St. Petersburg. Berkett still performs with the company; Barbeito recently retired from dancing.

Early on, Berkett says, they developed a bucket list of choreographers they wanted to work with. “Hofesh Shechter has always been at the top of that list. We love his work,” says Berkett. “The fact that he’s an Israeli artist was another reason I wanted to support him, and for BODYTRAFFIC to be a vehicle for his voice.”

Shechter’s Dust, the second piece on the KSU program, is about the human tendency to follow blindly, even when a leader’s agenda is pure evil. “At the end, you hear Hitler’s voice, and you can’t help but cringe,” Berkett says. “I come from a family of holocaust survivors, and for me, including Hitler’s voice was an overwhelming artistic choice.” She describes the heavy drumbeat that accompanies the choreography, the blank stare of the dancers as they follow their leader. It requires intense focus from the dancers and takes a lot out of the audience too, she says, but she feels the message is too important to ignore.

The company usually includes lighter pieces on its programs to showcase the dancers’ diversity and give audiences a variety of moods. “Of course in this day and age, we want art to be uplifting and hopeful, and so much of BODYTRAFFIC’s repertory has that agenda,” says Berkett, “but we also believe in making works that are thought-provoking.”

The KSU program will give audiences a chance to enjoy the brilliance of two Israeli choreographers and the technical prowess of the dancers while contemplating the shadow side of human nature — the hate and the rage that we see daily in the headlines. The arts can entertain. They can also give us an opportunity to process the darkness.