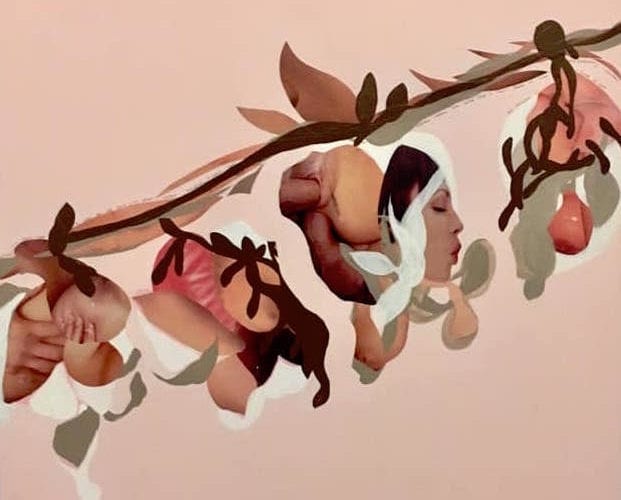 After Squishiepuss: Feminist art trumps misogyny with If I Told You . . . stories

One of the most interesting grammatical idiosyncrasies of German is a verb tense called “subjunctive II.” It means speaking about the past in conditional terms and is a brilliant use of language because one can refer to something that happened but still express doubt about truly knowing the details. This is the German equivalent of “allegedly,” although more specific, and is especially popular with German news reporters and lawyers when discussing sensitive legal issues.

English doesn’t offer a similar way to discuss what might or might not have happened. Writers can use “allegedly,” “claimed” and “purported” to avoid defamation and/or slander, but in today’s #MeToo world, “allegedly” and the like have become weasel words that may make it seem like reporters don’t #BelieveWomen. In truth, it’s just doing one’s due diligence. All this is to say that Atlanta artist Ray Geier allegedly abused women. The issue hasn’t gone to court, and there has been no conviction. The accusations were primarily leveled via social media in early January. On the eve of opening a new art gallery named Squishieland (after his iconic, infamous drawing of a pink French bulldog/octopus character), allegations about Geier’s behavior came from more than 30 women posting on Facebook. The allegations included harassment and physical abuse. By late January, most of his Atlanta murals had been covered up.

Geier’s isn’t the only troubling news in Atlanta’s arts world. In early February, the prominent nonprofit WonderRoot placed cofounder and executive director Chris Appleton on leave after artists and former employees posted an open letter on Instagram accusing him of abusive behavior and demanded his removal. Appleton resigned 10 days later. WonderRoot hired an independent investigator to sort out the claims and is looking for a new leader. Appleton is what the board calls “consulting.”

The Appleton and Geier situations aren’t related and aren’t exactly parallel, but both involve accusations of degrading women in one way or another. The Geier issues date back to 2011, when he used the misogynistic Twitter handle Rayspitsongirls. Although many of January’s critical Facebook posts were deleted on legal advice, the damage had been done. Geier lost the contract on his gallery-to-be at Grant Park’s new Beacon development. Word is that he left Atlanta and is living in Tennessee. Allegedly. We can’t confirm this, but he has all but disappeared. Strong Is the Water, As Am I by Sierra King

A feminist show titled If I Told You . . . replaced Squishieland at The Beacon and runs through March 28. The work and related events deal entirely with the harassment and assault women face. The artwork is visually intriguing, the viewing experience powerful.

The project’s goal, says co-curator Lauren Harris, has been to provide a safe space for women and men to have conversations about sex and the power issues it raises, and for women’s voices to be heard through their art. If I Told You . . . organizers and artists likely will produce more of the same kinds of exhibitions going forward, she says.

If I Told You . . . represents ongoing change in the Atlanta arts scene, where national-level issues like #MeToo are being addressed on the local level. The scope of the problem of misogyny in Atlanta remains to be seen. What this moment does tell us is that the arts are not immune to abuse. In Asheville, North Carolina, for example, artist Jonas Gerard faced sexual misconduct charges. The common thread between what’s happening in Atlanta and what happens everywhere else: Many people knew about abusive behaviors before they exploded publicly. Story after story on these issues include the line “There have always been whispers about . . . .” This speaks to the complacency that existed before #MeToo erupted.

If I Told You . . .’s goal is clear in the paintings/collages of neo-feminist pop artist Yun Bai. What look like traditional woodblock prints of cherry blossoms in cheerful colors are actually more disturbing. Look closer, and you see that the cherry-blossom petals are collaged images of pornography. This juxtaposition creates dissonance and reflects some truths behind sexual trauma — people can walk past it and never see what’s really there. The show also makes space for audience engagement, giving visitors a chance to let go of some of their own traumas.

“Anyone who comes to the gallery and has experienced any sort of sexual harassment or violence is welcome to share their story anonymously by writing it down on postcards we have available,” says co-curator Gina Livingston, founder of Atlanta’s Medium Arts. “We wanted to make sure that the gallery encompasses as many voices as want to be heard but realized that some people might want to do so anonymously.”

The stories collected since If I Told You . . . opened on February 14 will be displayed at the March 28 closing.

The show has featured public events on abuse and harassment issues, with participants including artist/activist Jessica Caldas, lawyer Jason Prine and Ulester Douglas of Men Stopping Violence. This gives the visual arts community a place to deal with fallout from the Geier and Appleton controversies and sort through some legalities of callout culture. The conversations have wrestled, in part, with social media’s power to “cancel” someone, a term used by young people for calling someone out and shaming them until they disappear.

The power of speech is a key concern in If I Told You . . . and goes beyond the anonymous gallery cards. Included is Melissa Alexander’s confession booth — one part sculpture, one part therapy and one of the more eye-catching pieces to be seen. Its white wood and plush red velvet seating evoke the Catholic rite of forgiveness. But instead of being forgiven for their sins, viewers are forgiving themselves of harms that have weighed on their souls. Alexander interviewed people who’ve been abused in a confession-booth setting and is creating a short film that will screen on the exhibition’s final day.

Like any good art show, this one has its detractors. Artists say they’ve received pushback, with some community members calling the show part of a witch hunt, since Geier has never been officially charged with a crime. While there have been no big counter-show protests, there have been generalized grumblings from men uncomfortable with #MeToo in Atlanta. There’s no denying that the power of #MeToo, first a national conversation (Matt Lauer, Garrison Keillor, R. Kelly, Michael Jackson, etc.), is now a local one. This is a peculiar moment in America’s relationship to the power of social media, too. Panelists at an If I Told You . . . discussion concluded that callout culture helps adjust bad behavior that can’t otherwise be addressed.

Perhaps being called out and canceled (Geier) or resigning (Appleton) was the best thing for both men and Atlanta’s arts scene. The anti-Geier movement argued that a new gallery would give him power and access to young, eager artists and that he’d leverage it to continue hurting women. WonderRoot supporters questioned whether the nonprofit could continue with Appleton in charge.

Callout culture and online shaming serve a social purpose, says Prine. There are behaviors — like being a misogynistic, manipulative dude — that aren’t illegal but are socially unacceptable. The legal system doesn’t always have a place for these accusations. Taking someone like Geier to court likely would be more damaging for his accusers than for him. So social media callouts are a way for society to let off steam, reset the course and redefine what the accepted norms will be moving forward.

Caldas, an artist and activist, talks about “radical forgiveness” and calls it a missing and crucial part of the conversation. The artist, a sexual assault survivor who did not know Geier, says that because her work deals with serious emotions, she’s come to believe that people can and should be able to change.

“Removing people from society who have done bad is important,” she says, “but we need space for them to learn and get better. Otherwise, they will continue those behaviors.”

Anyone in a Geier or Appleton situation might want to consult the men’s education course at Men Stopping Violence. “You don’t have to hit someone to abuse that person,” its website says. “In fact, many men . . . have never physically struck another person in a relationship. They have, however, used a wide range of controlling and abusive behaviors over a sustained period of time establishing a pattern.”

Perhaps shows like If I Told You . . . can be a step toward positive change.