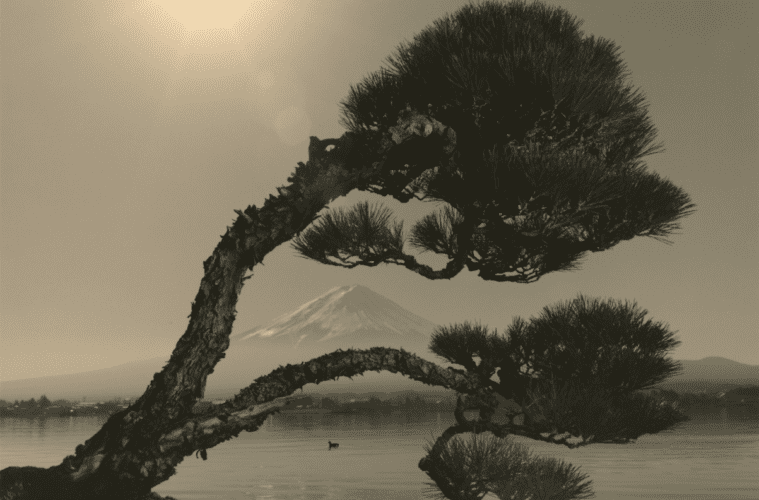 The seeming-landscape photography of Yamamoto Masao’s new body of work at Jackson Fine Art presents an obvious parallel. Landscape photography proceeds from reality to a miniature view of it, limited and composed by the photographer’s eye and created through a well-defined process to be seen. Yamamoto’s Bonsai — Microcosms Macrocosms, on view through June 29, is a set of monochrome portraits of the cultivated trees, which are themselves real trees made small and thus framed by the bonsai master’s eyes and hands and meant to provide a source of contemplation for viewers.

Thus, both art forms cycle nature back to the viewer through artistic processes, and the viewing itself provokes a recycling as the viewer’s mind returns to the object’s source material. 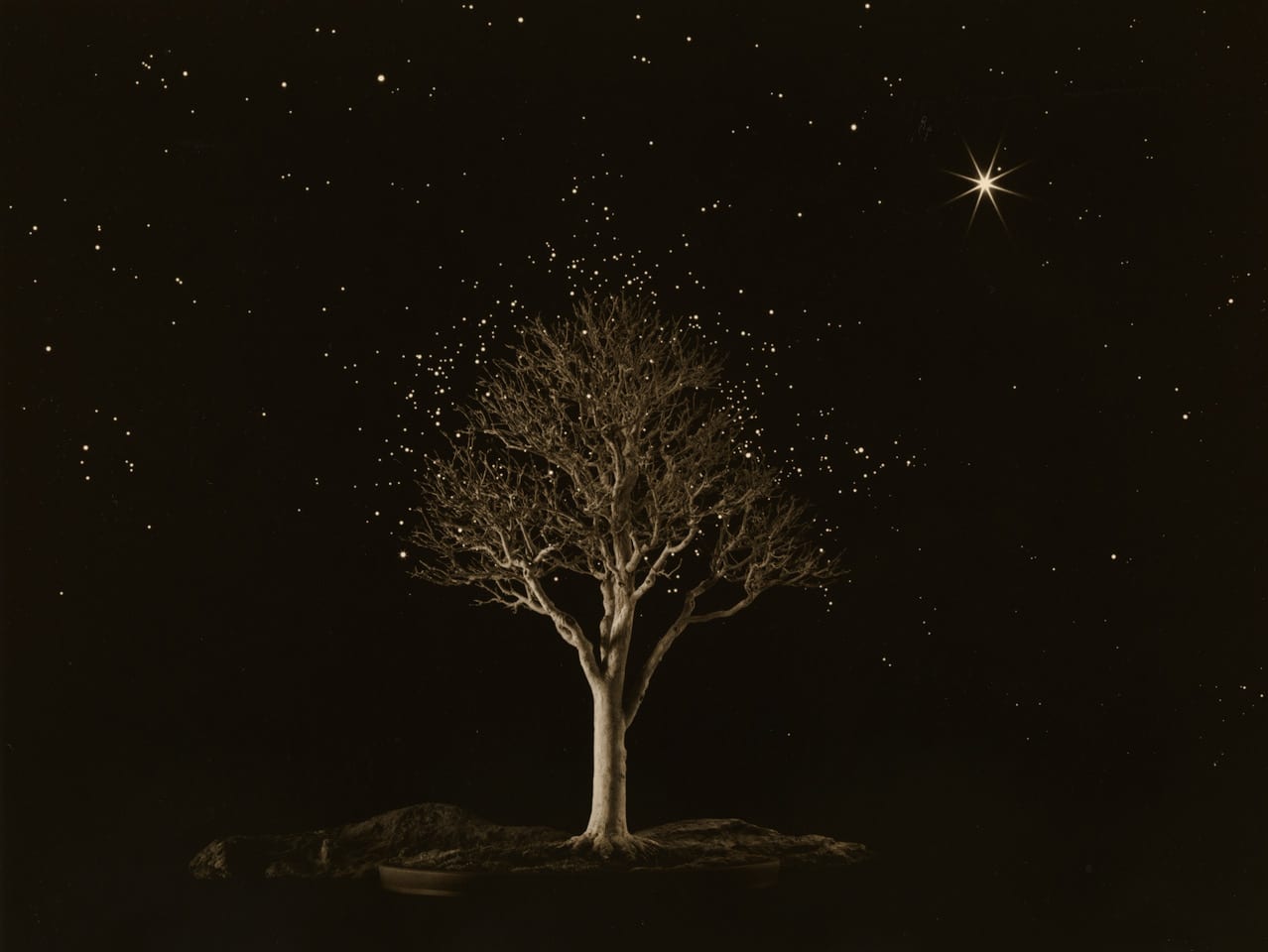 The photographs here are small silver gelatin prints on toned paper, framed with silk mattes. Yamamoto’s skill as a printer is well-established. The nostalgic aesthetic of matte and paper match well the often melodramatic images.

Yamamoto has taken bonsai (all created by Minoru Akiyama) and placed them in dramatic natural settings, often obscuring their actual size in the process. So, the move from reality to idealization takes another turn, cyclically returning the trees for the viewer to the actual world. This is not an overwhelming conceit: Often the curving edge of a bowl is visible. The goal is not to trick the viewer but to start a visual dialogue between the bonsai and the natural world and thus note that all images of something are not, really, that thing.

Other photographs here employ a more overtly staged design: a bonsai backed by an ink-black sky, with “stars” as a halo, for example — the starry sky is a drop cloth with holes in it. The insouciance of the scene is like a child’s storybook, the tree a bedtime story.

Nearly all of the photographs place the tree in the center of the frame, a choice somewhat at odds with bonsai’s principle of asymmetry. Several images are shot into the sun. The flare instinctively causes the viewer’s eye to glance away, landing on the centrally placed bonsai. Any photograph into the sun also evokes a strange overwhelmed feeling. 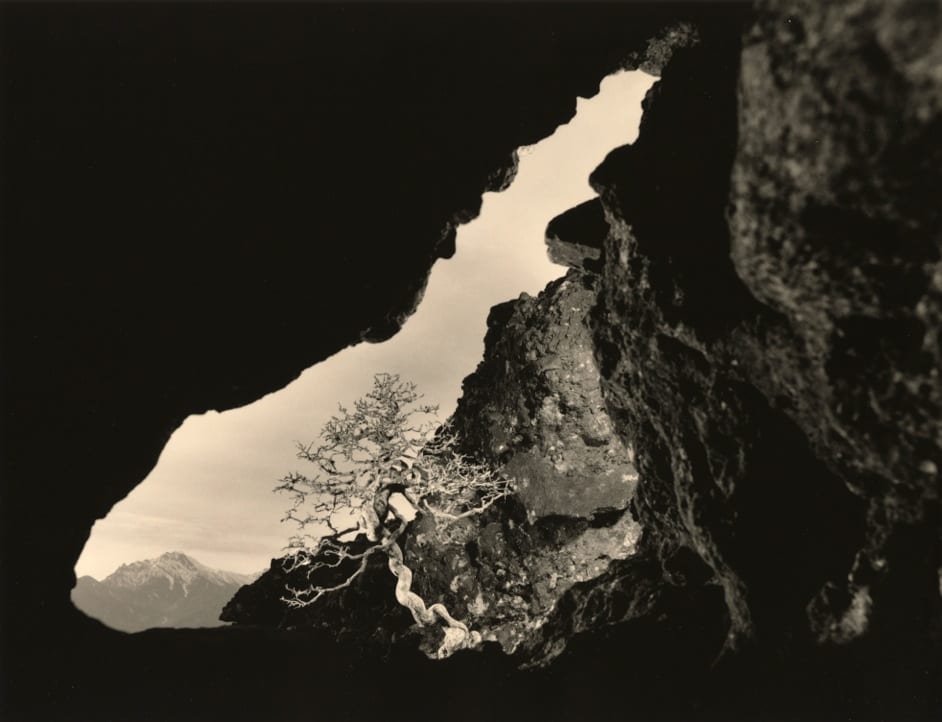 Bonsai are emblematic of Japan, and Yamamoto leans into this aspect. One image frames Mount Fuji between pine tree limbs. Another puts a tree on the right, with the horizontal blade of a sword projecting from the left edge of the photograph. Are the tree and the sword dueling, or are these twin images of Japanese-ness presented directly, without ironic intention?

The artist relates this simplicity to another distinctly Japanese art form: haiku. These brief poems state everyday things in simple turns, the simplicity of a slap of cool water awakening a sharper perception. The artist says that the purpose of bonsai “can be perceived as one of metaphysical ideology.” Of this body of work, he says, “I want everyone to view and experience this minimal yet maximum effect, or in other words, infinity.”

One might point to a kind of “Orientalism” in these patently Japanese images, the silk mattes, the simplicity that reveals greater depths. (Yamamoto’s works, by the way, are almost exclusively in Western collections.) Isn’t all art made for the art world a variation on “Orientalism”? Images in art galleries are made precisely on the ideology of their magical creation, of the oracular or visionary process by which the artist delivers them, of the categorical “otherness” of the artist from the viewer. Yamamoto is playful with the idea: The dramatic lighting effects employed in some images are too overt to be seen as trickery. Instead, they pull back the curtain a bit on the photographer’s process. Viewers are thus given the choice to be complicit, or not.

Yamamoto cites the importance of Buddhism to his work, and so a series of haiku-like bonsai photographs is a natural progression. Both haiku and bonsai are influenced by Japanese Buddhism. The cycling of a tree that returns in images to a tree, and in fact being a tree, reminds one of the progress of a Zen monk. At first, mountains are mountains; next, mountains are no longer mountains; finally, mountains are again mountains.