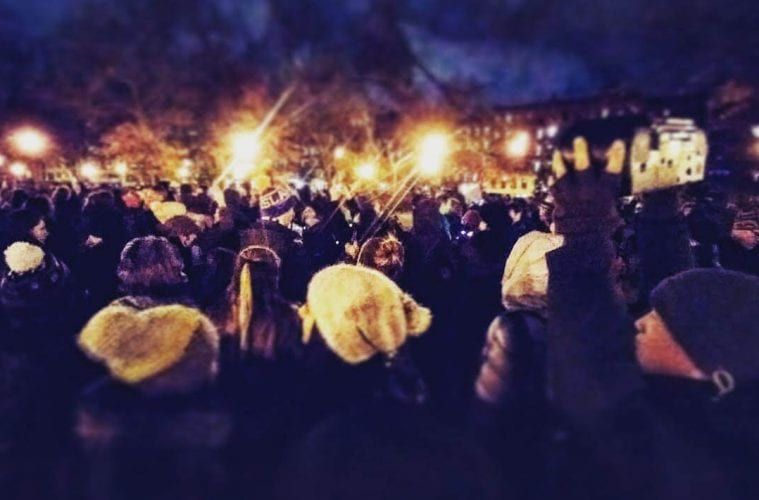 Atlanta is a city replete with annual holiday season traditions, including musical ones. Some are still well-remembered but long gone, like the gathering of community choruses that would sing for the lighting of the Great Tree on the over-street pedestrian bridge of the former downtown Rich’s department store. Others are still going strong, such as the “Christmas with the ASO” concerts at Symphony Hall, featuring the Atlanta Symphony Orchestra and Chorus and their guests.

Another holiday event which has become tradition elsewhere, but could also become one in Atlanta, is Phil Kline’s “Unsilent Night” — a nonreligious but joyous audio anarchy, a kind of here-comes-everybody musical celebration of the spirit of the season in which anyone can participate.

The best way to get the gist across to Atlantans is by comparison with a familiar local event: the several lantern parades that take place in the metro area each year. Imagine one where, instead of lights, the participants carry audio, played on boom boxes or other portable audio devices. Copies of four different stereo audio tracks are distributed among the crowd of participants, one per device.

This Sunday evening, December 10, contemporary music ensemble Bent Frequency, a champion of the avant-garde in Atlanta, in partnership with Flux Projects and Priscilla Smith Productions, will mount a performance of Phil Kline’s “Unsilent Night” that will stroll through part of Atlanta’s historic West End community.

The performance-parade will begin and end at Garage — Monday Night Brewing’s new barrel-aging and souring facility located on the BeltLine in West End at 1003 White Street.

Gathering of participants will take place from 5:30 to 6 p.m., and the performance-parade will begin at 6:30, taking a looping route through the neighborhood that ultimately winds its way back to Garage. It will last about 45 minutes, the total length of the composition.

Also, if you’re going digital, participants are asked to predownload the tracks to your device in advance.

“Unsilent Night” is a free event, open to anyone, no musical background required to take part. What’s essential is a critical mass: more participants, more merriment — and, of course, louder. Families are welcome. Some participants in New York City have grown up parading in “Unsilent Night” as an annual tradition since their childhood. This year, “Unsilent Night” celebrates its 25th anniversary.

It all began in the winter of 1992, when Kline envisioned a public artwork in the form of a holiday caroling party, composing a four-track electronic piece for boom boxes that was the length of one side of a 90-minute cassette tape. He and some friends gathered in Greenwich Village, each wielding a boom box with one of four tapes in it. To begin, everyone hit “play” at the same time then walked a predetermined route, creating a mobile sound-sculpture that filled the air, reverberating off buildings and streets with its evanescence. “In effect, we became a city-block-long stereo system,” recalls Kline.

The event was so popular that it became an annual cult tradition in New York City, then an international phenomenon that has been celebrated in over a hundred locations worldwide. This year, some 37 performances are taking place between December 1 and 23. Today, “Unsilent Night” is considered an established landmark in avant-garde public art. The Village Voice called it a “magical bond connecting public space to listening public.”

This is not the first time Bent Frequency has performed “Unsilent Night” in Atlanta, but it has been a long hiatus since they did. That first time was in 2003, the group’s debut year. With this year’s performance, the group’s co-artistic directors Jan Baker and Stuart Gerber hope to make it into a new annual tradition for Atlanta.

“We had wanted to produce ‘Unsilent Night’ many times since the 2003 Atlanta premiere, but this time of year is often tricky, especially for freelance musicians with holiday gigs,” says Gerber. “The participants are the performers, and it has the potential to have a real community feeling, like holiday caroling, but with electronic music. This time we chose West End both because Southwest Atlanta [is a] vibrant community where a lot of artists and activists live, plus it’s residential. It’s going to be very different from when we did it [Downtown] in 2003.”

Indeed, no two presentations of “Unsilent Night” are alike. Each city or neighborhood imprints its own character on “Unsilent Night” — in Austin, Texas, for example, it’s done on bicycles. Some are intimate, others vast in scope. What character Atlanta might impart to it over time is yet to be seen, of course, but one could easily speculate that the metro area’s quartet of lantern parades might impart some influence, especially if some of the same people who participate in those choose to take part in “Unsilent Night.” In the end, only time and emerging traditions will tell.