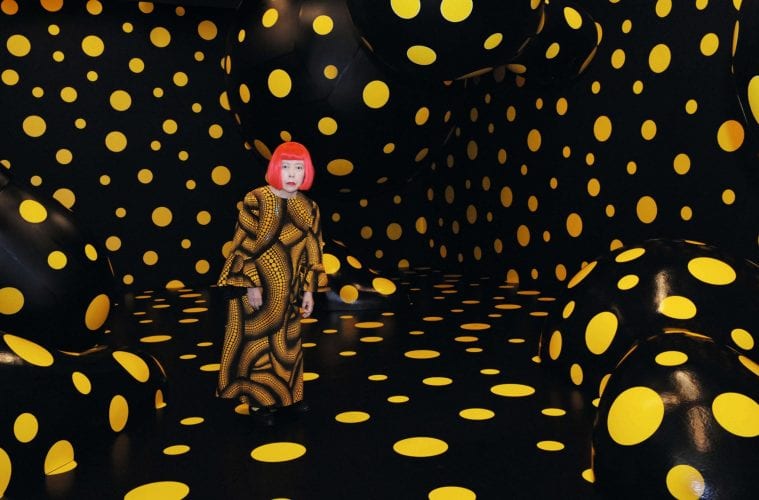 If you’re making a list, there’s no need to check it twice. Here’s what we want this year: big, beautiful art books.

We certainly hope we’re at the top of your gift-giving list this season (our name starts with “A” after all), but even if we’re not, we know these picks will be absolutely perfect for any Atlanta art lover you’re shopping for as the holidays approach. YAYOI KUSAMA. By Akira Tatehata, Laura Hoptman, Udo Kultermann and Catherine Taft (Phaidon, $69.95)
Before someone comes to visit, it’s nice to get to know a little bit about them. There are few better ways to get to know Japanese artist Yayoi Kusama — whose work will be exhibited at the High Museum in November of 2018 — than in this updated edition of the 2000 monograph from Phaidon. The book had something of a retrospective quality when it was originally published, tracing the path of Kusama’s paintings and participatory installations from their beginnings back in the 1960s, but Kusama’s selfie-friendly Infinity Mirror Rooms has brought her a blast of renewed late-career fame that exploded after the book’s publication (Time Magazine recently named her as one of the World’s 100 Most Influential People, and The Art Newspaper named her the world’s most popular artist in 2014). Expect long lines and a circus of selfie-sticks at the show in November, but before that happens, spend some quiet time with the incisive interviews, thoughtful essays and colorful images that explore the long and surprisingly varied career of one of the world’s most fascinating artists.

OBAMA: An Intimate Portrait. By Pete Souza (Little, Brown & Company, $50)
When the present becomes too much to bear, it’s nice to know you can escape into the past. The past certainly has a dignified and lovely patina in photographer Pete Souza’s recent book, which culls from the more than two million images he created as chief official White House photographer and director of the White House photo office during President Barack Obama’s administration. ArtsATL critic Gail O’Neill interviewed Souza in advance of his visit to the Jimmy Carter Presidential Library in October, revealing the practicalities and challenges of the demanding position. “I think they all stick to me,” he told ArtsATL about his images. “They’re part of my life and who I am. Who I will be — in the future, as a photographer — is based on experiences that I’ve had.” In many ways, these images have become a part of us, too. WILD HORSES OF CUMBERLAND ISLAND. By Anouk Krantz (Images Publishing, $75)
French-born, Connecticut-based photographer Anouk Krantz spent 10 years visiting Georgia’s Cumberland Island, journeying to the island’s most isolated spots to capture stunning images of its wild horses, the only unmanaged herd on the east coast. By venturing out alone and practicing near total stillness, she found that some of the curious horses would approach her, and she was able to get unbelievably intimate shots of the animals in their natural environment. As ArtsATL editor Scott Freeman explored in his recent interview with Cumberland naturalist Carol Ruckdeschel, some environmentalists have argued that the horses are bad for the island and that the island is bad for the horses. Discussions have even turned to the possibility of humanely removing the population. If the horses are ever removed (for better or worse, the possibility seems to be off the table for now), the beautiful photos will make the memory of their presence on Cumberland all the more touching. PRINCE: A Private View. By Afshin Shahidi (St. Martin’s Press, $35)
Speaking of photographers who capture images of elusive, enigmatic creatures, Prince’s longtime personal photographer has just released a book of images taken between 2001 and 2010. More than 100 of them have never been published before. Especially fun are the images of the wild, music- and dance-filled celebrity parties Prince threw when in Los Angeles, attended by the likes of Dustin Hoffman, Joni Mitchell, Kanye West and Spike Lee. Somewhat disappointingly, the bulk of the photos are posed publicity-style shots or concert images (just ones we haven’t seen before), but the occasional rare candid shots capture more interesting moments of quiet isolation. They reveal contemplative, melancholy and playful sides that deepen, rather than resolve, the mysterious aura that surrounded the little purple prince.

DRAWINGS. By Shara Hughes (Rachel Uffner Gallery, $45)
Atlanta native, now Brooklyn-based artist Shara Hughes’ career has shot into the stratosphere the past couple years, and flipping through the appealing plates in this new book of drawings makes it easy to understand why. The catalog comprises 69 works on paper, dating from 2014 to 2017, sequenced by the artist, offering a chance to experience her lush, joyful work. No pressure or anything, but the book is limited to a run of 500 copies, so if you plan to get us one, best to hurry. ALL ABOUT YVES. By Catherine Örmen (Laurence King, $50)
Fashion is certainly a lively topic, so what is it about fashion books that can make so many of them seem so dull and lifeless? What we love about Catherine Örmen’s new book about iconic designer Yves Saint Laurent extends well beyond its kicky title to its equally jaunty and inventive approach. Full of gatefolds, pasted-in pages and colorful inserts housed in cellophane envelopes, the book evokes the feeling of digging through a scrapbook or exploring a stack of memorabilia left in an attic. Sure, a knowledgeable fashion writer discoursing on Saint Laurent’s innovative trouser suit can give you insight into the designer’s way of thinking, but so can holding replicas of the paper dolls Saint Laurent created as a child growing up in French Algeria. They’re exquisite, as are the little outfits he made for them in gouache and colored ink, also recreated here. There’s even a copy of the program that little Yves made for the fashion shows he had his dolls put on for his sisters. Clearly, even as a kid, he was singular, driven, intense. THE SOUTHERN FOODWAYS ALLIANCE GUIDE TO COCKTAILS. By Sara Camp Milam and Jerry Slater (University of Georgia Press, $29.95)
The South has always had a complicated relationship to alcohol. On the one hand, the strictly traditional, deeply religious culture has often proscribed excessive drinking, but then, on the other hand, you definitely need to drink a lot in order to live here. Authors Jerry Slater and Sara Camp Milam consider the culture and history of drinking in the South, from bootleggers and bourbon barrels to Tennessee Williams and the Pimm’s cup. But even better: they offer numerous recipes for such indelible Southern classics as the Sazerac, the Vieux Carré and the Old-Fashioned alongside some inventive concoctions from the New South’s most innovative mixologists. It’s a book that will help ensure that this Christmas is a merry and bright one. (The authors speak about their new book on December 13 at 7 p.m. at the Atlanta History Center, so there’s even the opportunity to get a gift copy signed before the holidays.)

THE ULTIMATE PASTA AND NOODLE COOKBOOK. By Serena Cosmo (Cider Mill Press, $39.95)
You should never drink on an empty stomach, so we figure it’s best to give the book above alongside Serena Cosmo’s new take on pasta. (It’s the most polite way of saying, “As long as you’re pouring me a drink, you might as well make me a dish of butternut squash-filled cappellacci while you’re at it.”) Fortunately, Cosmo knows her stuff; she focuses on pasta from Italy, which would be enough to fill any book, but the impressively comprehensive guide also covers Eastern European pierogies, Chinese noodles, Korean dumplings and Greek trahana. She tells you how to roll your own, and she also has some sage advice about contentious topics surrounding pasta, like what exactly constitutes al dente and which shapes are appropriate to serve with which kinds of sauce. Her own luscious photographs accompanying the text make it easy to pick out what you want, but try to avoid the temptation of circling certain recipes before you give the book as a gift to someone else. VIVIAN MAIER: A Photographer’s Life and Afterlife. By Pamela Bannos (University of Chicago Press, $35) and AVEDON: Something Personal. By Norma Stevens and Steven M.L. Aronson (Spiegel & Grau, $40)
Sometimes the person behind the lens is every bit as intriguing as the subject in front of it, and such is the case for two very different but equally fascinating 20th-century photographers: Vivian Maier and Richard Avedon, both of whom are the subjects of new biographies. Norma Stevens was Avedon’s studio director and collaborator for three decades, and with writer Steven M.L. Aronson, she attempts to get at the man behind the camera, including oral history-style reminiscences from the likes of Calvin Klein, Naomi Campbell, Bruce Weber and Mikhail Baryshnikov. At the opposite end of the spectrum, Pamela Bannos attempts to unravel some of the mystery behind photographer Vivian Maier, who remained completely anonymous as an artist during her own lifetime. Maier, the author argues, was not the eccentrically reclusive, idiosyncratic nanny we may have initially imagined, but a serious photographer who simply supported her unusual practice in that line of work. Both biographies offer multifaceted, thoughtful portraits of photographers we thought we knew, and both books try to get at something Avedon himself stated so beautifully and succinctly: “The best portrait is always the truth.”