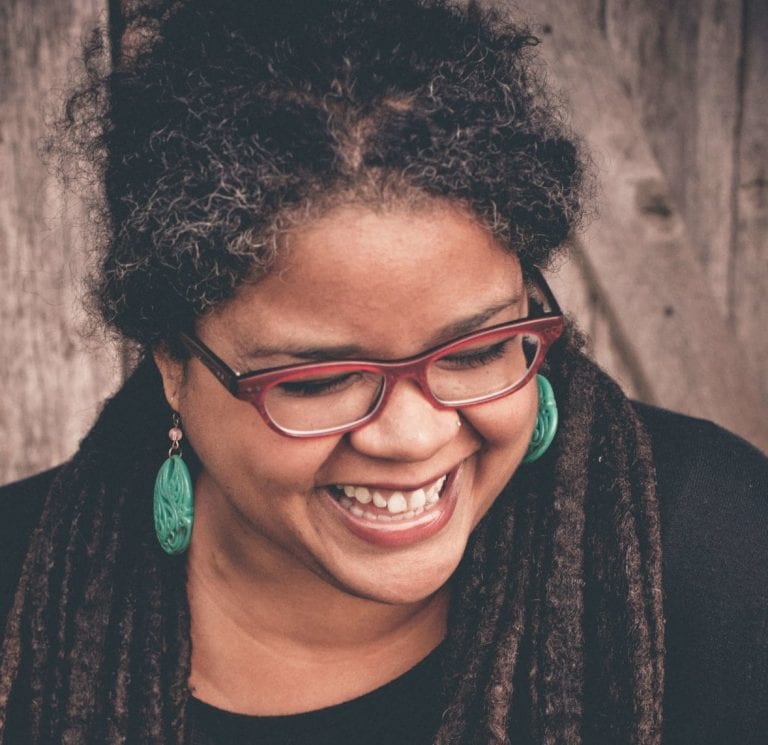 Navigating unfamiliar terrain can be tricky, especially when it comes to matters of the heart. But imagine being the recently widowed mother of a six-month-old baby boy who turns to her brother-in-law for comfort, only to feel the stirrings of romantic love breach the boundaries of what had been a strictly platonic relationship.

Leesa Cross-Smith’s debut novel, Whiskey & Ribbons, explores these themes from three points of view: that of Evangeline (Evi), who is nine months pregnant when the sudden death of her husband leaves her feeling “stained with grief. Like I have a permanent watermark. Like if you say the right thing or wrong thing or hold me up in the perfect light, you’ll be able to see it”; her husband Eamon, a man as giddy at the prospect of becoming a new father as he is daunted, before being murdered in the line of duty as a police officer; and his best friend and adopted brother Dalton, a guardian at heart whom Evi calls “my Huckleberry friend.”

What are the limits when it comes to love? When is it OK to stop grieving and start living? And who gets to decide? Cross-Smith proffers no pat answers to any of these questions. Instead, she offers three intertwining voices that will leave readers more eager to listen than judge. In advance of her multi-day book tour in Atlanta, Cross-Smith rang ArtsATL from her home in Louisville, Kentucky, to talk about the romance of snowstorms and shelters, her obsession with intimacy and the importance of giving mama a break. 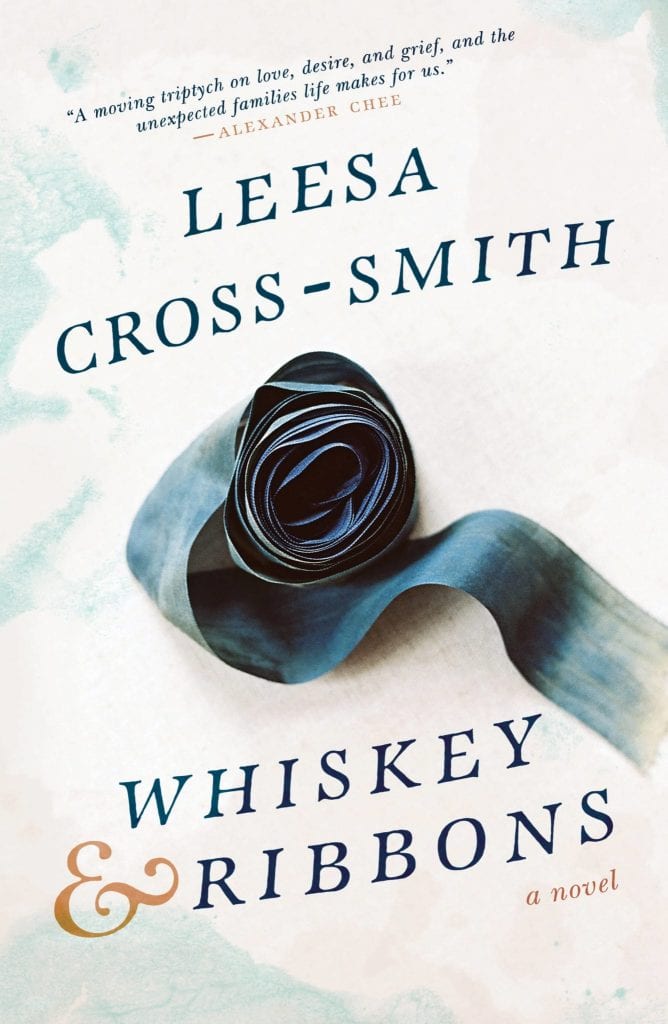 ArtsATL: Music plays a pivotal role throughout Whiskey & Ribbons, from the fugue-like story structure to evoking emotion and memory. Are you a synesthete?

Leesa Cross-Smith: That’s an interesting question. On a lot of levels, I think I am. Maybe not so much with color, like a traditional synesthete, but I think my senses get a little mixed up, especially when I’m creating and allowing myself to spill out. Some of it comes naturally; some of it I can force myself to do if I sit with it long enough. I wanted the book to feel like music — like a piece played on the piano, like music from a ballet with recurring themes throughout. The only way I could finish writing this book was by twisting it with music, allowing music and words to become one, to make sure the story was infused with all kinds of specifics the reader could hear and taste and see and feel.

ArtsATL: Much of the book’s action takes place during a snowstorm, with weather that mirrors the frozen, dormant, colorless emotional state of your protagonists. Was this your intention?

Cross-Smith: Yes. I wanted the setting to be a stark contrast to the sultry, summer morning when Eamon was killed [six months prior in July]. I wanted the reader to know immediately that everything is different, that everything has changed. I just loved the idea that Evi and Dalton really can’t escape. They’ve had some time to process this [trauma] and are forced inside. And I just think it’s cozy and romantic to be snowed in together!

ArtsATL: Evi and Dalton are forced to explore what it means to build and sustain a family while the most foundational parts keep moving. Did their actions or choices ever surprise you, give you pause or trigger judgment?

Cross-Smith: I’m proud of Dalton, who carries the emotional weight of the book, because he would never prey upon Evi’s vulnerability. But I was really proud of her for just going for it and kissing him without being disrespectful to [her late husband’s] Eamon’s memory in any way. The whole thing is pretty weird, but I feel like I managed to infuse [multiple components] to create well-rounded characters who felt alive on the page.

ArtsATL: How long did you work on the book?

Cross-Smith: I got the seeds of the idea for it back in 2000, but put it away for years and years until writing the short story [published in a collection of short stories titled Every Kiss a War] in 2011. A couple years ago I decided to make it longer.

ArtsATL: What planted the seed?

Cross-Smith: I wanted to write a story, play or screenplay about a woman and two men where something happens to one of the men — after which she would be snowed in with the other man. I didn’t have a lot of really concrete ideas about it, but once it came to me, I just started jotting down a lot of random things.

ArtsATL: Your book and Tayari Jones’ An American Marriage mine much of the same emotional territory. As a writer, are you excited to be a part of a zeitgeist? Or is it weird to have your work aligned so closely with that of another novelist?

Cross-Smith: Our release dates were exactly one month apart, but I had no idea what Tayari’s book was about. When I finally read the synopsis, I was like weird! Now her book is this huge, huge thing. It’s an Oprah’s Book Pick, which makes life really fun for me, not only because Tayari is this amazing, generous woman who is so kind and really reaches out to help other writers, but because when her book comes up in conversation, the response has been, “Oh, you should also try Whiskey & Ribbons.” It’s been an awesome, dream come true. I’ll take any comparisons to her as a writer. Gladly.

ArtsATL: The story is told from three points of view: Evangeline’s, Eamon’s and Dalton’s. Why did you choose to offer multiple narratives? The complexity must have made your life so difficult.

Cross-Smith: It did! It took me years to figure out how to give readers three completely fresh, new perspectives from each main character. Originally, I was going to tell it from Evangeline’s point of view, but found myself really wanting to write Eamon’s side, although it broke my heart, before he was killed. Once I put him in there, I had to add Dalton’s voice. It made my life incredibly difficult. I would go on long walks and spent so much time thinking about it. I even wrote three books [just to] avoid digging in and trying to figure out how to structure the narrative.

ArtsATL: Nicknames can tell us a lot about the named and the namer. Can you share your thoughts on these terms of endearment, and why they are bestowed so frequently between your characters?

Cross-Smith: It’s really important to me to create intimacy between characters in my writing, so I spend a lot of time making sure they have little, sweet nicknames for each other, something no one else would call them. I’m sort of obsessed with intimacy in general, but especially in movies and books; those teeny, tiny moments are my favorite things to write, and nicknames really help. I’m also intrigued by the release that happens when a couple is arguing and one calls the other by their nickname. It lets the air out, no matter how tense, and is a sign that everything’s OK.

ArtsATL: Eamon’s name means “guardian,” and protection is a theme that runs throughout the book. Why did the idea of people protecting one another interest you as a writer?

Cross-Smith: After I put Evangeline in such a horrifying situation, I asked myself what I could do as a writer to make sure that she’d be taken care of. I wove elements like wool socks, warm sweaters and hot chocolate into the story to signal to the reader that she is protected. As for Eamon, the name was on a short list for our son back when I was pregnant. At the time, I had no idea that it meant guardian. That was just a happy accident!

ArtsATL: Would you like to tell readers what the title means? Or would you rather it be a surprise?

Cross-Smith: Originally, I thought of “whiskey” in terms of being men, “ribbons” being women. It was about love and relationships, and I just liked the words together. But after a friend suggested that I could put the words in Eamon’s mouth, as part of a toast, I thought it was a really sweet idea.

ArtsATL: Did writing this book reinforce or challenge your thinking about how much time should pass between losing a loved one and allowing our hearts to “unlatch,” as you put it in one passage, to the possibility of finding romantic love again?

Cross-Smith: Hmmmm. I knew that would be a question and a conversation starter for many readers. I chose to make it six months because it was both an amazingly short amount of time, but time enough for Evi to come to the realization that Eamon’s not coming back. By the same token, six months is a tight enough time for you to be like, Whoa! That’s kind of too soon. Whether the reader wants to [pass judgment or not] is strictly up to them. I’ll never forget when my mom went to a grief therapy session after her mother passed away several years ago, and said she was blown away when the therapist told her that there’s no right or wrong way to grieve. I think people know that instinctively, but being granted permission [by someone else] can really free up your spirit and soul.

ArtsATL: Evi is a new mother when we first meet her, but you focus on her personhood as opposed to her being the alpha and omega to her son Noah. What was the thinking behind your choice?

Cross-Smith: The one thing I didn’t realize until becoming a mama was how often I’d have to remind my babies that I am a person too. In a way, children are not equipped to handle that. [In their minds,] a mommy just works for me. I’m not a real person. I’m just a mommy robot who doesn’t have to sleep, or eat, or take a shower. Ever. My babies are 14 and 11 now, and we still have those issues from time to time [laughs], so it was really important to me to give Evi a break. Her special weekend with Dalton marks a turning point. I let Noah spend that weekend with his grandparents just so mama could drink whiskey, smoke a cigarette and think for a second. She is a person, completely separate from her role in her son’s life — the same way I am, and every other woman is who happens to be a mother.

ArtsATL: There tend to be two camps of thoughts when it comes to family secrets: a) Honesty is the best policy, and b) What I don’t know won’t hurt me. As your characters were forced to navigate a whopper of a family secret, did you find yourself wavering on the most prudent course of action?

Cross-Smith: That’s a really good question. Perhaps there are some things which, if you die without knowing, it would be better than the stress of having to deal with an uncomfortable truth. On the other hand, isn’t it always better to get everything out on the table? I feel like it’s both — it really depends. Hopefully, I do justice to considering all sides of the equation.

Leesa Cross-Smith will talk about her debut novel Whiskey & Ribbons with Jessica Handler at A Cappella Books’ Writers @ The Wrecking Bar on March 20 at 7 p.m.

(Correction: The previous headline for this story incorrectly claimed Leesa Cross-Smith to be an Atlanta author. She is actually from Kentucky.)