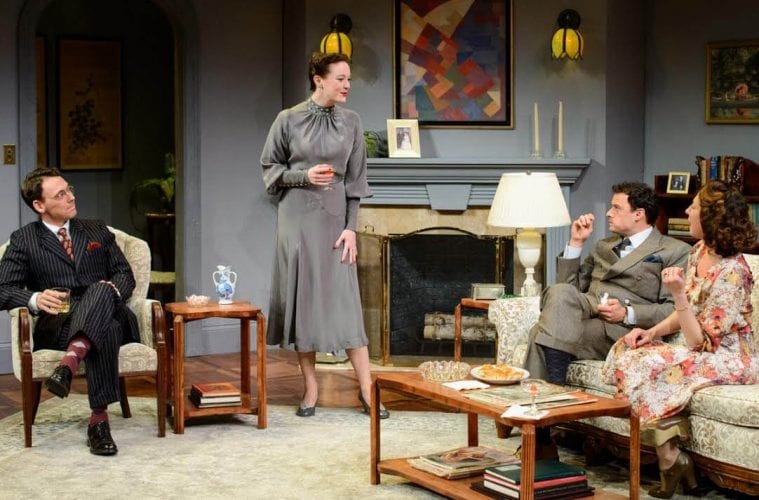 If you could save a stranger’s child by risking your own safety and security, would you?

The moral intricacies and personal strain that an American Jewish couple face as they try to save not just one but 50 children from the impending disaster of the Holocaust are the compelling topics of Alix Sobler’s new play Sheltered, which is currently having its world premiere at Actor’s Express as part of the Alliance Theatre’s on-the-road season through March 25. The play is the winner of this year’s prestigious Kendeda National Graduate Playwriting Competition, an annual contest that selects the best play written by a student in a graduate writing program for full production at the Alliance.

The play opens on what seems to be a pretty ordinary domestic scene of the period. Leonard (John Skelley) and Evelyn Kirsch (Amanda Drinkall) welcome old friends Martin (Lee Osorio) and Roberta Bloom (Park Krausen) into their home for what seems to be a friendly evening of cocktails and conversation. But even from the opening lines, the surface ripples with underlying tensions: there’s a war in Europe, the Blooms and Kirsches are assimilating American Jews, and their status, though comfortable, is nonetheless somewhat uncertain and unfixed, and Martin and Roberta face some pretty serious domestic issues, his violence and her dysfunctional denial fueled by her desire for a perfect home.

Evelyn does her best to keep the conversation light and fun, which we soon see is a nearly impossible task — the world outside, and the one within, are not particularly kicky or fun in 1939. What’s more, we gradually learn that Leonard and Evelyn have ulterior motives behind the gathering. They’ve hatched a wild plan to go to Europe to try to bring back 50 children to adopt into American homes in order to save them from the Nazis. Convincing their friends to adopt one of the children, they discover, may be one of the most challenging goals of a wildly quixotic plan.

For the most part, the two acts of Sheltered proceed at the pace of a good thriller, though the opening act’s long cocktail party begins to drag in spots. I found myself longing for new characters and new developments. Still, Sobler knows her subject, both in the sense of her historical research and in her ability to imagine historical realities. There were many nice moments, but I was especially interested to hear Roberta try to temper a dire political picture painted by her friend Evelyn by saying, “This isn’t medieval Spain,” when what a person might say nowadays in a similar situation is “This isn’t Nazi Germany.” It was a small moment, but it struck me as a particularly insightful, and probably accurate, imagined historical particular.

Sobler’s subject is undeniably weighty and worthy, and it’s handled well, but does Sheltered make a good play in the end? They’re separate questions, in my opinion, and I’d answer the second with a qualified yes. The structure of Sobler’s play is pretty airtight, and the dramatic developments are nicely deployed, so much so that there can begin to seem something old-fashioned about the play. The play’s time period is 1939, and with its drawing room settings, its talky dialogue, its domestic situations with tense undercurrents and its measured, nicely symmetrical two acts, the play itself can literally seem like an artifact of that time, which is both praise and criticism.

Playwrights certainly knew how to craft a play back in the day, and Sheltered’s two-act structure is well-crafted in that sense, but in a way that makes it seem like a throwback. Its subject and perspective are modern, but the tone, the characters, the method would not have looked out of place on Broadway in 1939. As with an old play, a modern viewer can begin to feel as if the issues, ideas and emotions are being marched out and displayed in organized ranks; once it’s certain they’ve been examined top and bottom, they exit stage left, and the next is marched on.

The method is expert and time-tested, but not organic or contemporary. A final conversation between two mothers from different continents and from different social, cultural situations who nonetheless recognize a common bond — followed by a heftily symbolic conversation about the rain outside — were so old-fashioned, I could imagine them as filmed by Frank Capra or Douglas Sirk, placed in glowing lighting, captured in soft black-and-white and set to the strain of violins.

Still, Sobler dives headfirst into a compelling and important historical moment, believably laying out the stresses faced by imperfect characters who decide to do a perfectly heroic and noble thing. The cast is excellent across the board, and I especially admired Jack Magaw’s set design, which is placed on a diagonal in the adaptable blackbox space at Actor’s Express, an unusual setup which is then effectively and inventively used by director Kimberly Senior in the placement and movement of the characters.

Ultimately, in spite of its old-fashioned strategies, this look back into history at people stepping outside the bubble of comfortable, sheltered lives to take action in a political world grown suddenly hostile and ugly resonates with a sense of undeniable timeliness.