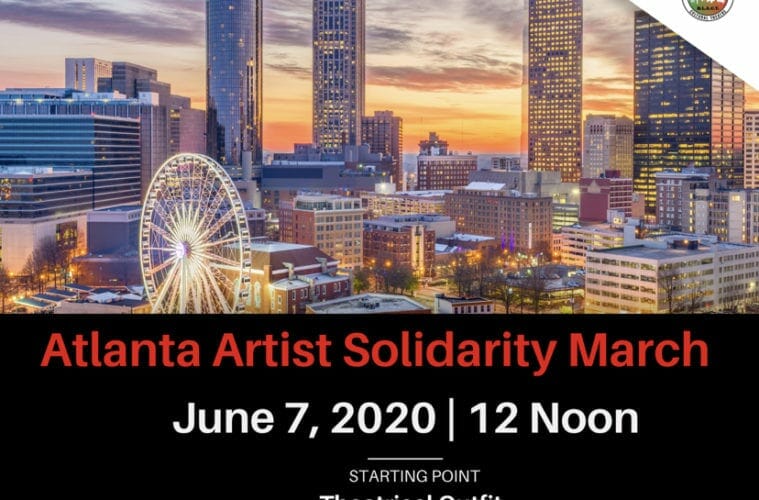 Atlanta theater artists plan to march Sunday afternoon (June 7) in solidarity with those who have been protesting peacefully since the May 25 killing of George Floyd in Minneapolis and the deaths of Ahmaud Arbery (Brunswick, Georgia), Breonna Taylor (Louisville, Kentucky) and others across the nation before him. They’re calling it the Atlanta Artist Solidarity March.

Marchers are being asked to wear red so that members of the group can be easily indentified. The march begins at noon and will start with a short program outside Theatrical Outfit, on Luckie Street downtown. The marchers will walk to Centennial Olympic Park and then return to Theatrical Outfit. “We want to keep it as safe as possible. That’s why we’re doing it midday,” says Brittani Minnieweather, who’s helping organize the event with colleagues Tina Fears and Marcus Hopkins-Turner.

All are part of the group called B.L.A.C.T., an acronym for Black Leaders Advocating for Cultural Theater. The organization, which has more than 270 members, was founded in March 2019.

Organizers offered this statement: “The mission of the Atlanta Artist Solidarity March is to bring awareness to the unjust treatment of black people in this country and bring attention to the many injustices experienced by black artists in Atlanta. Standing side by side with our arts leaders, fellow artists and our community as a whole, we strive to evoke change. At a time when our country is crippled by the fallout of tragedy, our goal is to unify our arts community through forward thinking, courageous leadership and collaboration. We aim to create an artistic work environment for today’s black theater artist that is safe, nurturing and an accurate representation of our community.”

Dad’s Garage Theatre Company, at 569 Ezzard St., has offered parking to marchers and the Atlanta Film Society will have a shuttle to bring people back and forth. Additional support is being provided by 7 Stages and others. A livestream will be offered for anyone who can’t march in person for health or other reasons but wants to “march virtually.” Look for the stream on Instagram at @blactatl and @theatricaloutfit. Dad’s Garage and Serenbe Playhouse plan to stream it on Facebook.

When they began organizing the march, Minnieweather says they thought they’d do well by attracting 50 people. It has grown, though, and now some 200 marchers are expected.

“How do we express ourselves as artists?” she asks. “We raise our voices as theaters and individuals. This is an issue I think we can all get behind.”