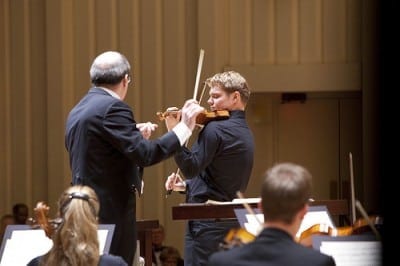 There’s a paradox to an orchestral musician’s career, and mind-set. Music thrives on individuality, demanding that musicians express something unique to their inner expressive voice. Yet, in an orchestra, individuals must take a largely anonymous role within the massed forces. Occasionally, happily, principal players are afforded an opportunity to step out front, their voices heard as soloists.

Atlanta Symphony Orchestra concertmaster David Coucheron and principal cellist Christopher Rex are featured this week, November 10, 12 and 13, in Brahms’ Double Concerto. It was Brahms’ last orchestral work, and what it lacks in simple flash it makes up for in demand. It requires a pair of matched soloists who must play together almost as if a single instrument. With celebrated composer-conductor Oliver Knussen on the podium, the Brahms concerto will find itself in the amiable company of Benjamin Britten’s “The Young Person’s Guide to the Orchestra” and his “The Building of the House” Overture, plus Knussen’s own “Symphony in One Movement.”

The following week, on November 17 and 19, ASO principal flute Christina Smith will be featured in Mozart’s Flute Concerto No. 1. A trustworthy piece that plays a central role in flute repertoire, the 26-minute concerto will be strongly contrasted with two intriguing but rarely performed American works, “Angels” by Carl Ruggles and “Andante for Strings” by Ruth Crawford Seeger. The popular Symphony No. 2 of Jean Sibelius will finish the evening, all led by another guest conductor, Ilan Volkov. For tickets to these concerts, click here.

Of these three principal-chair musicians, Rex is the longest-tenured with the ASO, having joined in 1979. Smith became principal flute in 1991, at the astonishing age of 20. Coucheron, the most recent addition to the team, settled in as concertmaster in September 2010.

Having soloists in an orchestral concert is an essentially unquestioned convention. The common wisdom is that orchestral programs need the vivifying element of solo repertoire and star-personality guests performing it, both for musical and marketing reasons. But bringing the orchestra’s principals to the fore for prominent solos is also good musical judgment. They both enliven the season and contribute to the vibrancy of the city’s arts community. It helps to break down the invisible walls between performers on the stage and audience in the seats. Fans of a major league baseball team such as the Atlanta Braves know names and positions of individual players and are keenly aware of their capabilities as athletes. Ought not the same to be true of a major symphony orchestra and its relationship to its audience?

And if the best music is indeed made by a confederation of talented individuals, how better to demonstrate that than to draw upon the ensemble for featured soloists? It is hardly a parochial notion. Rather, it helps validate Atlanta as a place where creativity originates and flourishes.