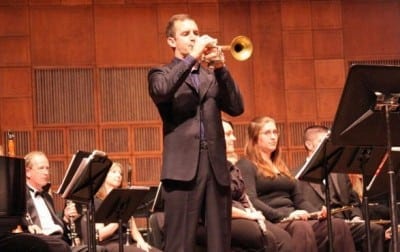 Last month, a pair of ambitious and hyper-talented Atlanta Symphony musicians vowed to buck convention. Although they could confidently win prestigious jobs in top orchestras, they decided to quit taking auditions in other cities and remain in Atlanta.

The couple had their own reasons for making these life, career and orchestra-enhancing decisions — detailed here — but the overall effect was to build up the ensemble they already called home. As principal oboist Elizabeth Koch said after she decided to stay in the ASO, “Now we just have to convince others in the orchestra not to leave!”

ASO Music Director Robert Spano tried a different approach to the same problem. Two months ago, the conductor and the ASO’s administration gave principal trumpet player Thomas Hooten the first-ever Mabel Dorn Reeder Chair, a merit-based award that came with a no-strings-attached $10,000. We reported the news here. The Reeder prize was a clear indication that Spano wanted Hooten to stay put. Couldn’t he feel the love?

Nevertheless, Hooten’s personal ambitions meant he was still looking for a better gig, and he continued taking auditions with other orchestras. Over the weekend, he was told that he’d won the Los Angeles Philharmonic’s principal trumpet job. Now it’s up to L.A. Music Director Gustavo Dudamel to cast the deciding vote.

Over the past dozen years, Los Angeles has been on the fastest ascent of all American orchestras. It now rivals, or surpasses, some of the historical “big five” in artistry, energy and budget. The most celebrated graduate of Venezuela’s transformative El Sistema music education program, Dudamel is a young maestro of charismatic and fiery interpretations.

The money’s good, too. The L.A. Philharmonic’s annual budget is about $90 million; the ASO’s is $46 million. The starting musicians’ salary in Los Angeles, for the 2011-12 season, will be $143,260; in Atlanta it will be $81,640. (And principal players typically earn much more.) Walt Disney Concert Hall is a stainless-steel beacon of architectural glamour and great acoustics. Atlanta’s Symphony Hall? Somewhat lower in quality.

In an email message this morning, Hooten wrote: “At this point the way the process works is that the audition committee has voted that I’m ‘qualified’ and now it is in Dudamel’s hands. I will go play a couple weeks in the fall and we will move forward from there. I basically did the same thing here in ATL.”

In other words, while his departure is practically certain, the contracts have not been signed. There are many moving parts. Union contracts stipulate that a player with the orchestral equivalent of tenure can audition and spend a year with another orchestra as a trial, and return if he or she isn’t awarded tenure in the new ensemble. According to Hooten, the L.A. Philharmonic’s current principal trumpet, Donald Green, is on sabbatical for the 2011-12 season and will retire next summer, meaning that even if he gets the nod from Dudamel, he wouldn’t formally start until the fall of 2012.

“I don’t want anyone to think that I don’t love the ASO,” Hooten said in a follow-up phone conversation. “If this [L.A.] thing did not work out for me, I was prepared to settle in Atlanta and be happy for the rest of my career.”

Still, for the ASO to realize the potential that everyone suspects is lurking on the stage of Symphony Hall — to become the Deep South’s L.A. Philharmonic, in other words — the best young musicians in the country will need to see Atlanta as a destination, not just a stepping stone. We’re not quite there yet.