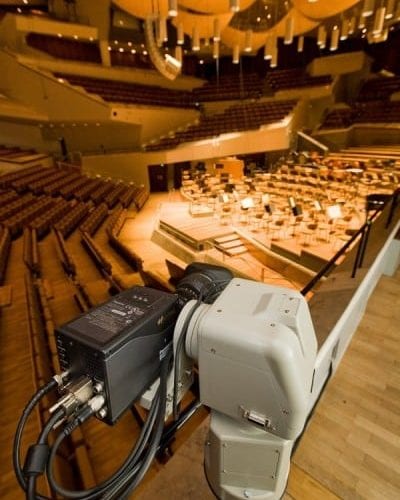 I’m hooked on the Berliner Philharmoniker Digital Concert Hall, a high-definition audio and video pay-per-view Web site. A few days ago, I got a 30-day pass, just in time to catch the Atlanta Symphony Chorus sing with the Berlin Phil in Brahms’ “Ein deutsches Requiem,” conducted by Donald Runnicles.

It was broadcast live yesterday afternoon in Atlanta (evening in Germany). Like the Atlanta warm-up, the Berlin performance was ravishingly beautiful; in the final section Runnicles was caught on camera wiping away his tears. The ASO Chorus and chorusmaster Norman Mackenzie, as happened at their two previous Berlin collaborations, received outsized cheers from the audience and hearty applause from the philharmonic musicians. The concert soon will be available for repeated viewing.

On the site, you can catch live shows or troll an archive from recent months. The digital concert hall project launched in January 2009 and, as you’d expect from the Berlin Philharmonic, it upholds the highest artistic standards. The initial sign-in and some of the site’s navigation are a little cumbersome, but once the concert gets started everything is thoughtfully presented — your attention is almost never distracted from the musicians and the music. It’s not cheap: a single concert costs about $15, 30 days of unlimited use is $55 and a season subscription (more than 30 concerts) is $220. 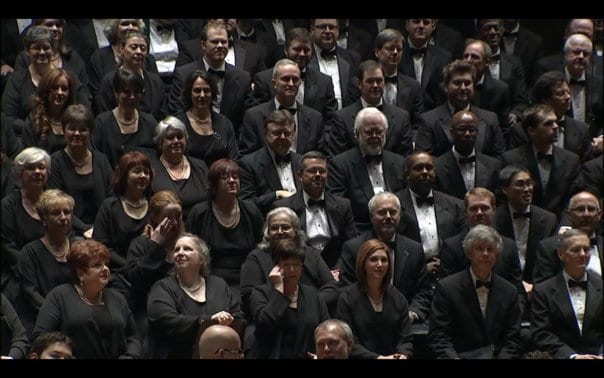 Members of the ASO Chorus at the end. A few wiped away tears.

I’ve only skimmed the surface, but the stuff is staggering, the last word in orchestral glamour: philharmonic Music Director Sir Simon Rattle conducting a bold, intoxicating account of Messiaen’s “Turangalîla-Symphonie” and a crisp reading of Schoenberg’s Chamber Symphony No. 1; the young Dutch violinist Janine Jansen, playing like a woman possessed, in a searing performance of Benjamin Britten’s Violin Concerto; Pierre Boulez conducting five of his own post-Debussian “Notations”; the unstoppable Christian Thielemann, whose interpretations are so commandingly comprehensive that he makes a lot of other conductors seem hollow, conducting Brahms. 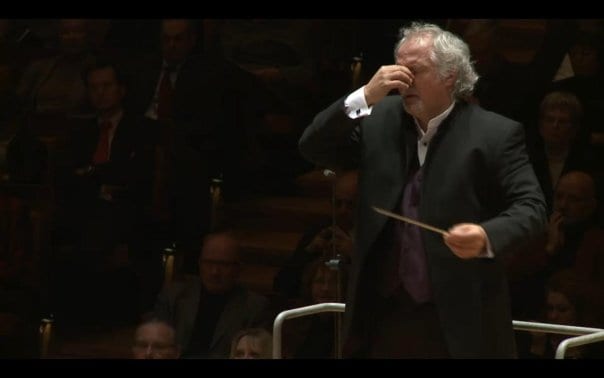 Conductor Donald Runnicles was caught on camera fighting back tears during the performance.

The digital concert hall is an English-language site, and almost all the (pre-recorded) intermission interviews are in English. For an American audience it’s not especially coddling and “accessible,” unlike, say, the popular Metropolitan Opera broadcasts into high-definition movie theaters, where the backstage goings-on constitute an essential part of the experience. But the Met HD shows are also heavily scripted, canned and “show bizzy.” For these Berlin concerts, there’s no host and no pre-concert chatter. When there’s singing, there are no translations on the screen. (Part of that is due to the orchestra/opera aesthetic divide and the German/American cultural divide.) 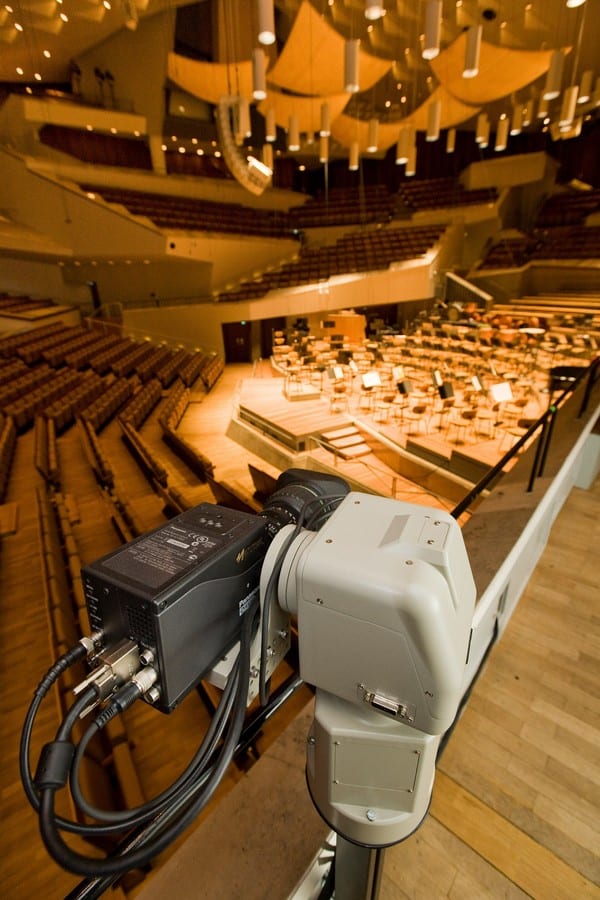 Cameras are discreetly mounted around the Berlin Philharmonie stage.

But the Berlin Philharmonie is a photogenic concert hall, and with the stage surrounded by audience seats, the intimacy is palpable. The players are, on average, surprisingly young, athletic and hungry — principal flutist Emmanuel Pahud, a dashing character, looks as if he just rolled out of bed and plays like a god. In a solo turn, for Elliott Carter’s Flute Concerto, he plays it like Haydn, witty and buoyant.

The intermission features are of special interest, too. They’re usually a member of the orchestra interviewing one of that concert’s guests. A horn player from England named Sarah Willis interviewed pianist Mitsuko Uchida, in a fascinating conversation, and they touched on the virtues and fears of the digital concert hall. When everything is eventually captured for international broadcast and archived forever, the “once-ness” of the concert experience will be lost. Willis admitted that “the stress factor goes up when we know the cameras are watching.” In another interview, Simon Rattle said that with today’s technology, the Berlin Philharmonic should flow into everyone’s home on demand, just like water and electricity.

The Berlin Philharmonic, like the Met Opera, is ideally poised to greatly increase its global market share. But even the Berliners realize that they’re stepping across a portal with unforeseeable artistic consequences.