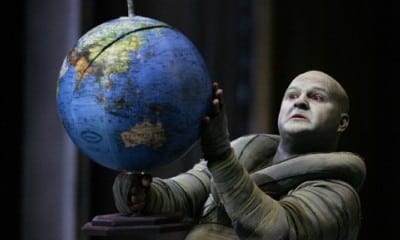 Editor’s note: We’re happy to introduce Thomas May as a guest contributor to ArtsCriticATL. His books include “Decoding Wagner” and “The John Adams Reader,” and he’s written and lectured extensively on opera and classical music, from criticism for The Washington Post to essays and program notes for the Lucerne Festival, the Boston Symphony, San Francisco Symphony and many others. Atlanta readers will recall that Tom covered the Seattle Opera’s “Ring” for the AJC in 2005, an event notable as conductor Robert Spano’s Wagner debut. — Pierre

Just a decade old, the UK-based label Opus Arte has built up a significant catalogue of contemporary productions of opera and ballet on DVD. The company recently added Bayreuth to its impressive list of European opera partners. Inaugurating the partnership are an upcoming DVD of “Tristan und Isolde” from last summer and a new “Ring” Cycle. The latter, under Christian Thielemann’s baton, was recorded live at the Bayreuth Festival in July and August 2008.

It’s no coincidence that the technologically forward-looking Opus Arte — an early adopter of the high-definition DVD and Blu-ray formats — here documents the current Bayreuth “Ring” via good old-fashioned CDs. In fact, this set marks the company’s first foray into the CD market. The stage direction by octogenarian German playwright (and opera novice) Tankred Dorst, which revolves around the idea of the modern and mythological worlds coexisting in parallel universes, has gained few fans since the production was unveiled in 2006. Instead, the real buzz around this “Ring” has focused on what Thielemann and the orchestra accomplish.

The CD format underscores the general consensus that this is destined to be known as “the Thielemann Ring.” Dorst, for that matter, doesn’t even get a mention in the four CD booklets, which include full German librettos (also rendered in French and in Stewart Spencer’s English translation), bare-bones synopses and short, so-so essays. Each booklet also needlessly reprints the same puff piece on Thielemann. The recording itself offers sufficient evidence that, quite apart from his cult status, this is an artist who has evolved into a singularly compelling Wagner interpreter.

So much so that Opus Arte’s release offers almost the illusion that we’ve been whisked back to an era before “Regie” — the omnipresent, meddling stage director — where our attention is riveted once again on the conductor as linchpin.

Not that there’s anything particularly retro about Thielemann’s approach. He doesn’t seem interested in mindlessly replicating mannerisms of the past. Rather, Thielemann demonstrates the well-judged, nuanced sense of flexibility that is essential for Wagner’s rhetoric to work its way through the pores.

I’m baffled by reactions to Thielemann’s style that characterize it as “pompous” and tending toward the slow and adipose. His “Ring” (which clocks in at 14 hours, 56 minutes, although the set distractingly includes the ritual of applause after every act) benefits from the conductor’s theatrically vivid, musically sensitive flow. Tempo choices seem to spring from the natural context instead of being egotistically imposed.

Exceptions are rare. Just before Siegmund’s “Winterstürme” solo and during Siegfried’s forging music, for example, Thielemann bridles the whole apparatus as if gingerly passing over a speed bump, with an odd “slow-motion” effect. (These are some of the few moments when you do feel that the absent stage picture might hold a missing clue.) And some things don’t quite take off, such as the first scene of “Das Rheingold,” which unfolds adequately, after a magnificent shaped Prelude, but gives a slightly restrained impression, never seeming as pivotal as it should.

But even here it’s clear that Thielemann is relying on his uncanny ability to keep the deep focus of the “Ring” continually in perspective. He avoids “stagy” effects with limited payoff, balancing dramatic momentum against the epic scope of the entire cycle. (His handling of the “Ride of the Valkyries” is a perfect example.) Even Thielemann’s full-bodied realization of the score’s layers — beautifully executed by the ensemble, which revels in Bayreuth’s darkly resonant, wood-grained acoustic — doesn’t come across as an end in itself, as a preening of the conductor’s feathers. Like the glimpse of a spandrel that suddenly reorients your understanding of a cathedral’s overall architecture, details spring to life in a way that lingers and triggers connections with other spots in the “Ring.”

Thielemann reveals a unifying force deeply rooted in the music, well below the surface structure of leitmotifs. And what makes the experience so richly satisfying is that he sustains this not by being coldly analytical but by breathing with the dramatic context. With each hearing I’m struck by Thielemann’s interplay of epic (call it “symphonic”) breadth and gorgeously colored detail. His span conveys an invincible dramatic logic that follows Wagner’s musical evolution as events unfold. Thus Thielemann’s “Rheingold” has a glistening, muscular freshness that is recaptured — after a very dark “Walküre” — in the first two acts of “Siegfried.” But he tempers the third opera’s fairy-tale high jinks with a lot of snarly menace: For once the fight with the dragon actually sounds scary. “Siegfried” as a whole is the strongest suit of this cycle, with a meaningfully paced though somewhat inconsistent “Götterdämmerung” in which the overshadowing curse that has been so carefully prepared occasionally loses some of its edge.

Much of this has to do with the casting, which elicits no illusions whatsoever of the glories of pre-Regie singing. The entire cycle, alas, is short on memorable or even compelling vocal performances among the lead roles. Andrew Shore makes a rather colorless Alberich in his first scene, with fairly lackluster Rhinedaughters (much improved for their “Götterdämmerung” reappearance). But the all-consuming anger we see in his Rheingold curse becomes genuinely riveting in Alberich’s later incarnation in “Siegfried,” and in the “Götterdämmerung” apparition, a relentlessly gnawing passion. As Wotan, Albert Dohmen adds a fascinating note of vulnerability in the transition from the arrogant, thieving god of “Rheingold” to Walküre’s Weltschmerz. And his understanding of the text often proves revealing (the diction of this set, by and large, is exceptional). But in his final guise of Wanderer, Dohmen doesn’t convey enough of his pivotal attitude change, and his Act Three encounters with Erda and then his grandson Siegfried seem oddly lightweight.

Linda Watson is an intelligent musician who can create an effective character onstage, but, on disc, her persistent vibrato wears heavily on the nerves and undercuts what should be a thoughtfully conceived Brünnhilde. Watson is at her most moving in the way she paces and phrases the great duologue with her father at the end of “Die Walküre,” but her characterization seems too limited to a kind of frenzied anger in her metamorphosis from loving to betrayed woman in “Götterdämmerung.” Her Immolation offers moments of sweeping grandeur but lacks the Zen-like, summing-it-all-up perspective that really needs to anchor the scene. (Atlanta native Adrienne Dugger, incidentally, was scheduled to sing the role in Bayreuth’s production in 2008, when this set was taped, but canceled on short notice.)

American singer Stephen Gould solves some of the Siegfried problem by virtue of the sheer lyrical beauty of his tenor — his ardor for Brünnhilde upon awakening her and in the duet of “Götterdämmerung’s” prelude is about as graphic as a heldentenor can get — yet he seems oddly muted in his first-act “Siegfried.” Indeed, Gerhard Siegel — one of the prizes of the set in his richly characterized, dark-sounding Mime — looms as the more powerful presence here. And in the scene of his murder in “Götterdämmerung,” Gould musters only a faintly tragic pathos. His parents have a very believable chemistry, with Eva-Maria Westbroek as another standout in her fragile but passionate Sieglinde and Endrik Wottrich (pushing his voice uncomfortably in the upper range) an impetuous and youthful-sounding Siegmund. Kwangchul Youn sings an uncommonly perceptive Hunding — phrasing so beautifully that you’re almost tempted to root for him, joining the side of Fricka (sung not as a nag but with urgent sincerity by Michelle Breedt).

In fact, rather than Alberich, Hagen seems an avatar of Hunding in the smoothly delivered interpretation of Hans-Peter König (also a rather poignant Fafner in his death throes). The lack of truly biting menace, though, is a problem for “Götterdämmerung.” The paradox is that this darkest part of the cycle loses much of the ominous quality that Thielemann so obviously masters elsewhere in the “Ring.” Ralf Lukas is just-adequate as Gunther, but we get a better-than-average Gutrune from Edith Haller (also the Freia). Her anxious night-waiting scene before “Götterdämmerung’s” final cataclysm is fine drama. Christa Mayer’s “Siegfried” Erda carries more conviction than her first appearance in “Rheingold,” and she is also part of an effective Norn trio. The Chorus, limited of course to its eruptions in “Götterdämmerung,” is in thrilling sound.

I find that continual grousing over a lost golden age of Wagnerian singers gets tiresome. Still, as a CD release, this “Ring” does conjure a number of unflattering comparisons with the great forebears of the past. The casting unevenness is, undeniably, a tradeoff for the advantage of Thielemann’s interpretation. On the other hand, for an up-to-date record of where we are as the “new Bayreuth” lines up its future course, this set is a valuable addition — and even more so as the first official recording of Thielemann’s work at Bayreuth (where he made his debut in 2000 with “Die Meistersinger”). The mid-price tier where Opus Arte has placed it makes this release, while clearly not an “essential” recording, all the more attractive for Wagnerians of all stripes.