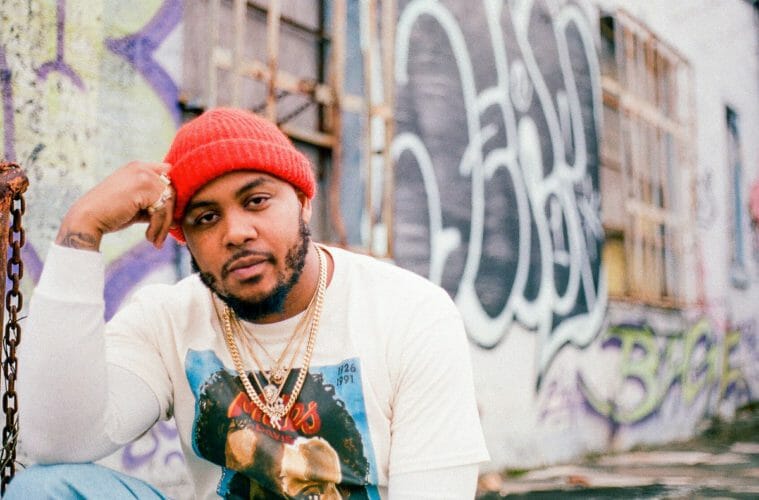 It’s tough to pick a single track to highlight from GRIP’s prodigious new album, I Died For This? It’s his third full-length studio album but has already garnered a whole new cadre of fans. This record is being put out by Eminem’s label Shady Records, which in July added GRIP, aka Kyle Clow, to a list of artists that includes 50 Cent.

Other standout tracks include “Hands Up!” and “Glenwood Freestyle!” (a reference to the street in Decatur), but this one’s our pick in part because of the verse in which Marshall Mathers advises on the pitfalls of stardom — for which GRIP is now almost certainly headed.

GRIP has been seemingly on the verge of breaking out for years — tottering on the brink of fame, gaining the attention and respect of those who were listening. The problem is not enough people were listening — that, and bad luck like a global pandemic putting everything on hold. Then — like something out of a movie — one of the biggest rap stars of the last 25 years gave him a call and the rest was (or perhaps will be) history.

According to GRIP, his new album was conceptually inspired by the Beatles’ Sgt. Pepper’s Lonely Hearts Club Band and the Beach Boys’ Pet Sounds — one on which he mulls over what it means to attain success, and the price of ambition.

“Deep Sleep” is the multi-faceted and talented Often’s second single from her upcoming October release Dirty Saint. Originally from Ohio, the indie-pop singer/songwriter, who goes by pronouns she/they, has worked as a photographer, which is probably why her videos feature such striking visuals.

Often performed with an electronica chill pop duo called DIMES in New York before making her home base in Atlanta and pursuing a solo career. (She has also spent a chunk of the pandemic in North Carolina, where she has family ties.) Her music has been featured in the Showtime drama The Affair.

Of her songwriting process since 2020 hit, she said in a recent interview that “last year was particularly hard, as it was for literally everyone. But it also gave me a lot of time to sit and stew and work things out and be mad in ways I never gave myself the grace to be.”

In honor of the recently departed Ed Asner, here’s an ode to the beloved that gave us the grumpy but lovable Lou Grant. It’s an offbeat cover of The Mary Tyler Moore Show theme song, pulled off by one of Atlanta’s most gloriously strange legends, the one-of-a-kind, gone-too-soon Benjamin, who often performed under the stage name Miss Opal Foxx.

Born in Georgia as Robert Dickerson, Benjamin gravitated to drag early on, quipping in interviews about going to Waffle House wearing a dress as a child. He came up in Atlanta’s underground scene in the 1980s and ‘90s, and although a lot of the footage available of him is fairly poor quality, you can still get a sense of how electric it must have been to be in his audience. He was an iconic figure in Cabbagetown, describing it in one interview as a place “where children build go-carts, go to jail early and watch their parents do lots of inhalants.” (One can only imagine what he might have thought about the much-gentrified area now.)

The Opal Foxx Quartet was one of the seminal bands of what became known as the Cabbagetown Sound. The Love That Won’t Shut Up — our Vintage Track of the Week — was released in 1994, produced by R.E.M.’s Michael Stipe.

Benjamin struggled with addiction for most of his life, especially amphetamines and smoking, which impacted his voice, transforming him into a Southern-fried Tom Waits. He died in 1998 at the age of 39 from Hepatitis C and AIDS. One of the last concerts he gave before his death was with his band Smoke, opening at the Variety Playhouse for Patti Smith in 1997. Smith wrote this poem for him as a tribute: “With a throat smooth as a lamb yet dry as a branch not snapping/He throws back his head yet he does not sing a thing mournful.”