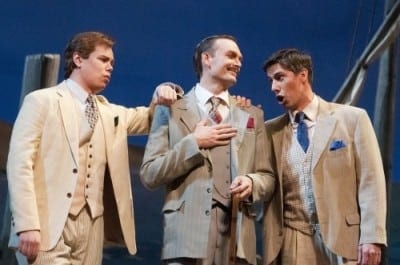 Atlanta Opera’s “Così fan tutte” is a night of impeccable singing from every single member of the young cast. Mozart’s masterpiece has arias for each of its six singers, and much more in the way of ensembles of every description. All came across with great distinction Tuesday at the Cobb Energy Performing Arts Centre. There will be two more performances, Friday and Sunday afternoon. 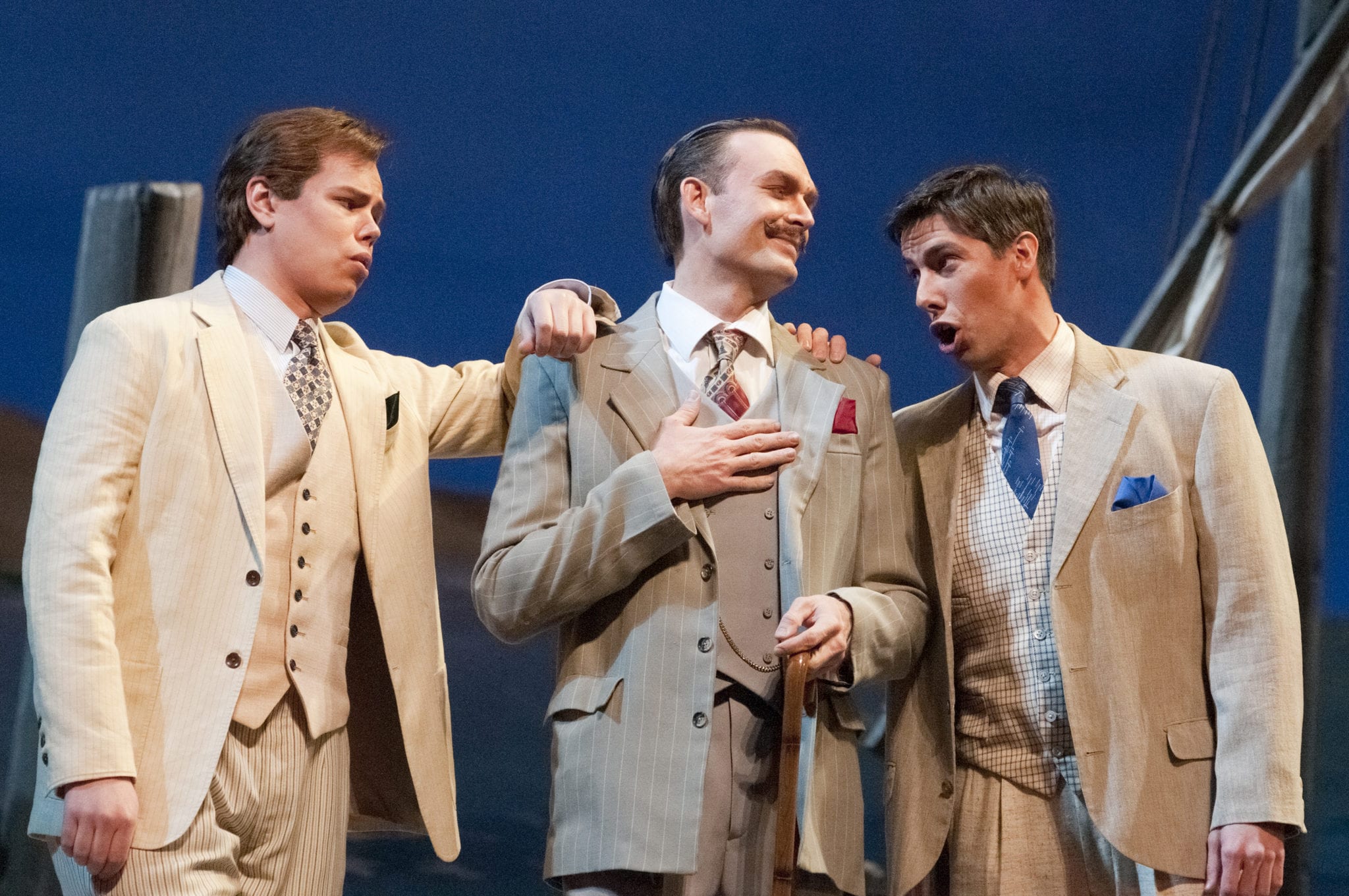 By classical convention, “Così” takes place in a single day. Guglielmo and Ferrando are convinced that their sweethearts, Fiordiligi and Dorabella, are incapable of infidelity. Don Alfonso wagers that he can prove otherwise, and launches a caper in which the two lovers pretend to march off to war, then return disguised as “Albanians” and are made to successfully woo the unsuspecting girls, all with the help of their maid, Despina, who appears in various disguises.

In the 18th century, modern notions of “realism” was not to be found on the opera stage, which was filled with disguises, potions and all manner of nonsense. A suspension of disbelief was part of the game. “Così” is a farce, yet it has a cynical edge. Betrayal is at its heart. There is a fig leaf of forgiveness at the end, perhaps, but the essential lesson — “all women are like that” — is a pretty dark one. What has made this opera a masterpiece is Mozart’s score, a thing of impossible beauty, intricately constructed. 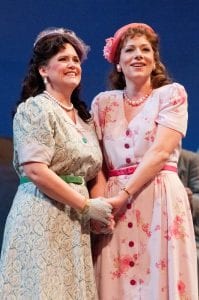 Soprano Keri Alkema sang Fiordiligi with a rich, secure sound and fine technique. Hugely talented, she seems to have burst onto the scene in the last year or so after switching from the mezzo register. Mozart loved his sopranos, and gave them his best music. None of it was wasted on Alkema, whose portrayal of frailty and sensitivity served to pull the evening back from farce to melodrama.

Atlanta mezzo Jennifer Holloway brought a bright, focused, seemingly effortless sound and movie-star good looks to the role of Dorabella. She used facial gestures and body language to heighten an impish and playful portrayal of her character, making for an ideal contrast with Alkema.

Matthew Plenk brought a trumpet-like light tenor voice to the role of Ferrando. There is ample power in his voice, and a level of security not normally heard in such a young tenor. Fast-rising Canadian baritone Phillip Addis sang the role of Guglielmo with compelling vigor and creamy sound, secure in the upper register.

In any ordinary performance of this opera, Kiera Duffy would have easily stolen the evening from everyone with her vivid portrayal of Despina, the maid. She has a comedic character voice, but she can turn in a nicely colored soprano aria when needed. It helps that she is an acrobat on stage. Hers is the role that wanders most into farce, and this requires a certain degree of control, which she managed. The disguises and camping that the opera requires are never really believable, but they need to be taken seriously in order for the audience to suspend disbelief, and that is the gift Duffy brought.

Bass Jason Hardy was a commanding Don Alfonso. His dark voice and dignified bearing brought a serious tone to the role, yet he handled the comic demands with dispatch. He was made up to resemble Lawrence Olivier, or so it seemed, which kind of worked for this part.

This was not a great night for the orchestra. In the fast-paced overture, Kazem Abdullah, a protégé of James Levine’s and making his Atlanta debut, seemed unable to exert control. Flawed entrances, coordination problems and imperfect string tone plagued the evening. It’s likely that this was at least partly due to limited rehearsal time. And the orchestra, shrunk down to Mozartian size, was fully exposed. But Abdullah deserves credit for excellent coordination in the singing ensembles.

“Così” is a good opera for Atlanta, not only because it lends itself to the kind of young voices a striving company like Atlanta Opera can attract, but because its staging demands are relatively modest. You don’t need much, and it’s hard to screw it up. Still, this production was a bit of a muddle. Argentine director José Maria Condemi probably would have preferred to create his own production from scratch — sets, costumes, lighting and all — and with a generous budget. But opera is often about compromise, and this seems an extreme example. 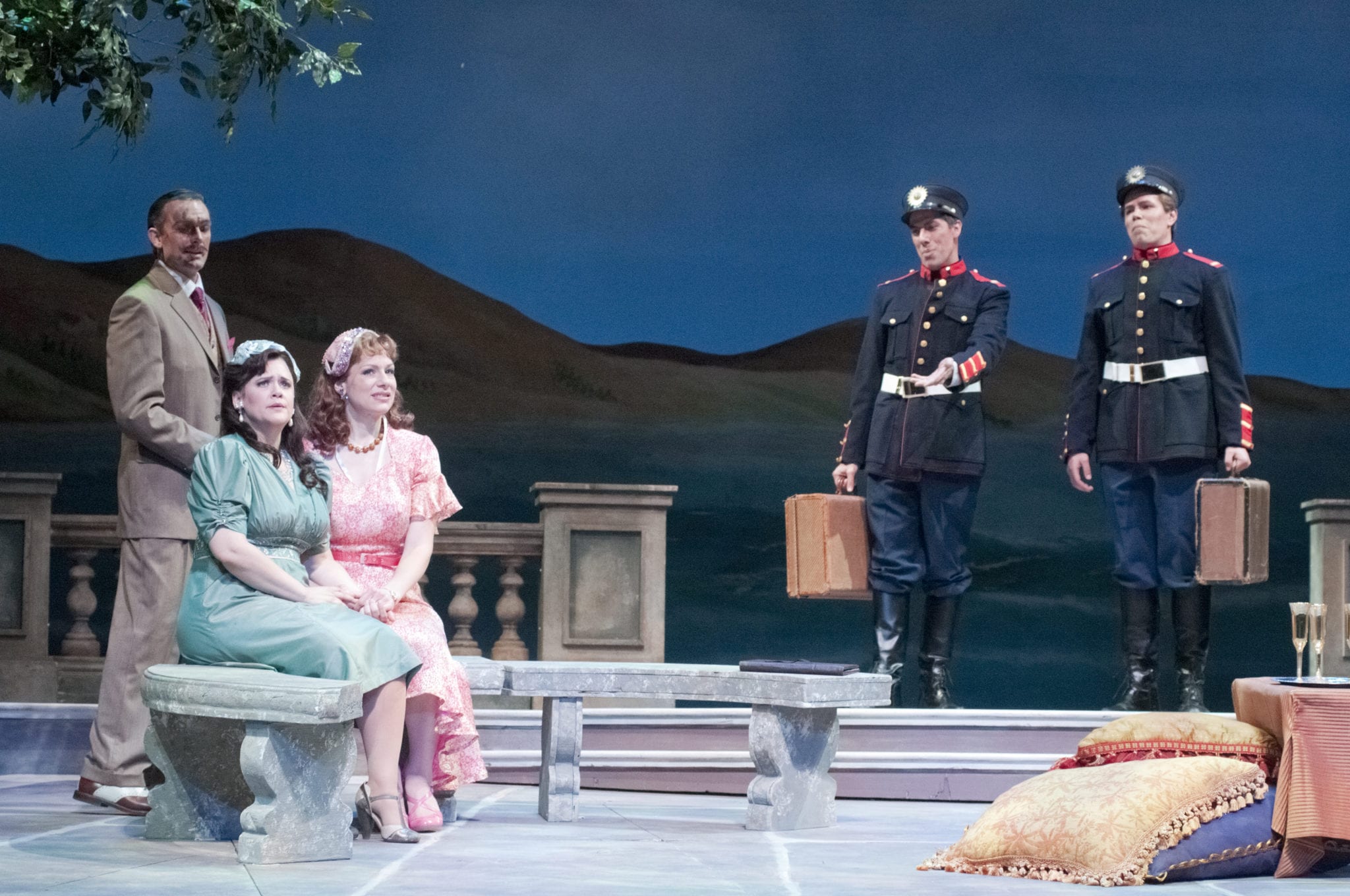 In 2005, Condemi was invited to San Francisco Opera to re-stage a production created the previous year by eminent director John Cox, who updated the work by setting it in World War I. Updating is often a way to inject freshness into warhorse operas, or to add context. Condemi must have liked Cox’s idea, as he decided to stage this Atlanta production in wartime as well, this time in World War II Italy. Unfortunately, and presumably for budgetary reasons, he was stuck with the set from Atlanta’s 2000 production at the Fox Theatre, a quaint, frugal-looking seaside unit set (designed by Peter Dean Beck) with an ornate proscenium and an ancient boat. So, for his concept, Condemi was limited to some uniforms for the men, 1940s frocks for the girls, and a few extra soldiers milling around. It was harmless, but hardly the sort of radical idea that might warrant the solemn, full-page insert we got in the program. Condemi’s saving grace was the way he drew finely honed and balanced portrayals from the cast.

Opera is about singing, and few operas offer so much of it. The unseen heroes of this performance were the administrators responsible for casting. Someone up there knows what to listen for.