Bob Wages with the 1972 logos he designed for the Atlanta Hawks and Atlanta Flames. (Photo ©Paul Wages, 2014)

When the Atlanta Hawks unveiled a revised version of the historic “Pac-Man” logo in Game Six of their playoff series against the Indiana Pacers, no one could have been happier than Bob Wages. Now 62, Wages conceived the iconic image as a 24-year-old, just out of college and new to his first job at powerhouse McDonald & Little.

“He looked like a kid,” remembers agency cofounder Mike McDonald, 82, and still actively involved in marketing projects locally and globally. “I thought he was 14!”

On his first day at McDonald & Little, Bob Wages, an assistant art director, was assigned to a team to design layouts for an ad campaign promoting then-unknown Senate candidate Sam Nunn from Perry, Georgia. Nunn won, a boon to Georgia politics. But it was the next assignment that would be a game changer for the young designer.

The agency had been hired by a group of local investors (led by Tom Cousins, Charles Loudermilk, Paul Duke, Bobby Chambers and Dillard Munford) that owned the OMNI arena, the Atlanta Hawks and a new NHL franchise they’d soon name the Atlanta Flames. Ted Burn, the agency’s senior art director, “had a keen eye for talent and knew Bob Wages had an aptitude for logos,” recalls McDonald. He asked Wages to design the teams’ logos.

“Bill Putnam was CEO and GM of The OMNI Group,” said McDonald. “He trusted us and so gave us free reign to find solutions. When it came time to show the Hawks’ logo design, and later that of the Atlanta Flames, Putnam knew the logos were winners.”

“You can imagine how I felt,” recalls Wages. “Straight out of design school, I was designing logos for two major league sports franchises. It was surreal.”

The Flames launch campaign was entitled ”The Ice Age Has Come to Atlanta.” It was a monumental success, helping to sell 11,000 season tickets for the 14,000-seat OMNI Arena before the first season even began.

“In some ways, the 1972 Hawks logo was eclipsed by the hullabaloo surrounding the Flames’ launch,” Wages remembers. “Not that the owners complained. Everyone went to a lot of hockey games back then. It was the hottest ticket in town.”

Wages says many people have asked him over the years why the two franchise logos have the same line weight, same clarity, same scale and same color. “It’s because they were designed for the same owners, at the same time, and developed to fit in with the OMNI logo designed by my boss, Ted Burn. It was smart branding, plain and simple.”

Looking back, Wages says the attitude of the 1972 Hawk was captured by three elements: “Coke Red,” its determined eyes, and the sharp point of the beak. Likewise, he says, the Flames’ intensity was suggested by the same red, the flame in the letter cross, and, mostly, “by the clever name that dramatizes the tension between the words fire and ice.”

In 1977, Wages left McDonald & Little to open Wages Design. [Disclosure: the author worked for Wages Design from 1991 through 1995.] He is still designing today, and many of his logos are famous, including Cox Communications, Georgia State University and ZEP. In 1999, he was named an American Institute of Graphics Arts Fellow by the organization’s local chapter. It is the organization’s highest honor. 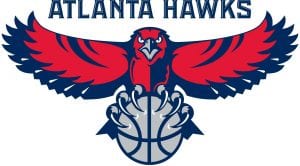 The current Hawks logo, adopted in 1995.

The Hawks introduced the current logo in 1995, but Wages’ logo never really disappeared. The Hawks were still using it as its Twitter avatar before replacing it with the new 2014 version. The reason is clear: the 1995 logo design is complicated and does not reduce well, plugging up in small applications. Plus, the popularity of the original design never waned; it remains one of the best-selling retro logos in the NBA.

McDonald can’t understand why the franchise switched logos in the first place. “The so-called ‘Pac-Man’ logo was classic, pure and honest. It was memorable . . . It worked large. It worked small. Most importantly, it looked great on uniforms racing up and down a basketball court whether you were at a game or watching it on TV.” 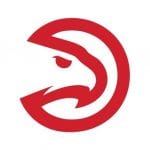 He thinks the revisions to the original logo, which make for an angrier bird, are a design insult. “Why bring back the iconic ‘Pac-Man’ logo but feel compelled to add to it? They actually diminish it because ‘more is less,’ as great Mies van der Rohe once said. And I agree.”

Wages, however, is sanguine. “Re-launching any logo requires change to generate excitement. I might not have done exactly what their designers did, but I would have toyed with the look of the bird, too. When we worked on the design in 1972, we struggled with the fine line between a fierce bird and an angry bird. I think we got it right.”

Hawks press releases say the 1995 logo isn’t going anywhere, but the reason is likely financial, not devotion. The NBA charges teams a fat fee for logo changes because it doesn’t want a lot of unsold merchandise rotting in a warehouse.

While the Hawks marketing department did not respond to requests for a statement, it is clear the club sees the value in the 1972 logo and its angry 2014 spawn. The club promoted it heavily, draping 19,000 T-shirts over arena seats before the final home game. News of the relaunch was reported by news organizations and bloggers across the country. 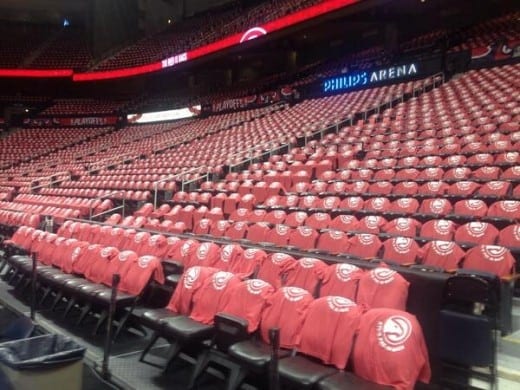 T-shirts with the new/old logo decorated the arena for the final home game.

Until the morning it was announced, Wages was unaware his logo would be resurrected. Watching the game on TV that night, he was delighted to see a sea of fans were wearing a familiar old bird across their chests urging the Hawks to victory. While the Hawks lost that game, the energy in the arena that night recalled the glory days of Dominique Wilkins and Spud Webb.

“I had no idea my old bird was going to show up for that game,” Wages said. “But, by golly, I’m delighted it did.”