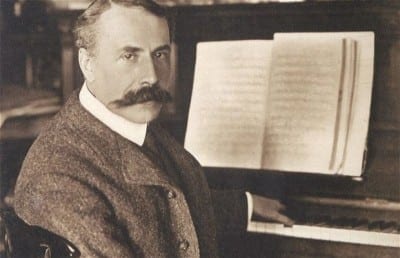 In December 1908, Hans Richter, the great Austro-Hungarian conductor who had led premieres of several of the great masterpieces of Wagner, Brahms, Bruckner and Tchaikovsky, began a rehearsal with the London Symphony Orchestra with these words: “Gentlemen, let us now rehearse the greatest symphony of modern times, and not only in this country.” 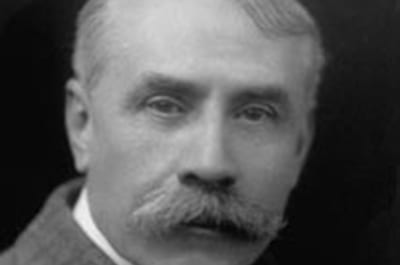 The work in question was the First Symphony of Edward Elgar (1857-1934). Richter had just conducted its premiere with his Hallé Orchestra in Manchester, where the symphony had been a resounding success. The London performance also was a triumph, and within a year Elgar’s First Symphony had received more than 100 performances on three continents. Not a bad showing in an era before radio, long-playing records or YouTube. Although Elgar (left) had not exactly been unknown in Britain previously (his 1899 “Enigma Variations” and some works for the coronation of Edward VII in 1902 had received acclaim), the success of the First Symphony thrust its 51-year-old composer into a prominence he had never before enjoyed and had scarcely allowed himself to imagine. Suddenly, Elgar was being proclaimed England’s first symphonist and the first true musical genius ever to spring from what Napoleon had derided as a prosaic “nation of shopkeepers.” (Both Napoleon and most of Elgar’s contemporaries were ignorant of the glories of English music in the 16th and 17th centuries.)

The symphony is monumental in scale, as befits a work described by its creator as having “no programme beyond a wide experience of human life with a great charity (love) and a massive hope in the future.” Its core is a grand and noble melody presented at the opening of the work, first quietly by the winds and low strings and then with resplendent radiance by the full orchestra. This theme is the embodiment of that “great charity” and “massive hope” and pervades all four movements of the symphony, just as hope and love pervade and sustain human life. But, as in life, this sustaining force is constantly assailed by other forces — often represented by alien keys, such as the D minor that rushes in shortly after the first presentations of the motto theme — that threaten to submerge or extinguish it or to pervert it into unrecognizable forms.

Still, throughout the life-journey of the work, the theme continues to appear, even if only in quiet fragments, to guide and illumine a path forward, and in the finale it emerges triumphant. Its triumph is not exactly the victory after heroic struggle that characterizes many Beethoven finales, but rather the luminous confidence in the inevitability that what is best in mankind must prevail. Elgar’s First Symphony is perhaps the greatest musical expression of the progressive optimism that greeted the 20th century.

Unfortunately for Elgar, the 20th century was a time of radical change at dizzying speed. Less than a decade after the First Symphony took the world by storm, that same world was locked in “the war to end all wars.” In the shell-shocked Europe that emerged afterward, the charity and hope of Elgar’s great symphony no longer seemed progressive. In Vienna, Arnold Schoenberg and his disciples were exploding the system of chromatic tonality that was Elgar’s lifeblood. In Paris, Igor Stravinsky was abandoning his pre-war post-Romanticism for neoclassical reserve and “Les Six” were concocting an intoxicating mix of irreverent wit, cafe-concert breeziness and a re-interpretation of “le jazz hot” imported from America — all inimical to the high-minded ideals of musical art that Elgar had propounded during his brief stint as a professor of music in Birmingham while he was writing the First Symphony. And in America, composers as diverse as Charles Ives, George Antheil and George Gershwin were offering music far more “progressive” than anything ever imagined by Elgar. Even in England, Elgar seemed to be part of the Empire’s illustrious past: a relic honored with nostalgic performances of “Land of Hope and Glory” but relatively little else.

Like many long-lived composers, Elgar lived to see himself passed by in favor of newer artistic fashions he despised. Though at his death in 1934 he was commemorated all over Britain as “our Shakespeare of music, born and died on the soil in the heart and soul of England,” the further social upheavals of the worldwide Great Depression and the subsequent sequel to the war, as well as the rise of new forms of popular music that replaced the light music that Elgar also wrote throughout his career, soon eclipsed his sun almost entirely. Finally, in the 1950s, the advent of the long-playing record and his birth centennial began a modest revival of interest in Elgar, which gained in strength with increasing numbers of recordings of his works in the following decades.

In this respect, Elgar’s musical fortune somewhat resembles that of his rough contemporary, Gustav Mahler, another early-20th-century writer of massive symphonies whose once progressive ideas got lost in the midcentury maelstrom and were slowly rediscovered decades after his death. But Mahler has by now become mainstream repertoire, while Elgar still is heard comparatively rarely outside Britain.

These performances of the Elgar First will be only the work’s third outing with the Atlanta Symphony Orchestra, which waited until 1986 to present it for the first time. For most Americans, Elgar still is the composer of the trio theme of the “Pomp and Circumstance March No. 1” that has led them in commencement ceremony processionals from kindergarten to college — and very little else.

This season, however, the ASO is leading a charge for a new assessment of Elgar here in Georgia. In addition to the performances of this “greatest symphony of modern times” in January, Atlanta audiences will have the opportunity in February to hear the composer’s final masterwork, his melancholy Cello Concerto. And in May the ebullient “Cockaigne” Overture, Elgar’s affectionate picture of London, from the majesty of imperial Edwardian kings and queens to the vulgarity of Cockney pearly kings and queens, will take the stage. Perhaps this “Elgar Spring” will encourage the budding Elgar revival into full flower.