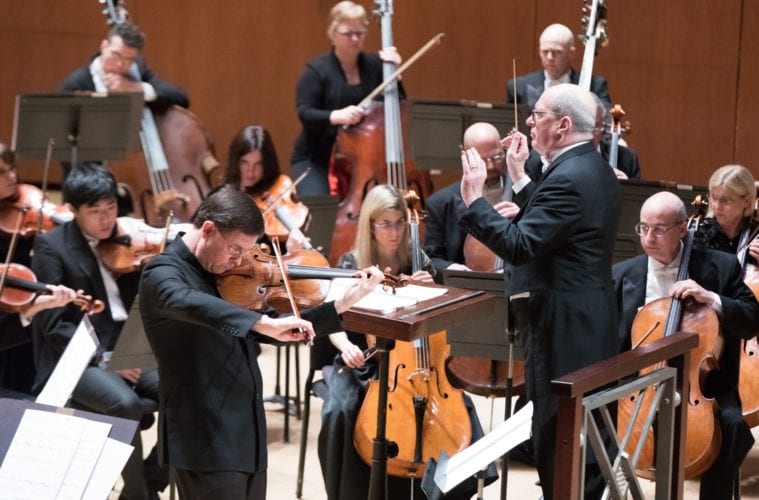 A fresh pair of 21st-century works and a grand masterpiece from the early 19th century were on tap at Thursday evening’s Atlanta Symphony Orchestra concert at Symphony Hall, making for a thoroughly enjoyable and exciting evening of music-making. ASO music director Robert Spano conducted the concert, which featured violist Roberto Díaz as guest soloist. The program will be repeated on Saturday at Symphony Hall.

The concert opened with “City of Ghosts,” a recent work by Australian composer Alex Turley. As the title suggests, the music evokes a desolate, deserted urban landscape shrouded with fog and mist, overlaid with a patina of ethereal supernaturalness. It’s 10 minutes of shimmering spookiness, vacillating between cloudy obscurity and moments of clarity. But the work succeeds well in its brevity, as any longer a duration would have been too much.

Then came the much-anticipated “Viola Concerto” of Jennifer Higdon, with Roberto Díaz as viola soloist. The concerto was written for Díaz in 2014, co-commissioned by the Library of Congress and Curtis Institute of Music. Last year, the subsequent recording by Díaz and the Nashville Symphony won Higdon a Grammy for Best Contemporary Classical Composition.

It is an optimistic work: very American in character with great variety in color and expression. It’s lyrical passages for solo viola are uncharacteristically sunny for the instrument, which is too often relegated by composers to darker and brooding passages. In places where the viola part takes up a more rhythmic character, the music’s American pedigree really shines. “Viola Concerto” also takes several surprising turns that add interest. Overall, it’s a wonderful work that is a valuable addition to the relatively sparse repertoire of viola concertos, beautifully and lovingly performed in this concert by Díaz, Spano and the ASO.

The epic Symphonie fantastique by Hector Berlioz came after intermission. Spano guided the orchestra’s sound splendidly throughout, avoiding the all-too-common pitfall of brash excess and allowing the music to have a better impact and be fully fantastique without becoming frénétique. Atlanta is one of a small group of U.S. orchestras to own a set of large church bells created to match the requirements of the Berlioz score. (Courtesy of Jeff Roffman)

The story portrayed by this programmatic work is that of an artist’s self-destructive obsession with a beautiful woman. His passions and dreams, ecstasy and despair are played out over the course of its 52 minutes, to the point of the protagonist taking a not-quite-fatal dose of opium, inducing hallucinations of being marched to the gallows and witnessing a witch’s Sabbath.

It takes a while for the story to build to that apex. The opening “Reveries, Passions,” waltzing “A Ball” and pastoral “Scene in the Country” all set the lovelorn character. The work takes a darker turn with the imposing “March to the Execution” and the final and harrowing “Dream of a Witch’s Sabbath.”

Before the closing movement, ASO principal percussionist Joseph Petrasek quietly slipped offstage to position himself behind two enormous bronze church bells. At measure 102, he began to ring the bells at a three-note death knell, repeated over an ominous rendition of the “Dies irae” sequence from the liturgical Requiem Mass. Atlanta is one of only a few U.S. orchestras to own a set of the massive bells, which were created to precisely match the requirements of Berlioz’ score, commissioned and cast for the ASO and first used in a performance of Symphonie fantastique in 2014.