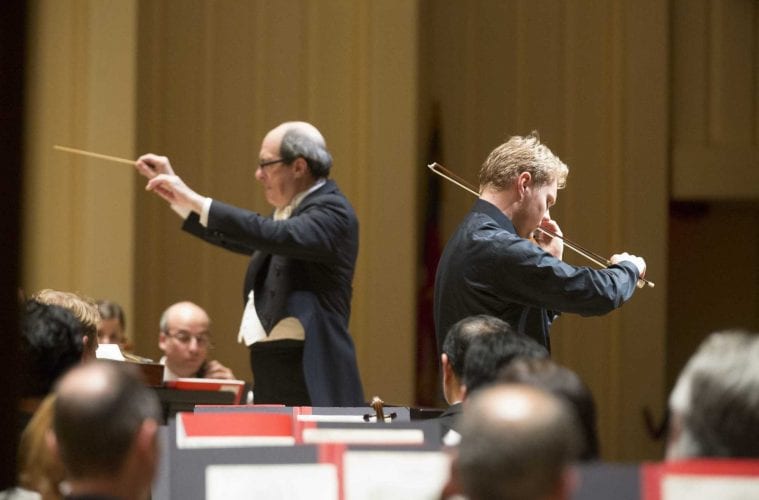 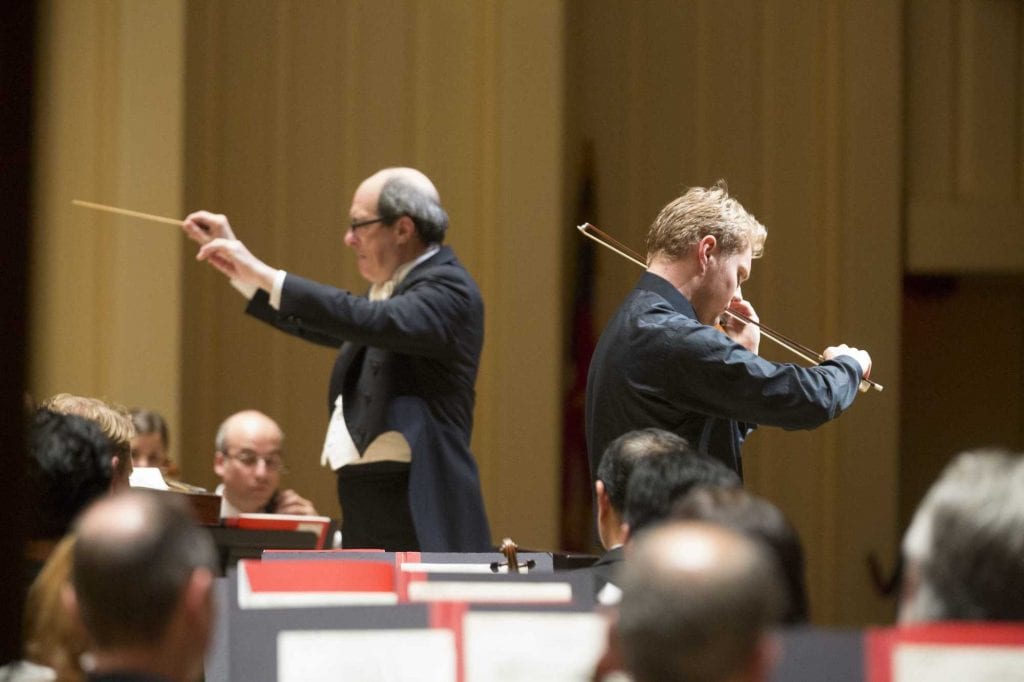 The concert opened with “Arena” by Lindberg, a Finnish composer born in 1958 and now serving as composer-in-residence of the New York Philharmonic. The N.Y. Phil itself performed “Arena” two years ago, coincidentally on the same program with the Sibelius Violin Concerto, just as the ASO is doing this week.

“Arena” is a relentless 15-minute work that might as well be a concerto for conductor. It was written in 1995 as an obligatory contest piece for the first Jean Sibelius International Conducting Competition in Helsinki, with the goal of posing technical and artistic challenges for the person holding the baton.

Throughout the single movement, whizzing strings, jumping figures in the woodwinds, boldly clustering brass and a busy percussion battery plus piano, celesta and harp are deployed in concurrent linear strands. They are woven together across contrasting episodes that have a feeling of tight, if dense, harmonic foundation. Lindberg does, however, demand dynamic balances that allow individual phrases to come through prominently, among them a notably rapid, hand-stretching cello solo in the middle, played by associate principal cellist Daniel Laufer, who was occupying the principal chair for the evening, as he did last week.

In its last few minutes, the Lindberg’s texture took on a not-quite-Mahlerian cast, though its symphonic sensibilities in general might find more sympathies with late Witold Lutoslawski. Overall, the ASO and conductor Robert Spano gave the difficult score an attention-holding performance of hot-wired tensile strength.

The concerto du jour came next: the sole Violin Concerto of Jean Sibelius, for which the soloist was ASO concertmaster David Coucheron. He was last a soloist in a subscription concert just this past November, when he shared the spotlight with principal cellist Christopher Rex in the Brahms Double Concerto with celebrated composer-conductor Oliver Knussen at the podium. Last weekend, Coucheron performed twice with Spano as pianist rather than conductor at the Amelia Island Chamber Music Festival on Friday and then at the Madison Chamber Music Festival on Saturday.

In effective music-making, the word “accompanist” does not apply so well as “collaborator,” whether one is speaking of a pianist or a conductor. What is clear is that Coucheron and Spano have an affinity for collaboration, unlike Knussen, who in November seemed interested only in his own music versus other pieces on the program, including the Brahms Double.

Spano is in his element with any music of Sibelius, and the developed collaborative communication between him and Coucheron did well for the Violin Concerto. The piece is highly virtuosic, but it is also copiously melodic. Coucheron’s penchant for sweetly lyrical tone fit that, and he covered the technical bases as well. After the concert, a few members of the string section were overheard describing his performance as “outstanding.” The audience agreed in its ovation, particularly a highly enthusiastic section about two-thirds of the way back in orchestra right who in particular seemed to be Coucheron fans.

The second half of the concert was a staple of the repertoire that’s a sure-fire symphonic crowd pleaser, Tchaikovksy’s Symphony No. 5. This orchestra could likely play this in its sleep, but it did not. The performance was happily ears-wide-open, robust and fresh in this hearing, whereas it could easily have been tossed off as a familiar run-though. Among the solo standouts was the signature horn melody in the second movement, played with noble lyricism by principal horn Brice Andrus.

Spano’s tempos kept the momentum going, particularly in the last movement. While they did not seem rushed, they did feel front-edged, certainly at a pace enough to keep the orchestra from going into union overtime.

The concert will be performed again tonight and Saturday in Symphony Hall.