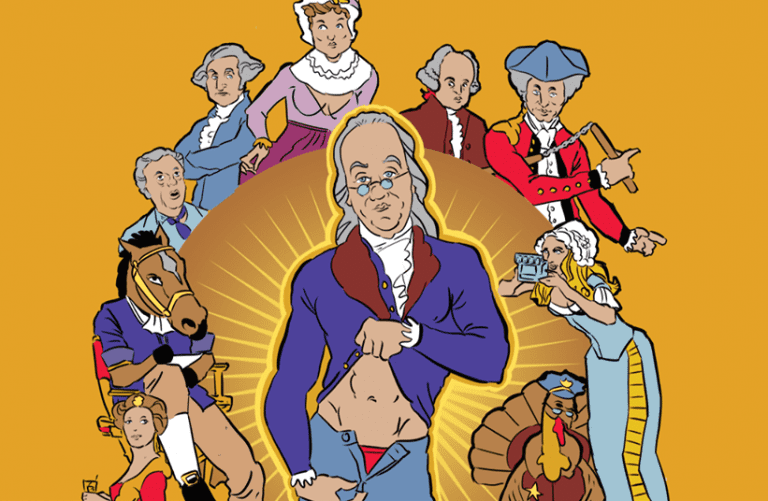 Dad's Garage will tell the story of America's hottest founding father in Benjamin Franklin: American Gigolo. It's just one of the many great shows in town that aren't Hamilton. (Image courtesy Dad's Garage)

The touring production of the Broadway blockbuster Hamilton arrives at Atlanta’s Fox Theatre this week for a 14-day run of 22 beyond-sold-out performances.

If you’re smart, lucky or rich, you’ve got tickets, but if you’re more like us, you have some empty space to fill in your calendar over the next couple of weeks. Fortunately, we happen to know there’s more than just one great show in town. (And even if you did score Hamilton tickets, you need to get out more than just once in a blue moon! Show your Atlanta-based arts organizations some love this summer, too).

Here is ArtsATL’s list of top 10 things to do in Atlanta that aren’t Hamilton.

Not content to sit outside the Fox and weep, the plucky kids at Dad’s Garage have put together a show of their own about an even better founding father. Taking history into their own hands, the comedy troupe brings to the stage the story of Benjamin Franklin, the “amazing, underrated,  X-rated , founding father.” Is it fact? Fiction? A bit of both, says the company. They call their show “almost as good as Hamilton, but twice as sexy.”

At $330 plus fees per top ticket, Hamilton is an expensive show. How about getting together with family and friends for something free? The Atlanta Jazz Festival, now in its 41st year, brings world-class jazz acts to Piedmont Park for a multistage family-friendly extravaganza. The lineup this year includes Dianne Reeves, Jon Batiste with the Dap-Kings, The Bad Plus, Jazzmeia Horn, Cory Henry and the Funk Apostles, Tia Fuller Quartet and more.

This big musical from a classic Broadway era gets an intriguing revival at Theatrical Outfit this summer. Created in 1963 by the same composing team that created the runaway Off-Broadway hit The Fantasticks, 110 in the Shade is based on N. Richard Nash’s 1954 play The Rainmaker about a con man who arrives in a small, drought-stricken town in Texas to convince its residents he can bring rain. The upbeat show had the bad luck of opening in 1963 just a few weeks after the Kennedy assassination, so it wasn’t the hit its creators anticipated. But Theatrical Outfit artistic director Tom Key is convinced Atlanta audiences will agree it’s a lost classic.

Basing a musical on a coffee table book probably doesn’t sound very promising, but Regina Taylor’s 2002 Off-Broadway gospel musical inspired by the bestselling book Crowns: Portraits of Black Women in Church Hats was an unexpected hit. Pick out something stylish to wear and check out this new production from Atlanta’s Dominion Entertainment Group.

Baritone Michael Mayes sings the title role, and Maria Zifchak performs as Mrs. Lovett in the Atlanta Opera’s production of Stephen Sondheim’s dark, sinister classic about a razor-wielding barber out for revenge and the owner of a local pie shop simply doing her best with what’s on hand.

Who needs Hamilton when you’ve got Peter? Serenbe Playhouse presents a world premiere musical adventure by Roger Q. Mason based on J.M. Barrie’s classic. When Serenbe Playhouse says “adventure,” they mean it, setting their shows outdoors and reliably offering loads of kids’ activities for before and after the show.

You don’t get nicknamed “The Tina Turner of Peru” because you put on a dull show. Combining indigenous, African and Spanish musical heritage in a style called música criolla, Eva Ayllón has been nominated seven times for the Latin Grammy Awards for her albums, but it’s her live shows that have truly won her the unswerving devotion of fans worldwide.

Founded by dancers of the Atlanta Ballet looking to push dance in the city forward, the Terminus Modern Ballet Theatre has been presenting its performances around Atlanta for just over a year now. Their latest production, choreographed by the company’s own Tara Lee and presented outdoors at Serenbe, will be one of the don’t-miss art events of early summer.

A new family musical looks back to the classic stories of Pooh Bear and his friends in conjunction with the High Museum exhibition Winnie-the-Pooh: Exploring a Classic (June 3–September 2), exploring the creation and legacy of author A.A. Milne’s beloved stories.

When your friends start subtle-bragging about their Hamilton tickets, casually drop mention of your great seats for U2. If that doesn’t shut them up, nothing will.