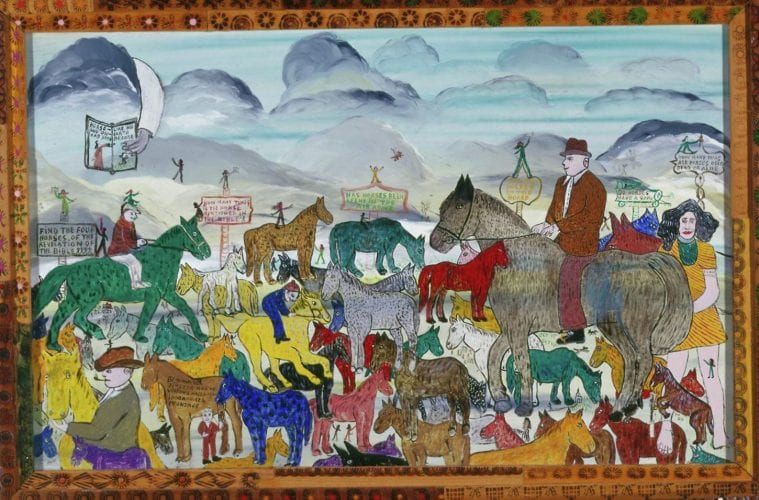 The Wonder of it All. A new exhibition features works by Susan Cofer and Jerry Siegel along with other artists in MOCA GA’s permanent collection. Through June 30. Museum of Contemporary Art of Georgia.

Susan Cofer: Drawings. The renowned Atlanta-based artist shows new drawings at Poem 88, her first solo show at the gallery. Through May 24. Poem 88. Imaginary Worlds: Once Upon A Time brings fantastical creatures to the Atlanta Botanical Garden this summer.

Walker Keith Jernigan: Broken Artist Dreams. The artist shows painting, sculpture, installation and performance, as he continues to work in the gallery, interact with visitors and add to the exhibition throughout its run. Through May 26. Mammal Gallery, 217 Mitchell Street. Singer Eva Ayllón, often referred to as Peru’s Tina Turner, performs at the Rialto this week.

Eva Ayllón. The renowned Peruvian singer, often dubbed the “Tina Turner of Peru” and the “Queen of Landó,” performs an Atlanta concert. May 25 at 8 p.m. Rialto Center for the Arts.

John Burke: The Music of Georgia. The Grammy-nominated pianist and composer presents a night of music from the Peach State, from Ray Charles to music from The Walking Dead. May 24 at 7:30 p.m. City Winery. Hamilton arrives in Atlanta this week.

Hamilton. A touring production of the monster Broadway hit arrives at the Fabulous Fox for a two-week, 24-performance run. May 22–June 10. Fox Theatre.

Alliance Theatre on the BeltLine. The Alliance Theatre gives a free preview of scenes from its upcoming family production of Winnie-the-Pooh. May 26 at 10:30 a.m. Historic Fourth Ward Park.

Living on Love. Stage Door presents a new production of Joe DiPietro’s comedy about a famous husband and wife maestro and diva who hire attractive young ghostwriters to tell the story of their lives. Through June 10. Stage Door. EnCore Dance on Film. Core Performance Company presents a collection of original dance works for the screen. May 25 at 5 and 7:30 p.m. Core Studios. Jon Michael Varese, The Spirit Photographer. The literary historian presents his debut novel about a fraudulent spirit photographer at the turn of the century who is surprised to discover he’s seemingly captured the image of a real ghost. May 21 at 7 p.m. A Capella Books.

Larry Smith, Six Words: Fresh Off the Boat. The founder of SixWordMemoirs.com and its bestselling book series explores stories of immigration, identity and coming to America. May 23 at 7 p.m. Carter Library.