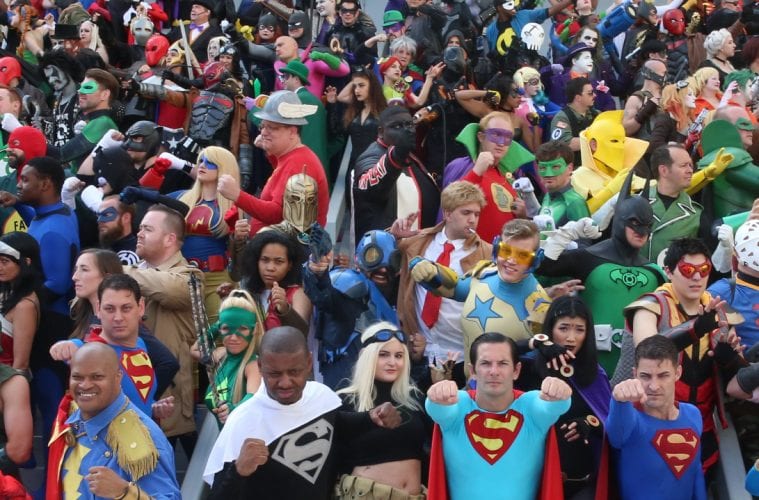 ArtsATL’s guide to making the most of Dragon Con 2018

This Labor Day weekend, an estimated 80,000 people will descend on downtown Atlanta for Dragon Con, the celebrated gathering for fantasy, science fiction, comics, gaming and other pop culture pastimes. Here are some of the best ways to enjoy the event’s wild creativity, from celebrated Timelords and alien divas to Stormtrooper parades and Vulcan beauty queens.

Given the hordes of people at the event, which spans multiple venues across several downtown hotels, you should plan carefully and arrive as early as possible at your highest-priority events. But to have the best possible time, you should also be prepared to throw out your plan when a fun-looking panel, performance or demonstration crosses your path. Be prepared to boldly go where no one — give or take a few hundred other hardcore fans — has gone before. You don’t even have to brave the infamously crowded convention itself or buy a ticket to enjoy one of the weekend’s best events: the Annual Dragon Con Parade down Peachtree Street at 10 a.m. on September 1. The parade features cosplayers from seemingly every film, TV show, game and brand with fandom parading by in a reliably delightful display of geek pageantry. Expect the Feed & Seed Marching Abominable marching band, creatures from Netherworld and the 501st Legion of Star Wars Stormtroopers at the end. Also, look for particularly imaginative examples of costuming — in the marching Periodic Table of Elements, “Sodium” may be represented by, say, the Morton’s Salt Girl. You can see steampunk versions of normally high-tech characters or incongruous pop culture mash-ups like a Hello Kitty Darth Vader.

Even at Dragon Con’s host hotels, the attendees are often the main attraction and enjoy being photographed; just make every effort to be polite and make way for foot traffic.

Dragon Con is famous for its Walk of Fame autograph sessions and panels for sci-fi celebrities and other media luminaries. Perhaps the marquee name for 2018 is Scottish actor Peter Capaldi, who recently completed three seasons as The Doctor on Doctor Who. His work stands out even in the BBC’s science fiction show’s 55-year history, but Capaldi would also be a draw for his storied career as a character actor, notably as Malcolm Tucker, a volcano of political profanity, in The Thick if It and In the Loop.

The event attracts so many personalities that you’ll probably find someone in attendance with a connection to almost any childhood or current favorite show or franchise you can name. Fans of the Atlanta-shot films in the Marvel Cinematic Universe may be interested in appearances by Karen “Nebula” Gillan, Pom “Mantis” Klementieff, Evangeline “The Wasp” Lilly and Benedict “Wong” Wong. (Yes, his character is also named Wong.) And the guests are not all actors: you can get behind-the-scenes artistic perspectives from the likes of Riki “Riddle” Lecotey, a specialty costumer on Avengers: Infinity War. Big names abound, but some of the best events are under-the-radar, like Crossed Swords’ demonstrations and performances. (Courtesy Crossed Swords)

The most underrated attractions, but among the event’s best, can be the performances. Groups like Crossed Swords offer demonstrations of stage combat and cinematic fight choreography, from traditional rapiers to Klingon weapons. Locally based musicians on the lineup include the Atlanta Swing Orchestra, funk/soul group Gurufish, “prog-pop rockers” the Extraordinary Contraptions, DJ The Black Amigo and Metalsome’s live rock band karaoke.

Other shows include The Atlanta Radio Theatre Company, which has performed live radio-style shows at every Dragon Con since its inception. Atlanta’s Lips Down on Dixie and the Evil League of Evil put their own creative spins on the songs of Rocky Horror Picture Show and Dr. Horrible’s Sing-Along Blog, respectively.

In addition to the convention’s juried art show, the Comic & Pop Artist Alley features more than 200 illustrators, sculptors, painters, writers and other artists. The Dragon Con Awards Banquet at the Hyatt International Ballroom on September 1 will include such honors as the 20th-annual Julie Award for the genres’ leading luminaries, the Eugie Foster Memorial Award for Short Fiction and the Hank Reinhardt Fandom Award for a Georgia writer, artist or fan.

On August 30, in conjunction with Dragon Con, the Center for Puppetry Arts hosts The Dark Crystal Ball, a fantasy masquerade and dance that coincides with its exhibition Jim Henson’s Dark Crystal: World of Myth and Magic. In addition, the Center presents the National Puppet Slam for audiences 18 and up from August 31 to September 2.