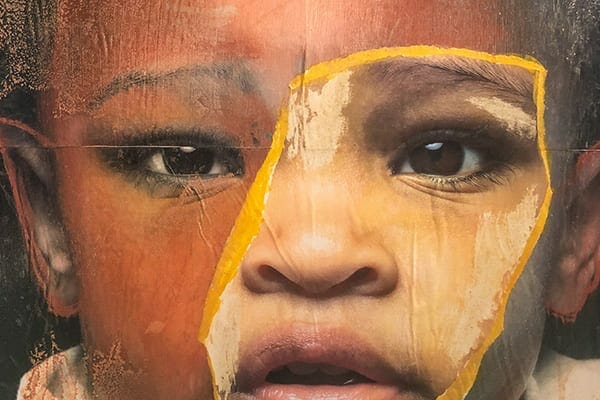 A photo-based abstraction from Earvin A. Johnson titled "#InHonor: Monoliths," seen at Arnika Dawkins Gallery in 2019.

Arnika Dawkins has been named the 2020 Focus Awards Rising Star by the Griffin Museum of Photography in Winchester, Massachusetts. Dawkins is the owner and director of the Arnika Dawkins Gallery in the Midwest Cascade neighborhood of Atlanta. The Rising Artist Award, according to the museum, is given to an emerging force in the photographic community. The Focus Awards recognize individuals making critical contributions to the promotion, curation and presentation of photography. They’re not meant for art-making but for photography educators, historians, gallerists, writers, curators, inventors, conservators and administrators who elevate the medium.

Arnika Dawkins Gallery specializes in photographic images by and of African Americans. “I think artists are dialed to another level of sensitivity,” Dawkins says. “It’s another way that we communicate. I’m privileged to show artists that have something significant to say.”

Variations on a Theme, the newest series from Atlanta artist Earvin A. Johnson, recently ended its virtual run. It was a nod to the technical influence of jazz and how the genre reflects the life experiences of Black people.

B.L.A.C.T. ATL is seeking submissions for its inaugural –– and virtual — We Reel BLACT short-film competition. The submission deadline is November 30. Winning films will screen December 6–8 on the We Reel BLACT website. Organizers say the event is where Atlanta’s theater and short-film communities intersect. In addition to being a competition, the event will celebrate films from Black artists about Black experiences in metro Atlanta. Cash prizes of $1,000, $600 and $400, respectively, will go to the first-, second- and third-place finishers.

To enter, you must be a Black filmmaker/creator based in Atlanta or the Southeast and your film must be less than 10 minutes. Make your submission via the website. Submissions will be judged by Keith Arthur Bolden (Lovecraft Country), Jason Louder (Black Lightning) and Margo Moorer (Queen Sugar).

Email wereelblact@gmail.com with any questions. Brandall C. Jones, connectivity director at True Colors Theatre Company, has been chosen as one of 12 participants in the Southern pilot of Emerging Leaders of Color, a professional development and networking opportunity for arts and cultural workers of color.

The program is run by the Atlanta-based nonprofit South Arts, which believes that art elevates the region, increases connectedness and inspires meaningful change. South Arts partners with the National Endowment for the Arts and state arts agencies in Alabama, Florida, Georgia, Kentucky, Louisiana, Mississippi, North Carolina, South Carolina and Tennessee. It offers artist grants and fellowships, community and organization grants, and programs and conferences.

Jones is the only Georgia administrator chosen for the 2020-21 cohort program. The cohorts will convene online for three days in December to network and develop their skills. They also will network with cohort alumni. Atlanta author Sergio Delgado Moya has earned a $50,000 Andy Warhol Foundation Arts Writer Grant that will enable him to finish his book An Archive of Violence: The Obscene Visuality of Sensationalism.

Moya, an associate professor of Spanish and Portuguese at Emory University, is the author of Delirious Consumption: Aesthetics and Consumer Capitalism in Mexico and Brazil (2017) and coeditor of Conceptual Stumblings, a volume on experimental art in Chile (2019).

His new book will make a case for sensationalism as a specific kind of violence that falls on marginalized populations marked by gender and class, race and ethnicity, dispossession and sexuality. Moya is one of 22 grantees for 2020.