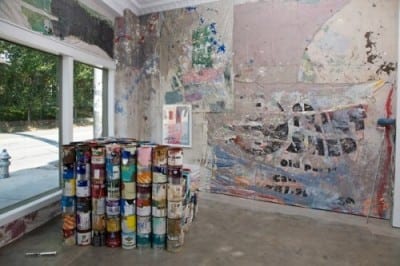 Review: Paint as medium and message in Douglas Weathersby’s show at Solomon Projects

If you wandered into Douglas Weathersby’s installation at Solomon Projects, you might think you had encountered the lair of a very obsessive contractor steeped in self-awareness about his work and anxious to the point of neurosis about the technicalities of paint. “Environmental Services: Paint Shed Showcase” is a shrine and monument to paint, both the Ralph Lauren seafoam you dredge your kitchen in and the dribs and drabs that transform the quotidian ooze into a $15,000 art object.

“Environmental Services” is composed of the remnants of a performance piece Weathersby did as part of a 2010 Flux Projects commission. (Environmental Services is also the name the artist goes by.) In the months before that performance, Weathersby, who lives in Boston and was educated at the Atlanta College of Art, drove his white van around Atlanta collecting discarded paint from homeowners for use in his project. With 400 gallons at his disposal, Weathersby — er, Environmental Services — poured those paint remainders down the sides of a shed draped in tarpaulins in an Atlanta parking lot. The piece combined a conceptual thrust (artist making art) with the trappings of something “real”: a guy seemingly engaged in the business of doing something with tarps and paint in a methodical way, though what that “something” was may not always have been clear to passers-by. 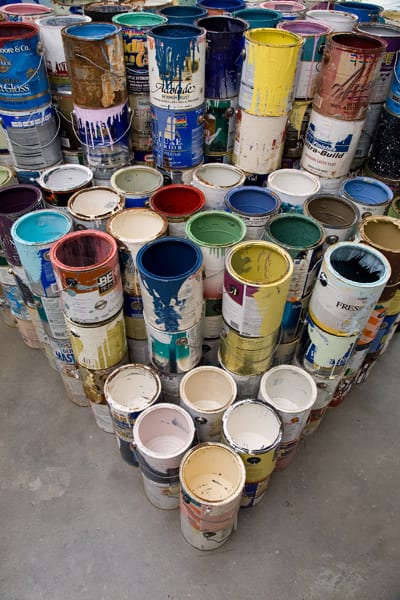 “Paint Shed Showcase” is conceptual art followed through to the bitter end, from planning to execution to this last-hurrah installation. The gallery’s front room looks like a show in process, which is appropriate because process — known in more pedestrian, non-artistic terms as “work” — is very much what Weathersby is about. In addition to conceptual projects such as “Paint Shed Showcase,” he is a handyman and gun for hire, and so the boundaries between “performing” work and actually “doing” work (which is broken down by cost at his website) are wonderfully fuzzy. At its heart, his work examines the notion of self-definition, a key component of the American character. If you say you are an artist, then you are. If you say you are a conceptual artist doing a “project” about cleaning someone’s basement, then you are. It’s a neat philosophical trick that both ennobles real work and shows the degree of labor involved in art-making. I believe that’s known as a win-win. 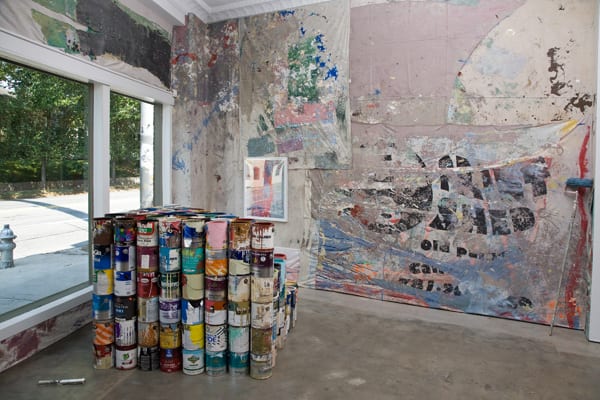 In Weathersby’s Solomon show, paint-splattered tarps adorn the walls, a triangular stack of empty paint cans in a kaleidoscopic variety of colors dominates the entrance, and a paint roller on a long handle leans against the wall like a wallflower waiting to be picked for the next dance. The subject, it’s fairly undeniable, is PAINT. You’d really be a fool to miss it, though off-the-street viewers may be a little mystified by the considerable unpacking that would be involved in appraising this show if you didn’t already have some understanding of Weathersby’s work. The show may read as a bit too one-note for conceptual-art types and a little too heady and opaque for non-art types. Hopefully they will visit the gallery at the same time and hash things out together. 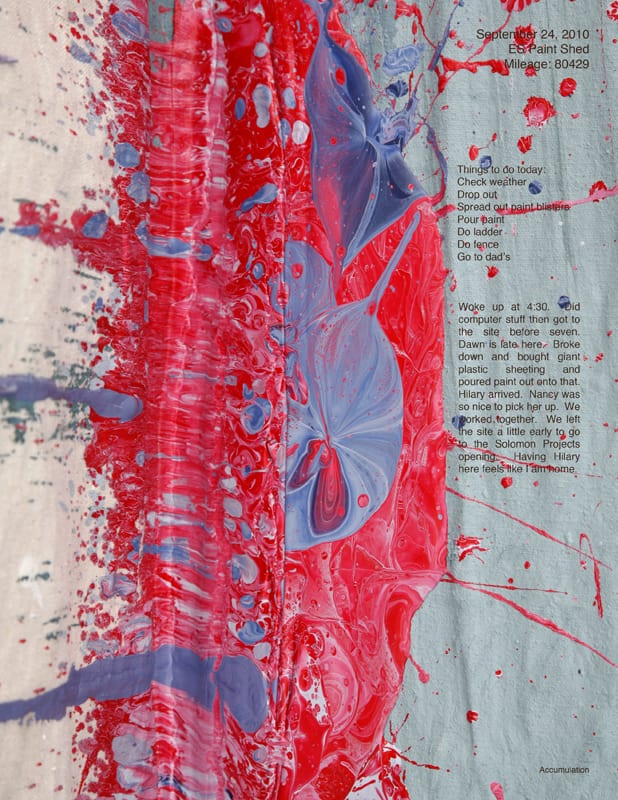 In addition to those splattered tarps, for the past two years Weathersby has kept a daily log with photographs of his activities. Eighty-eight of those 8.5-by-11-inch log pages are tacked up along the wall of the gallery’s front office, supplemented by larger blow-ups of selected pages throughout the gallery space. The logs detail each day’s mileage, meals eaten, people seen, University of Georgia games watched. There are photos of the bed Weathersby slept on when he took up a month-long residency at Solomon Projects gallery while preparing for his Flux performance and of his trusty white van inscribed with the neon-orange, very DEVO-ish “Environmental Services” logo. In his logs, he offers a self-portrait of an obsessive, slightly anxious (“The resultant paintings are, well, I want them to be amazing”), lovable kook who keeps methodical to-do lists and often experiences the world via his stomach in classic Southern style. Lunch looms large in Weathersby’s world. 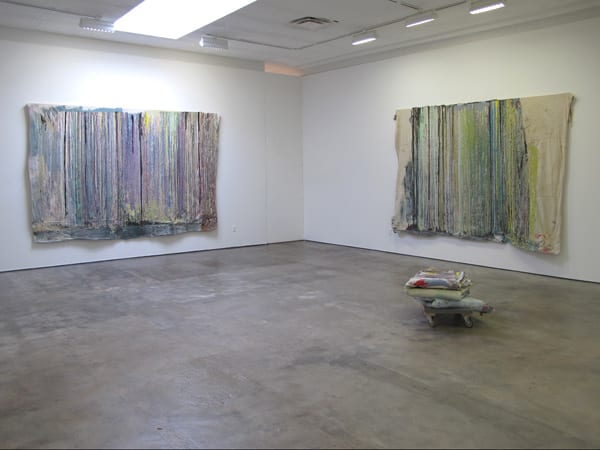 The second gallery space is devoted to Weathersby’s tarpaulins consumed by lines of dripping, coagulating paint, like Jackson Pollock ruled by the forces of gravity and Sherwin-Williams (photo above). Though it seems that these “paintings” might be the outcome of the process, in fact the process is the art to an equal extent. A pile of paint-soaked tarps are neatly folded on a dolly as well. Those with an interest in painting — the kind that shows up in galleries and the kind that happens on your living room wall — will find food for thought for either strain in this quirky, nicely oddball show.