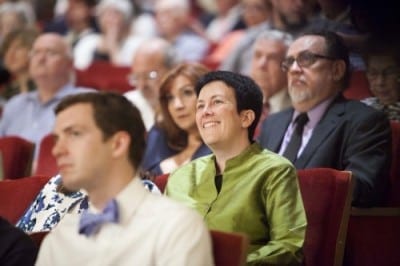 A few months ago, it was touch and go whether the Atlanta Symphony Orchestra would reach its goal of performing 10 new fanfares across the 2010-11 season, commissioned to celebrate Robert Spano’s decade as music director.

This weekend, the penultimate week of the season, Spano and the ASO delivered fanfares No. 9 and 10. They’re among the best of the bunch, deserving of repeat performances. They were part of a complicated program, surrounding another world premiere, James Oliverio’s “Dynasty” Double Timpani Concerto, and Alvin Singleton’s “After Fallen Crumbs.” Rachmaninoff’s “Symphonic Dances” closed the evening. In all, a dense, disconnected yet curiously satisfying program.

Jennifer Higdon’s three-minute fanfare is called “TenFold” and was co-commissioned by Georgia Public Broadcasting, celebrating its 50th year. It’s being recorded and will be used as on-air theme music. In good historical fashion, “TenFold” is scored for just brass, horns and percussion. It opens with bright flourishes accented by percussion strokes, with restless energy, familiar gestures and nifty new sounds. It ends with a bang. Like a lot of Higdon’s music, it is both rousing and comforting and colors perfectly inside the lines.

Olli Mustonen, from Finland, is better known as a brainy and passionate pianist — he performed the Ravel concerto with the ASO in 2009 — than as a composer. But his three-minute “Fanfaari” was among the most original and interesting fanfares of the entire set. It combines a lilting beat, a steady pulse, a wind-up, toy-shop playfulness and lace-like filigree from the violins. Mustonen, alone among the ASO commission recipients, found a successful new path into an old genre.

The big new work, James Oliverio’s “Dynasty” Concerto, was commissioned by two brothers: the ASO’s principal timpanist, Mark Yancich, and Cleveland Orchestra principal timpanist Paul Yancich, and the ASO was offered the world premiere. (For a little background on the concerto, click here.) Each of its five movements finds a different mood, almost as character studies. The visual component, with those beautiful copper kettledrums and the virtuosic brothers, their arms a blur of motion, was a strong element in its success.

The opening, “Impetuous” — another fanfare of sorts — is bold, extroverted and very appealing. Timpani thundered. Brass blasted. (And several ASO musicians sported small white earplugs.) In the second movement, the combination of alto flute, English horn and two harps create a pastoral setting. An endearing, long-limbed melody is spread across the two soloists. The composer gave himself the materials for something wonderful, but reached only for the obvious and lapsed into sentimentality.

The timpani-only “Interlude” at first sounded like giants thumping along in the forest. When their heavy footsteps quickened and lightened, it was impossible not to imagine a little dance between the titans. “Ancestors Within” evokes the Old Country with a folk fiddle tune (played by concertmaster David Coucheron).

In the finale, a nimble theme inches along, elaborated upon by the soloists and the orchestra, gaining in intensity. Brief solo cadenzas for each brother, with arms striking in all directions, octopus-like, were raucous highlights of the work. The audience seemed to hang on to the concerto moment by moment and ate it up at the end with an enduring standing ovation.

Alvin Singleton’s “After Fallen Crumbs” was premiered (and recorded) by the ASO in 1987, when the Brooklyn-born composer moved to Atlanta as composer-in-residence. He’s still here. “Crumbs” is fanfare-ish and bold in its own way, but it’s also angry, sensitive, spare, beautiful, abstract, “modern” and yet confessional. Its six minutes are packed with content, none of it properly explained. The bleak ending, with pulsing and leaden violin chords, raises more questions. On this program of celebrations and triumphant endings, it was the lonely outsider.

After so much new and unfamiliar music — all of it given committed, tight performances — Spano and the orchestra closed with a Rachmaninoff score that they’ve played several times in recent seasons and have recorded for the new ASO Media label, to be released this fall. The “Symphonic Dances” is a Spano specialty — lucid, taut, emotionally neutral yet intense. His interpretation hasn’t changed much since the last time they played it, but the sound of the orchestra has become so lovely that it qualified as the most rewarding ASO performance.