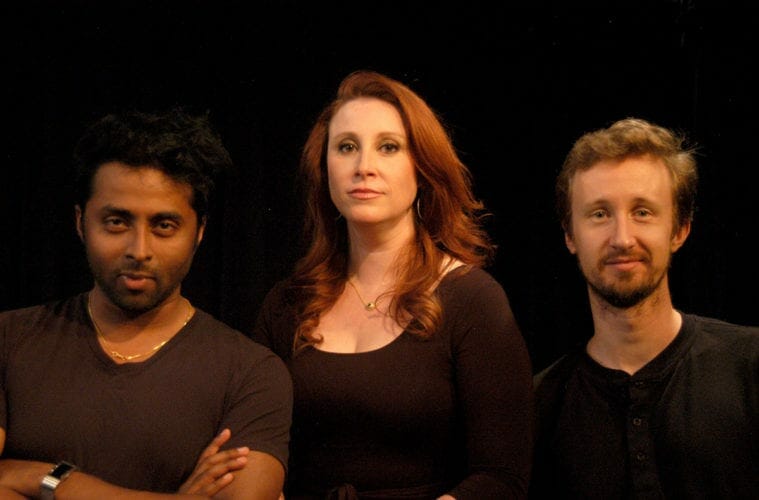 Tamil Periasamy (from left), Erin Greenway and Chris Schulz in The Bear. (Photo by Judy Thomas)

Chekhov described the first play, The Bear, as a “joke in one act” and a “farce-vaudeville.” The Arís performance does not disappoint. Hilarious and over-the-top, The Bear tells the story of Elena (Erin Greenway), who’s decided to mourn for the rest of her life to make her unfaithful husband feel guilty in his grave. Her vigil is interrupted by the neighbor, Gregory Stepanovitch Smirnov (Tamil Periasamy), who demands that she pay her late husband’s debt.

Gregory is crazy, immediately getting drunk off her vodka when she refuses to pay him. He then makes himself at home by flinging his boots and jacket around the room. Periasamy gives the night’s standout performance, with high energy that never falters. His outrageous, drunken antics make him ridiculous and funny.

The widow’s frail old manservant (Chris Schulz) is thrown into a tizzy by Gregory’s brash manners. Elena’s fiery reactions to Gregory’s nonsense fuel the delightful banter that pushes through until the play’s explosive ending. The whole thing left me chuckling into intermission. Christina Leidel and Eric Lang play two married people having an affair in The Yalta Game. (Photo by Judy Thomas)

The second play is much different in tone. The Yalta Game details an affair between two married people. It begins with Dmitri (Eric Lang), a gossipy and imaginative man people-watching while on vacation in Yalta without his wife and children. There he meets the lovely and also married Anna (Christina Leidel). The two play the “Yalta game,” in which they make up stories about the people around them as they tour the region. They grow closer until their relationship becomes a full-blown affair, which continues even after their  travels end.

Their story is told mostly through monologues to the audience. We’re told how they feel about events we do not see and, therefore, never quite feel their relationship build. This style of storytelling makes their love seem fake. Dmitri’s monologues, especially, feel as though he has no remorse for his actions and uses the excuse of love to justify them.

Anna’s extreme guilt makes her more sympathetic but also makes Dmitri seem even worse because it’s clear he has no intention of leaving his family for her. The Yalta Game is presented as an epic, passionate love story, but in an uncomfortable that reminds us how scummy human beings can be.

The evening as a whole is well-executed. The women look divine and the men dapper in costume designer Joan Cooper’s swooping gowns and suits. The actors, under dialect coach Kathleen McManus, deliver impeccable and clear Irish accents. This adds to the universality of the stories since the original text and scripts come from such different cultures. Although barely connected, each act of The Friel Deal gives heart and Irish soul to Chekhov’s work.