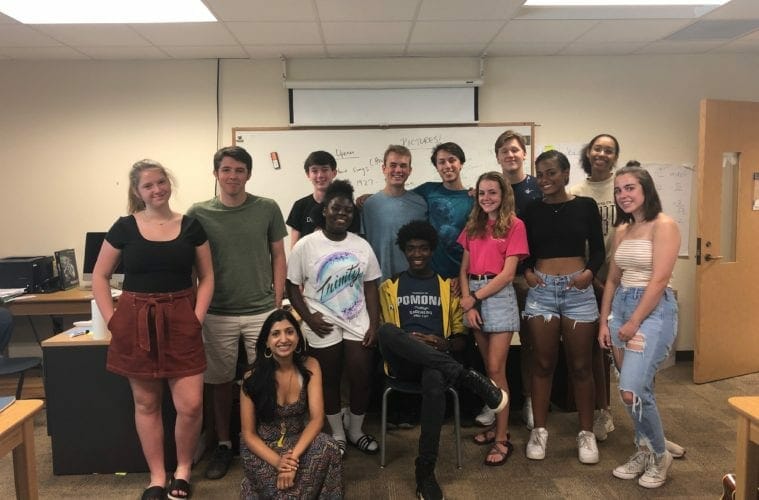 Anita Aysola is a singer and self-taught songwriter whose evolution as a professional musician was laced with self-doubt. Despite her classical training as a pianist and her equally extensive education in Indian classical music, the Michigan-native lacked a template for expressing herself lyrically and concluded that she had nothing to say. All that changed in 2011 when she was accepted into a songwriting workshop taught by Jeffrey Steele, a Grammy-nominated country singer-songwriter.

“Jeffery was so positive and optimistic,” Aysola says. “He made us feel like we should keep trying. He encouraged collaboration as a means of getting unstuck. He told us there was no magic bullet for writing a song. And he stressed that the biggest gift an artist or songwriter can get is time.”

In time, Aysola realized she’d had a lot to say all along.

Today, she is a math teacher at The Paideia School in Druid Hills, a private K-12 institution, where Steele’s wisdom informs her approach to instructing children in the classroom and building their confidence as artists. In the process, she’s also figured out a way to integrate her musical interests and get her kids in on the act. Literally. Anita Aysola takes the stage of Eddie’s Attic on June 2 accompanied by several of her songwriting students. (Photo by Tiffany Walling McGarity)

When Aysola takes the stage at Eddie’s Attic this Sunday, June 2, for In the Round: Magno, Anita Aysola and Kevin So, her opening set will feature 12 Paideia students performing music they wrote and composed during a month-long intensive songwriting course Aysola has offered for the past two years.

Classes meet five days a week for two hours per day. There is no audition process, but students must demonstrate proficiency instrumentally or vocally. The forum is intended for kids who are musically inclined and creative but not necessarily inspired to participate in traditional extracurricular activities like high school chorus, orchestra, musical theater or jazz band.

“I was instantly taken to another place,” he says. “I felt something deep down inside that I’d never felt before when listening to artists like [Dutch DJs and record producers] Martin Garrix and Tiësto. This was the start of music being a release. Being lost in my own head and being OK with that.”

While Draper experienced music as a liberating escape, learning to express his doubts as a songwriter didn’t come as naturally.

“I’ve studied a little music theory, but I don’t play an instrument and didn’t think I could take Anita’s class, because I’m not a classically trained musician,” he says. “I also don’t usually like to ask for help, because I don’t want to feel weak. But when I go to Anita for help with a melody, lyrics or chord progressions, she’s understanding and accepting. I don’t feel ashamed . . . I feel included. I feel at home.” Sixteen-year-old Jetta Strayhorn says that Aysola’s gift for individualized instruction is her superpower.

“Anita’s feedback is so personal,” says Strayhorn, a vocalist and guitarist. “I know she’s really listening and not giving cookie-cutter guidance or teaching a curriculum that’s already been taught a billion times. Being in this class has taught me to accept feedback [whether writing or developing melodic or lyric concepts] but to not overthink what other people have to say, because it can stop you from being the artist you were meant to be.”

Paul Zollo’s Songwriters on Songwriting is the only required reading for Aysola’s class. An industry bible, the book shares insights on the enigmatic practice of making something out of nothing from icons like Bob Dylan, Carole King and Lenny Kravitz.

Canadian singer-songwriter, poet and novelist Leonard Cohen once said of the process, “If I knew where the good songs came from, I’d go there more often. It’s a mysterious condition. It’s much like the life of a Catholic nun. You’re married to a mystery.” But Aysola helps demystify songwriting by inviting Atlanta-based practitioners — including Ruby Velle, Sam Burchfield and Michelle Malone — to connect with the kids, offer feedback and inspire them to stay on course. Waiting on the muse might work for some. But more often than not, songwriters need structure to lift ideas off the ground. Aysola covers the building blocks of writing verses, choruses, bridges, intros and outros, chord progressions, time signatures, lyrical hooks and melodic hooks. And because experience has taught her that great songs can stem from great titles, she challenges students to mine song titles by combing newspaper and magazine headlines and content. Fifteen minutes later, the air crackles with excitement as kids call out potential titles like “Oklahoma Storm,” “Listen,” “The Marathon Continues,” “Dear Reader,” “Calm Chaos” and “Rising Tension.”

When Mignonne “Minnie” Breaux came to a recent class, the 15-year-old said two lines and a melody kept looping in her head. She became shy and tentative before slowly opening up when Aysola asked what triggered her thoughts.

“I don’t know,” Breaux said. “Two years ago, my friends dropped me for no reason and didn’t tell me why. I don’t care anymore. I don’t want them back. I just want to know why.”

“Everything you’re saying out loud can be converted into lines,” said Aysola, who didn’t hide her enthusiasm. “Start writing from that place of I wanna know why. That is verse material and will resonate with so many people on so many levels. It takes me back to dating when guys would break up with me with no explanation and I was like, Why don’t you just man up and tell me the truth?”

Thirty minutes later, Breaux reemerged with a full song but was only willing to take partial credit for the breakthrough. Aidan Walsh-King, a ninth grader who is as unassuming in a crowd as he is commanding when on the guitar, says he hopes kids who might not have access to classes like Aysola’s remember that they were born with what it takes to be an artist.

“I think it’s great to use all the resources you can get, but it’s also really important to remember that a lot of musicians were self-taught,” he says. “Understand that you’ve got most of the resources for writing music already in your head. It’s really just a matter of figuring out what you want to say and keep trying until it works out.”