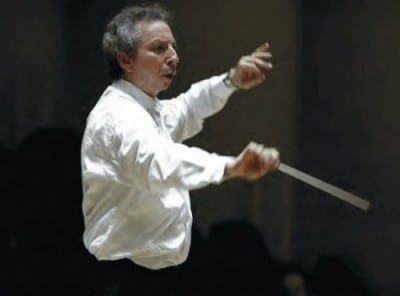 The future of the Atlanta Opera might look different from its recent past, thanks to the official arrival of conductor Arthur Fagen as music director.

The announcement was made this week by the opera’s general director, Dennis Hanthorn. It’s the latest in a series of recent administrative changes for the 31-year-old company, which has been on an artistic roll but is struggling financially and still doesn’t have a strong profile in the Atlanta metro region.

Fagen is booked to conduct two productions each season starting in 2011-12. The New York-born conductor will also help Hanthorn in several key areas: casting singers and stage directors, dealing with the orchestra (who are contracted free-lancers) and helping coordinate co-productions with other opera companies. And it’s a given: he’ll help with fund-raising, too.

“Since I arrived at the Atlanta Opera it has been one of my goals to hire a music director to help build the Atlanta Opera Orchestra,” Hanthorn said in a statement. “I am thrilled that Arthur will be joining my artistic team. His vast experience as an opera and orchestral conductor combined with his leadership and artistic abilities will undoubtedly enhance the quality of future Atlanta Opera productions.”

At 59, Fagen’s eclectic repertoire, cosmopolitan tastes and career at some of Europe’s more innovative opera houses — especially Germany’s theatrically radical Dortmund Opera, where he was music director — might help steer Atlanta onto a more open-minded path.

“The artistic growth of the Atlanta Opera since Dennis arrived has been very exciting,” Fagen said, reached in Italy, where he’s currently conducting orchestral concerts at the Bolzano Festival. The Atlanta Opera is “really set for more success, and I do think they can go a step further in being a bit more progressive.”

Fagen has conducted more than a half-dozen productions at Milwaukee’s Florentine Opera, which Hanthorn led before coming to Atlanta in 2004. It was Fagen who conducted the first Atlanta Opera production assembled by Hanthorn: a “La Traviata” in October 2005, at the Civic Center, which set a new high-water mark for quality. Since then, the company has grown steadily each season.

And since that “Traviata,” Fagen has been the opera’s de facto music director, the go-to conductor for milestone productions: “Turandot” (which opened the Cobb Energy Performing Arts Centre in 2007); “Cold Sassy Tree” and “Akhnaten” (the company’s only forays into contemporary opera); and, most recently, “The Magic Flute.”

That “Magic Flute” was engineered as a co-production with Indiana University’s high-powered Jacobs School of Music, where Fagen is on the faculty. (Lower photos show Fagen conducting the Atlanta Opera’s “Magic Flute” in April 2010. Photos by Tim Wilkerson.) But the Atlanta Opera is in a financial hole. Donations and ticket sales have been down almost 20 percent, and it scaled back the coming season from four productions to just three. There’s no recovery in sight.

“This came about very suddenly,” said Fagen of his own appointment. “Although Dennis and I have been talking about it for years, I’d started to think it would never happen. It’s only been in the works in recent weeks.”

Since he arrived in Atlanta, Hanthorn has spoken about how he likes to work with a partner. (In Milwaukee, it was conductor Joseph Rescigno.) Mitchko’s departure left a huge gap.

Rather than hire a new artistic administrator, however, Hanthorn reallocated that position’s salary by dividing Mitchko’s duties among other staffers. (He earned $97,492 in 2008, according to IRS 990 tax forms.) Finance director Paul Melroy was promoted to the newly created post of managing director, thus giving Hanthorn more time for artistic matters. The bit that requires the most operatic expertise — scouting singers, directors and rentable productions — will be shared by Hanthorn and Fagen. As a conductor, Fagen is a colorist, bringing out a spectrum of tonal qualities from the orchestra while breathing expertly with the singers. I’ve been a fan since that first “Traviata.” Although he sometimes lacks the visceral charge and epic sweep that major international maestros can deliver, Fagen paces everything organically, with insight and sensitivity. He conducts Italian opera with lightness and finesse. An intense and well-paced “Flying Dutchman” proved that he’s also a solid Wagner interpreter. And he’s won praise for recent recordings of underrated Czech composer Bohuslav Martinu’s music. It’s too soon to know how the restructuring of the Atlanta Opera will operate, or whether it will succeed, or how long it will last. For his part, Fagen dreams of Atlanta one day performing eight productions a year and having the orchestra perform a few symphonic concerts on stage. This would finally put Atlanta in league with what opera companies in its peer cities — Dallas, Houston, Seattle — achieved many years ago. What the Atlanta Opera has always lacked is a clear institutional identity that the city and region can rally around and support.

But in these times of national economic crisis, Fagen also says he sees great value in the venerable European model, with a city’s opera, ballet and symphonic orchestra all under one umbrella organization. “It’s a huge savings, with one administration and one board of directors,” he said. “The enormous problem would be [loss of] jobs for the orchestral musicians if the same 100 players were in both the opera and the symphony orchestras.”

(Interestingly, the Atlanta Symphony Orchestra’s new president, Stanley Romanstein, told me a few months ago that he’d been talking with Hanthorn and Atlanta Ballet’s Arthur Jacobus to discuss this very idea. “Can we [the ASO] collaborate with the opera and ballet to enhance the audience experience?,” Romanstein asked. “Is there a cost savings to share, since we all need an orchestra?”)

Another of Fagen’s ambitions is for Opera in the Park. “It would be great if the company had a year-round presence, maybe outdoor performances at a summer music festival. I don’t think Atlanta has a big summer festival. Wouldn’t that be great?”