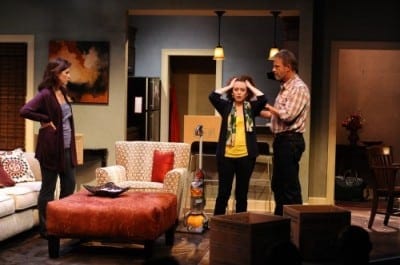 If you’re not squirming while watching Janece Shaffer’s new play “Broke,” you’re not paying attention, either to the drama itself, the world outside or both. Inspired by the Great Recession, Shaffer chronicles the disintegration of an upper-middle-class family with a seemingly blissful, if somewhat materialistic, life as they slowly lose everything. “Broke” is so timely, so perfectly observed and so harrowing that it is likely to be painful for audience members who have been laid off or suffered economic reversals during the past three years.

Painful doesn’t equal bad, though — Eugene O’Neill, anyone? — and “Broke” is powerful, powerful theater. But you have been warned. Shaffer’s fourth play is having its world premiere on the Alliance Theatre’s Hertz Stage through October 23. For tickets, click here. Elisabeth Omilami as Evalyn and Tess Malis Kincaid as Liz

Liz (Tess Malis Kincaid) and Jonathan (James M. Leaming) Eliason have what looks like a great life and marriage. She’s a high-level marketing executive pulling down $350,000 a year; he owns his own little shoe store, which doesn’t bring in much but makes him happy. Daughter Missie (Galen Crawley) is a child of privilege and a student at NYU. The couple seem a bit mismatched — she’s as tight as timpani drums, he’s a weak but kindhearted man, willing to let her be the alpha dog and breadwinner — but we all know couples like that who make it work.

But as the curtain rises, Liz has just been laid off with no warning. She puts on her warrior face and gets busy networking for her next job; Jonathan, oblivious to her hidden despair, sees it as an opportunity for her to take a break, live off their investments, maybe study Italian like Elizabeth Gilbert in “Eat, Pray, Love” or even apply to go on “Survivor.” The next blow is more severe: Liz’s former company suddenly collapses and, with it, all the company stock they owned — their entire savings. (Wouldn’t a smart cookie like Liz have learned something from Enron?)

The Eliasons’ initial whistling in the dark starts to get a little fainter, their arguments a little louder. As they cut back on expenses, they blame each other for their years of indulgent spending that have built a life they now can’t sustain.

“No more Bloomingdale’s!” Jonathan rails at her.

“No more REI!” Liz fires back. That’s one of many exchanges that show how perfectly Shaffer weaves the status details of contemporary upper-middle-class life into a middle-aged marriage, making them inseparable. Shaffer’s eye for the affluent lifestyle is keen, from Jonathan’s love for Whole Foods Market and bicycle rides (complete with ridiculous pseudo-Italian skin-tight riding outfit) to Liz’s shiny Macintosh laptop computer and Christian Louboutin red-soled pumps, the perfect accessory for that must-nail job interview. The $400 Dyson vacuum cleaner, the $90 Rabbit corkscrew: Shaffer knows exactly how these people live and how much it cost them (in every sense), and I was reminded of the same attention to detail that Tom Wolfe crammed into his novels “The Bonfire of the Vanities” and “A Man in Full.”

But “Broke,” which is directed by Jason Loewith, is like “The Price Is Right” in reverse, as Liz and Jonathan’s bank balance sinks and they slowly lose all their wonderful goodies. The set, by Jack Magaw, starts out stuffed with bourgeois status symbols, then is slowly stripped in full view of the audience by silent stagehands during scene changes. The little cracks in the Eliasons’ marriage that had been spackled over get bigger; the sarcasm gets a little less subtle. As they fall apart, Missie comes home from NYU and, horror-stricken at her parents turning into George and Martha from “Who’s Afraid of Virginia Woolf?,” asks them what happened. Tess Malis Kincaid as Liz, Galen Crawley as Missie and James M. Leaming as Jonathan in the Alliance's world-premiere production of "Broke."

“We knew how to be happy under a very specific set of circumstances,” Liz tells her daughter, one of Shaffer’s many lines that cuts like a knife. Knowing the Eliasons, it’s probably a Wusthof Classic knife.

There’s also a subplot that almost doesn’t work, but barely does, involving Evalyn (Elisabeth Omilami), a sunny but annoying volunteer worker who insinuates herself into their lives, in a plot twist taken directly from Kaufman and Hart’s classic “The Man Who Came to Dinner.” The character verges on being the Wise, Truth-Telling Older Woman of Color, but Omilami believes in her so much that she just steamrolls any objections. (Strangely, “Broke” makes a big deal about Evalyn being Puerto Rican, while Omilami, the real-life daughter of civil rights leader Hosea Williams, and who runs the Hosea Feed the Hungry and Homeless program, is clearly African-American. Oh, well.)

Speaking of steamrolling, Tess Malis Kincaid is no stranger to dominating Atlanta stages; she’s been doing it for years all over town. But rarely has she had a role so perfect for her gift. Liz is one of those convergences between a writer’s vision and an actor’s voice that feels completely organic. Liz doesn’t seem written; she seems to have been alive for 52 years, and we only now caught up with her.

There’s a lot of humor in “Broke,” although it’s certainly not a comedy. If anything, the whipsawing between the funny scenes and the mounting anger and stress heightens each. Shaffer is a playwright of formidable gifts, and in “Broke” she has created a play that evokes deep anxieties and commands serious respect.