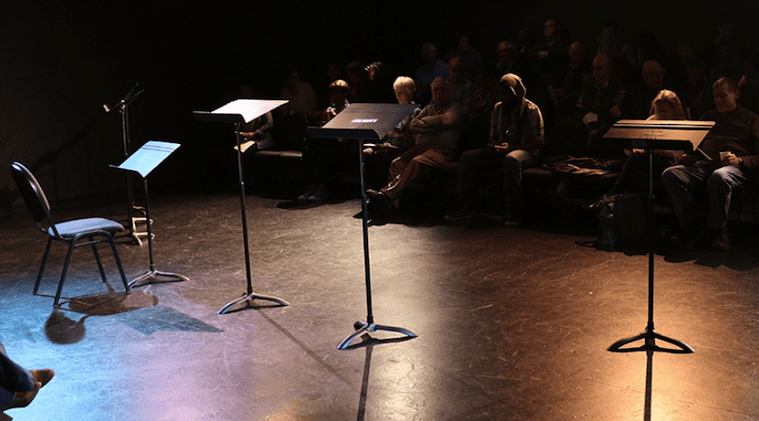 Unkindness, by playwright Logan Faust, is one Southerner’s attempt to reconcile the destructive and redemptive elements of our myriad, modern-day interpretations of faith.

Inna Tsyrlin’s Stitched With a Sickle and a Hammer introduces a political prisoner named Aleksandra who, as part of the camp’s theater troupe, must help Soviet authorities disguise the camp’s existence for visiting Americans.

The Alliance Theatre planned to showcase these plays and playwrights — all 2020 finalists in its one-of-a-kind Alliance/Kendeda Graduate Playwriting Competition — in a weeklong event dubbed the Festival of New Works. Then Covid-19 hit, and those plans were shelved. The annual Kendeda readings are usually standing-room-only.

Undeterred, the theater is now preparing for what it calls its Virtual Play Club series. All four scripts are available to read now through April 24. Beginning April 16, you’re invited to live virtual meetings with the playwrights to discuss each script. The series will culminate with an Artists Roundtable moderated by Rachel Karpf, formerly artistic producer at WP Theater in New York City. The roundtable will feature the four Kendeda finalists as well as Atlanta playwrights Kimberly Belflower, Steve Coulter, Mark Kendall, Mary Lynn Owen and Will Power.

Everything is free, but RSVPs are required, so that the live links can be emailed to participants.  Here’s the lineup:

4 P.M. THURSDAY, APRIL 16. Unkindness, with playwright Faust and director Matt Torney (soon to take over at Atlanta’s Theatrical Outfit). The playwright is from New York University’s Tisch School of the Arts.

4 P.M. THURSDAY, APRIL 23. Monster, with playwright Geyer and director January LaVoy. Geyer is from the University of California San Diego.

4 P.M. FRIDAY, APRIL 24. Stitched With a Sickle and a Hammer, with playwright Tsyrlin and director Lauren Morris. Tsyrlin is from Ohio University.

The Kendeda competition, envisioned as a bridge from graduate school to a professional career, solicits plays from the leading M.F.A. programs in the United States. After a rigorous selection process, one winning play and four finalists are chosen.

This season’s winner, 53% OF by Steph Del Rosso of the University of California San Diego, was to begin previews March 28, open April 2 and run through April 19. That production is now in limbo.