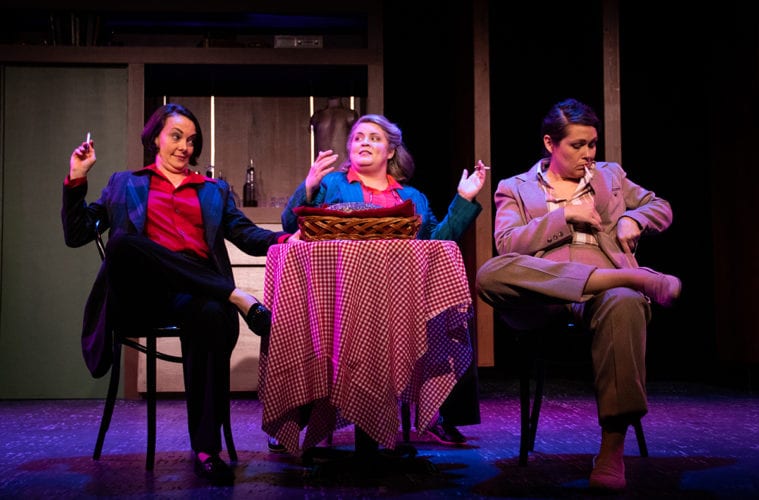 Dad’s Garage Theatre Company is known as the home of improv in Atlanta. And if you’re looking for a fun night of dark adult humor, it’s the spot for you. Ad Nauseam is its latest original show, based on AMC’s Mad Men. Ad Nauseam follows last season’s Black Nerd as Dad’s Garage’s latest original play, written and directed by staff member Megan Leahy, and it proves to be more of a niche show than its predecessors.

Ad Nauseam is set in a 1960s advertising company on Madi-daughter Avenue that’s run by Mad Women. The show in its writing is best when it’s either making puns or parodying societal standards but falls flat everywhere else. From Sleeping Handsome to Aston Martha, Leahy skillfully parodies brands we’ve come to know and love. Sadly, the biggest laughs are during the commercial cut scenes, which have nothing to do with the plot.

In Ad Nauseam, Phil O’ Harriet (Joshua Quinn) has a dream of becoming a copywriter but has to climb the corporate ladder before he gets a shot at it. His dream? To be on the Reine and Rankle advertising team — and his boss, Trudy Femster (Amber Nash), has the power to make his dreams come true. Plagued by early-morning martinis, strange coworkers and a new love interest, Phil begins his climb to the top, but will his gender get in the way?

The show itself doesn’t particularly offer any overhanging moral implications for the audience to take home. The story reads like a 90-minute cut sketch from Saturday Night Live, which says something about this cast and their ability to carry a show. Led by Amber Nash, the cast is hilarious, and most importantly, they’re seasoned. The leading women of the cast — Nash, Williams and Ochs — are more than at home in this material, and it’s what drew me into the show as it progressed. Phil O’Harriet (Joshua Quinn) is a secretary with big ambitions who hopes Rosanna Ferrington (Tara Ochs) can take him there.

It’s incredible to see actors operating on another level of performance; comedic timing is almost like a sixth sense, and they all seemed to be on the same beat every step of the way. Another cast standout is Freddy Boyd as Stan Balloon. He has a great bit during the commercial cut scenes that I’d describe as voice-over harassment. It plays perfectly to the audience and unlike most of the show doesn’t need exposition to be funny — it’s refreshing.

The thing this show does best is comic execution. The funniest bit to me, much like the commercials, had nothing to do with the plot. It’s the greatest presentation of physical comedy I’ve seen onstage. The scene is simply two characters playing tennis in a Rowan Atkinson-style match. Completely mimed and only aided by a backing track of ball bounces, it was an entrancing moment.

Ad Nauseam is a great set up, but it doesn’t pay off as well as expected. Sporting a company of veterans and a few of Dad’s Garage’s rookies, the cast picks up the slack where the writing falls. Ad Nauseam ultimately proves to be too niche in its plot but is saved by its clever readings of societal norms.