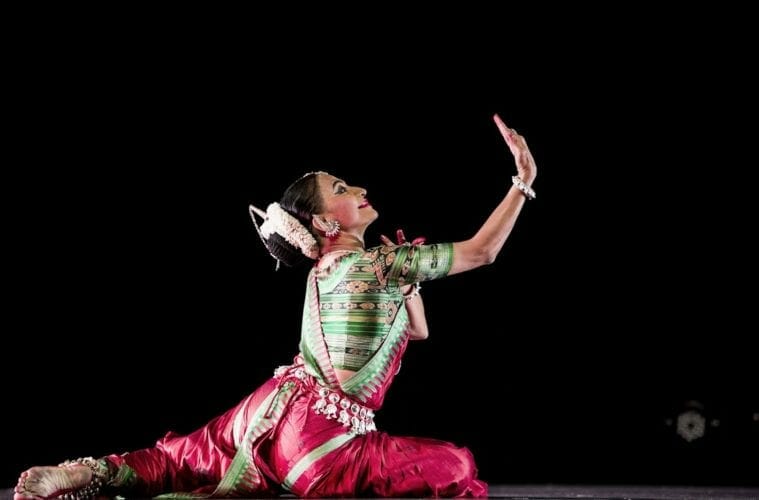 Bijayini Satpathy, one of the leading practitioners of the ancient Odissi dance form, comes to Duluth as part of her first solo U.S. tour.

In Sanskrit, kalpana means imagination. Translated through Odissi — a classical dance form that originates in the Hindu temples of Odisha, India — it stands for one dancer, in one costume alone, conjuring an entire theatrical experience with the command of a wavering finger, raised eyebrow or tilted torso. On October 12, Bijayini Satpathy’s Kalpana will mark a rare metro Atlanta solo performance in Duluth.

Jayanthi Narain, who organized the performance, first witnessed Satpathy perform at the Kennedy Center in 2013 and again at Duke University in 2015. Narain grew up learning Kuchipudi, a classical Indian dance style that originated in the southern Indian state of Andhra Pradesh. Narain says it was Satpathy’s talent, control and precision that moved her, especially as she inhabited spaces of joy and total abandon during portrayals of the Sanskrit epic Ramayana’s gods and demons.

“Ms. Satpathy becomes one character after another, quickly transforming with just a slight shift in posture or an additional glint of steel in her gaze,” says Narain.

Her guru, Sasikala Penumarthi, is located in the Atlanta area and instilled in Narain a lifelong appreciation and dedication to learning and promoting Indian dance. In 2016, Narain left her job in Washington, D.C., to learn Odissi from Satpathy in India. “When I learned earlier this year that she was tentatively planning her first solo tour of the U.S., I immediately reached out to see whether she would be able to make Atlanta part of that journey,” Narain says. Satpathy’s acclaim follows her around the globe as both a solo performer and with the Nrityagram Dance Ensemble, including praise by the New York Times. Satpathy served as director of Nrityagram’s school outside of Bangalore for 20 years, where she expanded the form’s training vocabulary to make it possible for trainees to access choreography and incorporate somatics alongside artistry.

She combined yoga, the ancient martial art form Kalaripayattu, ballet, Pilates and contemporary movement vocabulary in her curriculum. For Satpathy, teaching Odissi means blending Western techniques with the pedagogy prescribed by the Natyashastra, an ancient Indian scripture of theater and movement.

“Odissi bends and curves time by creating sequential or ripple time effect from limb to limb,” says Satpathy, who feels its grace and strength in her every isolation, change of direction or paradoxical representation of “harmony” in the body.

Narain advises audiences new to Odissi to enjoy Kalpana’s storytelling qualities as characters come to life through dance and music. Focusing less on the structure, the eyes should follow the lines and curves of movement.

“Like many classical Indian dance forms, Odissi holds multitudes,” says Narain. “Within one performance you will see dance as worshipful, awe-inspiring, graceful, athletic, with micro-moments of humor, full of subtle earthly desire, or alternately, full of longing for the divine.”

Satpathy is excited to share her solo performance with Atlanta audiences, as each section connects with viewers differently to enhance the onstage experience.

“I look forward to a true American audience with people from different backgrounds,” says Satpathy. “A certain intimacy and rapport is established between the dancer and each audience member making the experience very moving and palpable. I feel the audience. I hope they do, too.”