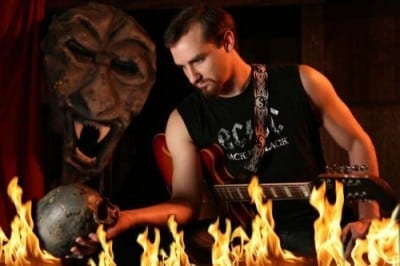 Known for understated Elizabethan-style productions that are focused on Shakespeare’s language and blissfully free of wacky “concepts,” the Atlanta Shakespeare Company — aka the Shakespeare Tavern — is taking a radical departure with “Hamlet! The Musical!,” with a surging rock ‘n’ roll beat, adult themes, sexual situations, drug references and “shocking violence.” The play, which director Drew Reeves calls “a very dark comedy” and “not Elizabethan at all,” opens Thursday and runs through August 8.

For a company that prides itself on “original practice” productions of the Bard and other classics, “Hamlet! The Musical!” is a fresh direction. “It’s fun for us to do a change of pace, to see what we can do if we decide to take a more conceptual spin on Shakespeare,” Reeves offered. “If we step out of the box once in a while, we’re not leaving our mission statement behind. This is extremely outside of the box, an existential musical.” 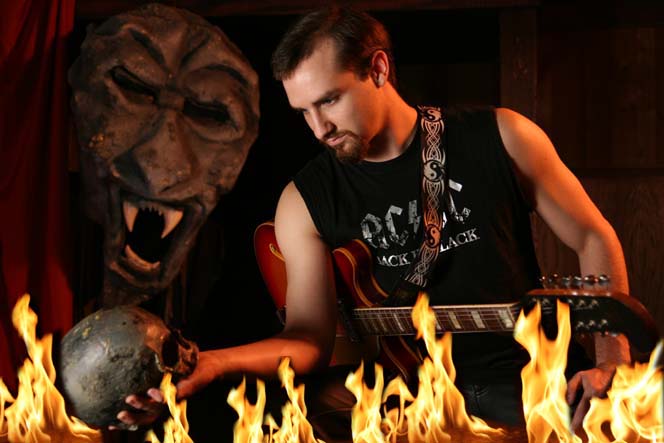 Shakespeare Tavern artistic director Jeffrey Watkins is excited by the production’s pulsating energy and novel touches, with “a bubble machine, people flying around, a new sound system … imagine, a sound system at the tavern.”

Reeves, the ASC’s associate producer and one of its most recognizable actors, said the screaming electric guitars made the new sound system necessary. “There’s a lot of live music,” he said. “The performers for the first time in our theater are miked. We took the opportunity to install a new permanent sound system, with mikes and amps and all of that. The sound system was needed to get the singers’ voices over the music.”

This production is a complete revision of Eddie Levi Lee, Rebecca Wackler and Phillip DePoy’s original version, which started at Atlanta’s Academy Theater and ran at the Theatrical Outfit in the 1980s and early 1990s. (Watkins said Lee and DePoy plan to attend Saturday’s performance.) In outlining the changes, Reeves, who’s directing his first musical, said, “I’ve added a modern-day framing device, a prologue and an epilogue that gives it a reason why we’re doing ‘Hamlet, The Musical.’ I’m trying to use the original ‘Hamlet’ with a more contemporary setting and more contemporary references to still get to the heart of what ‘Hamlet’ is about. It’s a very dark comedy, with a juxtaposition of a very honest sense of ‘Hamlet’ with something ridiculous and over the top. It’s taking the Shakespeare characters and stories to the extreme.” In Reeves’ conception, contemporary rockers find themselves in Purgatory and forced to perform the play we know as “Hamlet.” “We don’t know why until the end,” he said.

The ASC’s production includes five new songs, along with eight from the original show composed by DePoy, a familiar figure on the Atlanta theater scene and director of theater at Clayton State University. Reeves said he consulted with DePoy about his new concept and that the songwriter “loved the idea. He basically gave me carte blanche to continue forward.”

No score exists from the original production, and all Reeves had to work with was the stage manager’s prompt scripts. Musical director Renee Clark, who also directed the tavern’s productions of “Cabaret” and “The Fantasticks,” had cassette recordings of the original eight songs. “She pretty much had to teach everything by ear, which was extra challenging,” Reeves said. Clark wrote the music for the five new songs, and Reeves did the lyrics, also a first for him. He’s particularly proud of their song “Bad, the Remix,” which echoes an original song called “Bad” for which there was no reference.

Playing the “film star,” the Hamlet role, is J.C. Long (in photo), a familiar tavern performer. Other cast members are Travis Smith as “the aging musician-drug dealer” (aka Claudius), Becky Cormier-Finch as a washed up backup singer (Ophelia), resident ASC comedian Jeff McKerley as the street musician Polonius, and Nick Arapoglou as the Entertainment Correspondent Laertes. The cast also performs the show’s music.