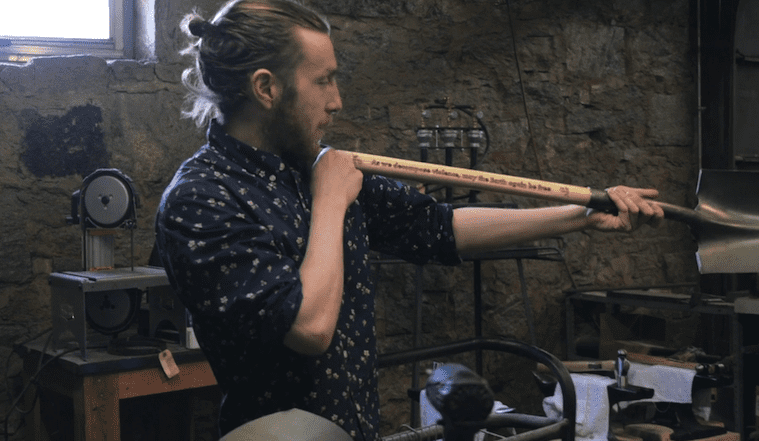 "Serotiny: The Story of Lead to Life" by Fraser Jones follows activists in Atlanta transforming guns into shovels to plant trees alongside victims of gun violence. The new handle says: "As we decompose violence, the Earth again can breathe."

ArtsATL and Fulton County Arts & Culture recently partnered on a project titled Serendipity. Its goal: to celebrate metro Atlanta filmmakers and the art of film.

A three-person jury chose 17 short films from 43 submissions. The films were then grouped in four parts — Documentary Is Poetry (57:13), Poetry Is Truth (58:44), Truth Is Narrative (1:13:56) and Narrative Is Poetry  (1:10:20). All are viewable through April 30 on ArtsATL’s website and YouTube page. ArtsATL received $18,000 from the Fulton County Department of Arts & Culture to complete the project.

The judges were Jim Farmer, founder and director of Atlanta’s Out on Film festival and an ArtsATL film and theater contributor/critic; ArtsATL business development manager Jordan Neal; and Atlanta filmmaker Lev Omelchenko.

Seven shorts were singled out with specific honors. In alphabetical order by film title, they are:

BEST SCREENPLAY. Birthday Cake by Brantly Jackson Watts, a writer and director who specializes in character-driven, Southern gothic narratives and documentary films. She describes Birthday Cake as a haunting story of love, survival and the complexities found in relationships as seen through the lens of modern domestic violence.

BEST EDITING, NONFICTION. Dear, Dreamer by Kristian Melom, a director and cinematographer who focuses on documentaries and social justice. He describes Dear Dreamer as a lyrical portrait of the life and work of rising literary star Jason Reynolds, who’s best known as a New York Times best-selling author and mentor to young adults.

BEST ORIGINAL SOUNDTRACK. Ends by David Tabor, who’s been writing, editing, producing and directing films for nearly a decade. Ends, he says, began with a creative prompt from cinematographer Samuel Laubscher, who had acquired some older Kodak 16mm film and wanted to make something sci-fi with a healthy dose of melancholy. The result is a memory-like tonal poem about generational trauma and identity.

MOST SERENDIPITOUS. Serotiny: The Story of Lead to Life by Fraser Jones, who creates environmental documentaries. Serotiny, he says, follows young activists who gather in Atlanta to transform guns into shovels to plant trees alongside victims of gun violence.

BEST ACTING. Thank You for Calling by Priscila Torres, a writer and director originally from San Salvador, El Salvador. Thank You for Calling, based on her personal experiences, follows a Salvadoran immigrant trapped in the U.S. immigration process and on the cusp of jeopardizing her future.

BEST EDITING, FICTION. TNC by Bobby Huntley, a director, producer, writer and editor who’s been making films since age 10. In TNC, a young man in a bar learns that he has more in common with the other patrons than he believed.