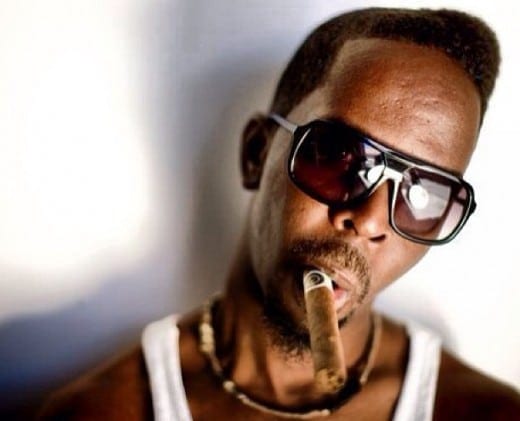 Fahamu Pecou in character as his hip-hop alter-ego

Editor’s note: In celebration of our 10th anniversary, each week we will republish a story from our archives that sparked strong reaction from readers, showcased great writing or marked historical hallmarks in the evolution of Atlanta’s arts community.

When Faith McClure profiled Fahamu Pecou in 2015 for our “Maker’s Dozen” series about 12 rising artists, he was a Ph.D. student at Emory University who had already forged his place in Atlanta’s artistic community. In the years since, Pecou has earned his doctorate and exhibited in Philadelphia, Paris, New York City and at the Michael C. Carlos Museum on the Emory University campus.

Conceptual artist Fahamu Pecou casts himself as the shining superstar of his own hip-hop universe.

As both artist and Ph.D. student in Emory University’s Institute of Liberal Arts, Pecou unravels and scrutinizes representations of black masculinity through satire and caricature, acting out various modalities in which such identities are constructed. To call Pecou’s work ironic, however, is missing the point. And if you think that, you might be among the multitudes lured by a marketing campaign fashioned after the celebrity culture he critiques.

But look further. It’s all a part of the game Pecou plays. For what appears to be mere parody actually points to a much larger meta-critique, wherein hip-hop functions as a contradictory cultural ecosystem, thriving both as commodification and political dissent.

It’s often hard to tell where Pecou’s alter ego ends and the “real” Brooklyn-born artist begins, which is, of course, part of his allure.

I asked Pecou about this while sitting in his spacious light-filled studio in Atlanta’s Old Fourth Ward, largely empty aside from a few clusters of preliminary sketches and photographs — the 39-year-old just completed two back-to-back major exhibitions: GRAV•I•TY at the Museum of Contemporary Art of Georgia and Imagining New Worlds, on view at the High Museum of Art, paired with the late Wifredo Lam and José Parlá.

“The character is me and isn’t me at the same time,” the Atlanta College of Art grad explained. “The question of where it begins and ends is a joke for me . . . I always thought it was really funny that as a society, our thoughts are so governed by someone else’s idea about what we think we should be interested in . . . It was just a genuine question.”

One-on-one, Pecou is actually quite shy. He laughs easily and listens attentively. He has a way of immediately putting you at ease. He’s neither awkward nor boastful, and is comfortable admitting both his shortcomings and his successes. Pretense evades him, which is, in fact, ironic.

Image as propaganda was not a novel concept for Pecou, who also runs a part-time graphic design business. Compelled by the brazenness of celebrity branding, Pecou decided in 2001 to push a comparable bravado, deliberately framing himself as a pop icon.

“The change in response was overnight. It wasn’t so much that people were recognizing the work I was doing; they were caught up in the campaign,” he explained.

Thus a star was born. While signaling a major turning point in his career, such insights into consumer culture also provided an intellectual platform to address American obsession with hip-hop’s iconic glitterati, the commodification of hip-hop as a brand and the exploitation and misrepresentation of black masculinity it promulgated.

Pecou stars as a character in his paintings, performance and videos, performing his own objectification. In the painting series All Dat Glitters Aint Goals, which was also produced as a music video, he represents himself in gangsta glitterati personae. The paintings’ individual titles — Heir Conditioning, Eye Cons, Off da Chain — play with language, speaking in rap lyric vernacular while also playfully teasing out their deeper meaning.

While stereotypes of black masculinity affect Pecou directly, his work is also deeply personal in less obvious ways. When Pecou was four years old, his Panamanian-born father, suffering from schizophrenic hallucinations, violently murdered the artist’s mother before being permanently institutionalized. Pecou and his three siblings were shipped off to live with his aunt, who was also abusive.

Perhaps it was this staggering absence of role models in Pecou’s upbringing that forced a broader awareness of how black masculinity is shaped in the absence of positive male role models.

Becoming a father challenged him to take a harder look at his responsibility. “When my daughter was born, she gave my life purpose; when my son was born, he gave my life focus,” said Pecou in his artist talk at MOCA in January.

The absence of fathers is endemic in many African American communities. Only 25 percent of all African American homes are two-parent households. The 2012 Census Bureau reported that approximately 50 percent of black children live in households without a father figure present. Fewer than 2 percent of the nation’s elementary school teachers are black men.

Lacking positive role models in their own homes, who are these young men looking up to?

Pop culture has no shortage of heroes. Yet the hip-hop music industry, where many black youth culturally discover themselves, inculcates an inaccurate notion of the black male as either revered icon or incriminated villain, both reiterated in mainstream media. But Pecou asserts that hip-hop’s caricatures are not always what they appear. Much like Pecou’s artwork, it’s possible for rap and hip-hop artists to consciously perform these so-called stereotypes while simultaneously undermining them within the content of their artistic message.

“Obstinate Resistance,” the term Pecou has coined for this kind of dissent, is the heart of the artist’s creative work as well as his scholarship. He deems this unlikely form of creative opposition potentially more effective because it destabilizes the entire system of response to racial prejudice in America.

“When young black men get shot in the street,” Pecou explains, “we’re expected to march and have a candlelight vigil and Al Sharpton is going to come on TV and that’ll be it until the next time it happens.”

Pecou argues that such pop icons as rap artist Kanye West, the primary figure of his research, are essential in disrupting these more traditional forms of opposition, rendered ineffective by their predictability.

“My dissertation looks at black men whose political ideas or creative ideas don’t fit within the dominant ideology, [and] how they’re marginalized and vilified, and their images manipulated to [distract] you from the ultimate message,” says the artist.

West is widely considered a problematic figure, often described as intensely narcissistic, emotional and frequently out of control. But Pecou thinks differently, pointing to his irreverent lyrics and public persona.

He writes, “I’m interested in the way [Kanye] West combines obstinacy and satire to perform an embodied resistance to American/Western ideals. His lyrics undermine acceptable or politically correct ways of being/behaving while simultaneously encouraging Black resistance and Black agency towards more radical ends.”

Pecou’s recent exhibition GRAV•I•TY framed the fashion trend of sagging (wearing pants below the belt line) as a similarly subversive political act with complicated history. Through drawing, painting and sound works, he suggests that the style is actually a demand to be seen. The characters depicted, each of them sporting exaggerated layers of boxers, literally defy gravity in their ascent toward higher goals. Hip-hop as a relevant topic of scholarship is finally edging its way into academic discourse. At Georgia State University, for example, English language and literature professor Scott Heath teaches a course called Kanye Versus Everybody: Black Poetry and Poetics from Hughes to Hip-Hop.

“I think that young writers around the world — and especially young black writers — are more prolific than they’ve ever been. It just so happens that they’re writing to a beat,” he writes in Fader. “It’s not just poetry, but [also] the ways that we use language, discuss language, think through language.”

Pecou further bridges the gap between pop culture and academia with Scholarshit, his blog and digital pedagogy project, a brilliant alchemical blending of art, rap and scholarship — three forms of inquiry not otherwise in cross-dialogue.

As a nationally known black artist living in Atlanta, Pecou remains awkwardly situated between communities that infrequently intersect. “Young black men of a certain age [are] who I do my work for, but that’s not necessarily my audience,” explains Pecou.

“I’m constantly trying to get my work in front of that community . . . But it is challenging because there is a disconnect between the black community and the art community.”

Pecou uses different platforms to reach particular audiences. One can see his exhibitions at galleries and museums; another might follow him at Fahamu Pecou is the SH!T on Facebook.

Artist. Scholar. Advocate. Father. Pecou, it seems, is becoming the very role model for young black men he sought himself as a precocious young artist.