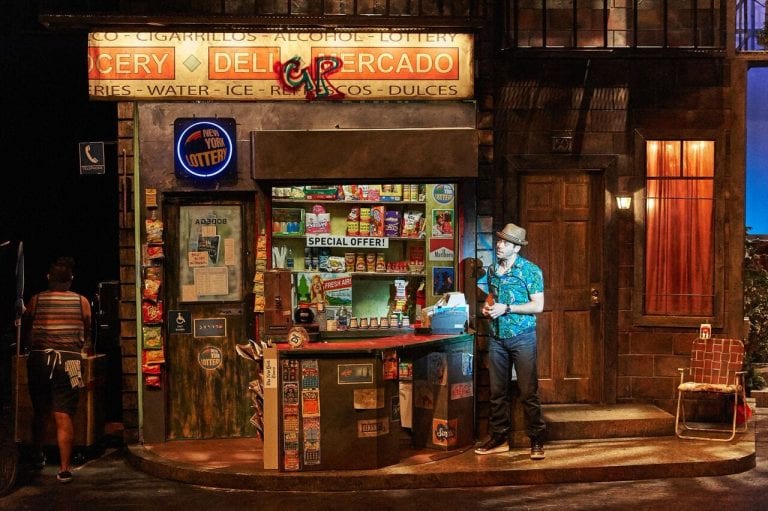 The brilliant In The Heights, starring Diego Klock-Perez, was one of the highlights of the theater season. (Photo by Chris Bartelski)

The Year in Review: Atlanta theater had an often strong, often inconsistent 2016

It was a memorable, though slightly down, year for Atlanta theater. ArtsATL theater critics Andrew Alexander and Jim Farmer sat down recently to take a look back at some of the highs and lows of Atlanta theater in 2016, and their thoughts for what 2017 may hold.

Andrew Alexander: Well, the world seems pretty much in agreement: 2016 was a colossal bummer. But having been tasked with taking a look back at the year in Atlanta theater, I’m hoping we’ll have a slightly more positive and hopeful outlook about that realm, at least. Having said that, I actually didn’t think this was a wildly impressive year at the theater, though there were a few bright spots. What was your take on the year in general? Any show stand out as an absolute favorite?

Jim Farmer: I wasn’t as impressed with this season as last year. There were more rough spots than in 2015, but overall I was pleased. My favorite show of 2015 was the Aurora Theatre/Theatrical Outfit collaboration Memphis and my favorite show this year was their collaborative take on In the Heights. What a joyous, energetic show, created by Hamilton’s Lin-Manuel Miranda. It was a musical that felt very current. It also featured one of the great musical ensembles that I’ve ever seen in a local production. What stood out for you?

Alexander: I had a lot of affection for the 7 Stages’ production of The Threepenny Opera. It was a fresh and inventive take on a classic, something we don’t see often enough in Atlanta. I also liked the Alliance’s Ugly Lies the Bone and Synchronicity’s Anne Boleyn. Shows early in the year often get short shrift in lists like these so I also want to give shout-outs to shows from early on: Disgraced at the Alliance had everyone talking, including you and me, and Wit at Aurora was a reminder of what an awesome, timeless show Atlanta playwright Margaret Edson created. Any other favorites?

Farmer: Aurora’s Wit was astonishing, indeed. I adored Horizon Theatre’s The Toxic Avenger for its sheer audacity and goofiness — and for the expert cast that director Heidi Cline McKerley pulled together. I was very engaged by the political drama The City of Conversation at Horizon as well and moved by the Aurora Theatre version of Into the Woods. Finally, my vote for the most underrated production of the year was True Colors’ exceptional, topical Smart People. What performances did you dig?

Alexander: I was impressed with the cast of Ugly Lies the Bone, especially Julie Jesneck as the lead character Jess. And talk about off-the-radar performances: I loved a touring show called Red-Eye to Havre de Grace that was at the Ferst Center in April. Unfortunately, the theater was mostly empty, so I don’t think word got out soon enough, but the performer and the show’s creator, Thaddeus Phillips, really knocked it out of the park with his performance as a tragic, confused and dissipated Edgar Allan Poe in his last days. I also enjoyed seeing actress Tinashe Kajese in everything I’ve seen her in, so it’s hard to single out one show; she was in a lot and great in all of it. She has a way of making even a supporting role, like the one in Disgraced, pop to life, and I look forward to seeing more from her soon. Any individual performances stand out for you in 2016?

Farmer: Mary Lynn Owen in Wit gave the year’s best performance. Leslie Bellair’s “Bitch/Slut/Liar/Whore” number in The Toxic Avenger was the most giddy 10 minutes of 2016. I loved Diany Rodriguez in Into the Woods and in In the Heights, Niki Badua in Serenbe Playhouse’s Miss Saigon and Terry Burrell in another underrated 2016 offering, the Alliance Theatre’s Ethel.  As for the men, Kenny Raskin was a standout in Aurora’s I’m Not Rappaport, Both Eymard Cabling and Diego Klock-Perez in Miss Saigon and In the Heights, respectively, were perfection, as was Tim Quartier in Theatrical Outfit’s The Light in the Piazza. What directors do you think deserve special mention?

Alexander: Michael Haverty and Threepenny just seemed to be a great match of director to material. It had a ton of moving parts: music, costumes, animation, live video, but all of its inventive elements worked well together. Brian Clowdus and the gang down at Serenbe certainly merit a shout-out for all the work they’ve been doing with immersive theater. I don’t know how they’ll be able to top the helicopter in Miss Saigon. Maybe they can bring in an aircraft carrier for a production of South Pacific or something.

Farmer: I have to give props to Justin Anderson, my director of the year. He was responsible for In the Heights, Into the Woods and The City of Conversation –– all in one year. And Brian Clowdus probably staged the most talked-about production of the year and made Miss Saigon a lot more than the helicopter landing show. It was definitely in my Top 10 productions of the year. I have heard that he is looking into staging Titanic and hoping to sink the boat each night. It wouldn’t surprise me. If Miss Saigon was the most discussed show of 2016, The Prom was up there as well. What do you think its prospects are of being a hit on Broadway?

Alexander: It has to make it there first. We had a fine cast in Atlanta, but I think to be a hit, to sell tickets, the show would need big Broadway stars to play the big Broadway stars. Maybe that’s what the show was designed to be: a star vehicle. We just saw the vehicle before the stars stepped into it. I wasn’t crazy about The Prom, but I could see it was a work in progress and not without potential, and I heard from a lot of viewers who adored it, so go figure. I actually hope they manage to tighten it up and send it on to Broadway. I think it’s cool when shows from the ATL end up on the Great White Way, so I wish it all the best. Are you expecting to see The Prom hit Broadway soon?

Farmer: Who knows? Hatched at the Alliance, Tuck Everlasting was anything but everlasting on Broadway. It closed quickly. I had some issues with The Prom too, namely its simplistic book and some over-the-top performances. There is potential there, though, and it would be nice for the theater and director Casey Nicholaw.

When I think of 2016, a few other things stand out for me. Adam Koch’s Carousel set at Serene Playhouse was astonishing. I literally wanted to ride the rides all night. It was a year of Stephen Sondheim across the city. In terms of national tours, I was most taken by the recent Cabaret with former Atlantan Randy Harrison. I have to ask, Andrew — are we brave enough to endure potential brickbats and list our least fave shows?

Alexander: I feel like this year has given me skin of iron coated in Teflon, so let ‘em try to bring on the brickbats; they’ll bounce right off. I found Peter and the Starcatcher almost utterly devoid of appeal. Even when I’m panning a show, I typically try to mention something positive in my review, and I believe the only thing I could find to praise in that case was a pleasantly painted drop curtain. Any painful experiences you’d care to share? Sometimes it helps to talk about it.

Farmer: Thanks — and please send me a counseling invoice. The Teflon outfit wouldn’t hurt either. Peter was painful but I think that has less to do with Georgia Ensemble Theatre’s rendition than the fact that it just stinks as a production. My least favorite show of the year was Actor’s Express’ Significant Other. The irony is, it received positive notices in New York so I don’t know what happened here. To me, it was a two-and-a-half-hour moan/pity party about a gay man looking for a connection in New York. The final image of the main character sobbing alone and trying to soldier on past his heartbreak while all his straight friends found love was retro and slightly insulting.

I will remember this year overall, however, for some exceptional work from a lot of companies and for a theater community that continues to prosper and produce new and challenging work. And you?

Alexander: I’m curious to see what’s ahead and especially how Atlanta theater artists engage with the crappy moment we’ve been handed. It’s easy to say a lot of positive things about the power of theater, how art can be a salve and artists can shape the culture on and on, but theater was, as you mentioned, already something of a struggling underdog before this went down, and I suspect the tasks ahead will require even more and harder work from an already beleaguered and understandably exhausted set of artists. Anyway, I’m still curious about what’s ahead, even if it’s not all good

Farmer: Same here. Next year should be an interesting one, to say the least. I can’t wait to see how the theater community responds! Happy Holidays, Andrew!