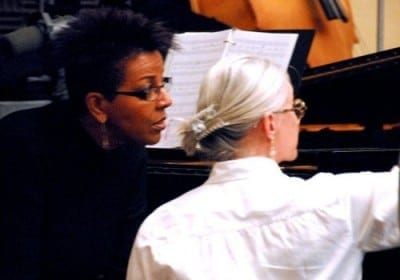 Twyla Tharp’s "Come Fly With Me" comes to Alliance Theatre

Before a small audience, she stood in a pair of wooden, ski-like shoes. She stretched her body into a right angle, and then leaned forward into a diagonal line as if ski-jumping through the air. The year was 1965, when fledgling dancer/choreographer Twyla Tharp performed her first piece. The title, “Tank Dive,” expressed her sense that succeeding as concert choreographer was, Tharp wrote, “like diving off very high platform into a thimbleful of water.”

She’s known today in the dance world simply as “Twyla” — dancers regard her with a mix of respect and admiration not unlike Tharp’s regard for George Balanchine. Like Mr. B., she’s often looked to the past for inspiration, while pushing choreography forward into new territory. And it’s likely that the upcoming world premiere of “Come Fly with Me” — a musical tribute to Frank Sinatra conceived, directed and choreographed by Tharp — is no exception. Previews begin Sept. 15, and the show opens Sept. 23 and runs through Oct. 11.

Last year, producers approached Alliance Theatre artistic director Susan Booth seeking an originating theater. Booth saw that the project sat perfectly in the theater’s mission to support and promote new work by the field’s top artists and to bring the highest level of performance to the Atlanta community.

A no-brainer. With Tharp’s choreography, Sinatra’s emotionally resonant voice, jazz singer Dee Daniels and some of the finest dancers in the field, it’s likely she’ll stir in us every feeling associated with romance and carry us through an intricately woven story that leaves us with a satisfying resolution. (Top photo shows Daniels and Tharp, resplendent with silver hair, at a December 2008 workshop for “Come Fly”; middle is actress Karine Plantadit; below is actor John Selya. Photos by Gene Carl Feldman.)

But beyond that, as a vital dance community, what can we absorb from Twyla while she’s here? As I read her books, “Push Comes to Shove” and “The Creative Habit,” I am struck by her steadfast discipline, respect for history, thirst for knowledge and openness to other art forms. I’m empowered by her willingness to take on new challenges, to sometimes accept failure, and then to move on.

And by that early five-year period that followed the premiere of “Tank Dive,” Tharp and her dancers experimented with the building blocks of movement — breaking it “down to the quarks,” (i.e. subatomic particles) — rearranging the pieces and putting movement through every conceivable permutation. They reversed, inverted and retrograded countless phrases, slowing things down and speeding them up to unimaginable extremes. They made site-specific dances with all of Manhattan as their venue, and they choreographed in a space the size of a prison cell. They performed without music, because their dance had its own rhythms, tensions, harmony and counterpoint.

To me, this rigorous analysis sets a standard few of us can follow (with the exception of Atlanta’s Lauri Stallings, who’s doing just that). As dancers and choreographers, how many of us are committed to going into the studio for six or more hours a day, with little or no pay, to build a new vocabulary that’s unique to our physicality, our experience and what we have to express?

Are we pushing into uncharted territory, or are we settling on novelty for novelty’s sake? Have we thoroughly investigated our palette, or framework of movement choices? Do we have adequate technical skill to illuminate the choreography’s details and subtleties? Can our work stand on its own without music?

While I was dancing in New York, I remember Twyla’s influence — the shoes we wore, the way we dressed, the way we meticulously counted our phrases, made tight canons and all kinds of variations. I remember how Tharp dancer Nina Wiener taught us to skid, chug, shuffle and spin — to see movement not in terms of its shapes, but as a series of transitions. Virtuosity was meeting pedestrian movement in modern dance, which was just beginning to unite with ballet. (Tharp portrait by Greg Gorman.)

To those in the Atlanta dance community, how has Twyla influenced you? Post a comment, start a conversation. And while she’s in town, how can she influence us still?