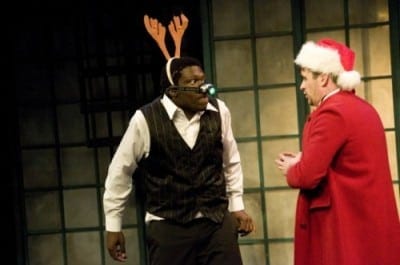 Review: Actor’s Express’ “Every Christmas Story Ever Told,” where satire devours itself

Has Christmas become so cliché that even the parodies are clichéd?

That was the question that started buzzing around while watching — and at times, enduring — Actor’s Express’ mounting of “Every Christmas Story Ever Told.” We used to lament every year that we’re being inundated with myriad different holiday-themed productions, but we’re also starting to get our fair share of holiday-theater satire.

The best of the lot is arguably the stage adaptation of David Sedaris’ cynically witty “The Santaland Diaries” (which is now at Horizon Theatre). These kinds of productions succeed because they deconstruct the façade of holiday cheer crippled by consumerism. It’s not so apparent that the growing number of Christmas stories are so ripe for ridicule. You wouldn’t think so from the Actor’s Express mounting of “Every Christmas Story Ever Told.” Written by Michael Carleton, John Alvarez and Jim Fitzgerald, the production suffered from a lack of energy from its cast and uninspired staging from the director and crew.

Before this dissolves into a slam job, a qualifier: on the night I attended, the cast already had done three performances, including a matinee earlier that day. You had to wonder if they were up for the challenge, especially with barely 25 people in the audience.

The idea sounds novel enough: rip through as many holiday-story sacred cows and traditions as possible in 90 minutes, all while one of the cast members (Chad Martin) begs the other two to return to his original idea of performing “A Christmas Carol.” Having just seen the Alliance Theatre’s venerable production of the Dickens classic just days earlier, I was game. By the end, I was pining for Tiny Tim.

The biggest problem with “Every Christmas Story” lies in the script, which isn’t as clever as it wants to be and relies too much on easy sarcasm. And is it really that much of a revelation that “It’s a Wonderful Life” has some parallels to “A Christmas Carol”? If there’s anything clever about the script, it’s how it engages in some Trivial Pursuit about celebrations of Christmas around the globe, offering some playful pokes at such poke-able nations as Sweden, Iceland and Australia. But soon the comedy relies on slapstick and slapdash reinterpretations of stuff like “How the Grinch Stole Christmas,” “Rudolph the Red-Nosed Reindeer” and “The Gift of the Magi.” Amber Chaney’s cheery mispronunciation of the name as “Maggie!” gets little more than a knowing chuckle.

Though they’re troupers, Martin, Chaney and newcomer Bren Thomas just couldn’t keep up. This kind of rapid-fire satire really needs to attack you at warp speed. Director Clint Thornton doesn’t yet appreciate the breakneck pace needed for this kind of humor. When the material is this thin, the laughs have to come fast and furious so you don’t have time to linger on the weaknesses.

But even the structure is off. Dividing what should be a wild 90-minute ride into two acts robbed the production and its actors of even more rhythm. By the time we got to the juxtaposing storylines of “It’s a Wonderful Life” and “A Christmas Carol,” the phrase “I want to live again!” took on a whole new meaning.

The staging also felt a little lazy. The set is reduced to a window-framed building façade with an open upstairs, and flakes of snow and hints of exposed brick make up the stage floor. One of the few funny recurring gags features Thomas skating around mocking the old Norelco commercials while sitting on a three-wheel bucket roller. (It’s a recession. You make do.)

They all bring their strengths. Martin makes for a perfect harried soul who’s just trying to keep Christmas tradition alive, and Chaney delivers a nice dose of sharp tone in her delivery. And Thomas, the newcomer, has a kind of booming presence. Maybe give ’em a healthy dose of Dad’s Garage and there’s hope.

The cast of “Every Christmas Story Ever Told” has the potential to close the gap between a weak script and the talent on stage, but considering that script, that will take a Christmas miracle. But for those willing to try and those willing to give them another shot, God bless us, every one.