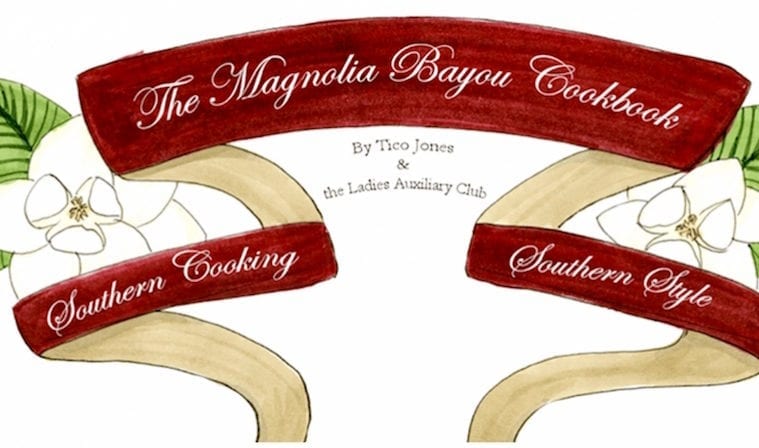 It’s a beautiful work that feels both modern and nostalgic, with real recipes from a bygone era remade into far more appetizing incarnations — Terrell’s favorite example is an old recipe for Roquefort cheese ice cream served nakedly atop a bed of iceberg lettuce, which he reimagined as an accompaniment for red wine poached pears. Now that’s a “glow up.” 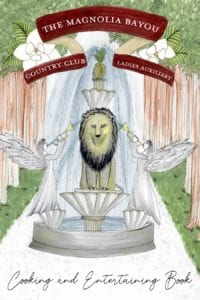 What really makes The Magnolia Bayou so special is the individual inserts Matthew puts into every copy — a mix of real and fake newspaper clippings, handwritten notes on scrap paper, a little doodle on the back of a fake receipt — all things that might fall out of a real cookbook that’s been sitting on your granny’s shelf for decades. Each copy is then comb-bound by hand by an actual person rather than being churned out en masse in a factory.

“The comb binding was very important to me,” says Terrell. “I looked all over for someone who could do this service, and it just isn’t done anymore. Then a printer I’d been talking to literally found an old comb binding tool in a shed.”

So many things had to come together just perfectly for The Magnolia Bayou to exist, not the least of which, the ambassadorship Terrell completed through the Alumni Atelier program at Savannah College of Art and Design (SCAD), where he spent six months turning his unique vision into a reality.

The Alumni Atelier program is a residency program open to recent graduates that offers time, studio space and business education, as well as an honorarium for the artist and a separate allowance for meals, supplies and travel costs. It was started by SCAD President Paula Wallace as a way to further the professional endeavors of SCAD graduates — to help them grow their careers while bringing prestige to the university.

Terrell called his time in the Atelier program “one of the most supportive opportunities I’ve ever had,” adding that “they immediately believed in my vision and gave me a lot of leeway to do this that I just couldn’t have gotten anywhere else.” 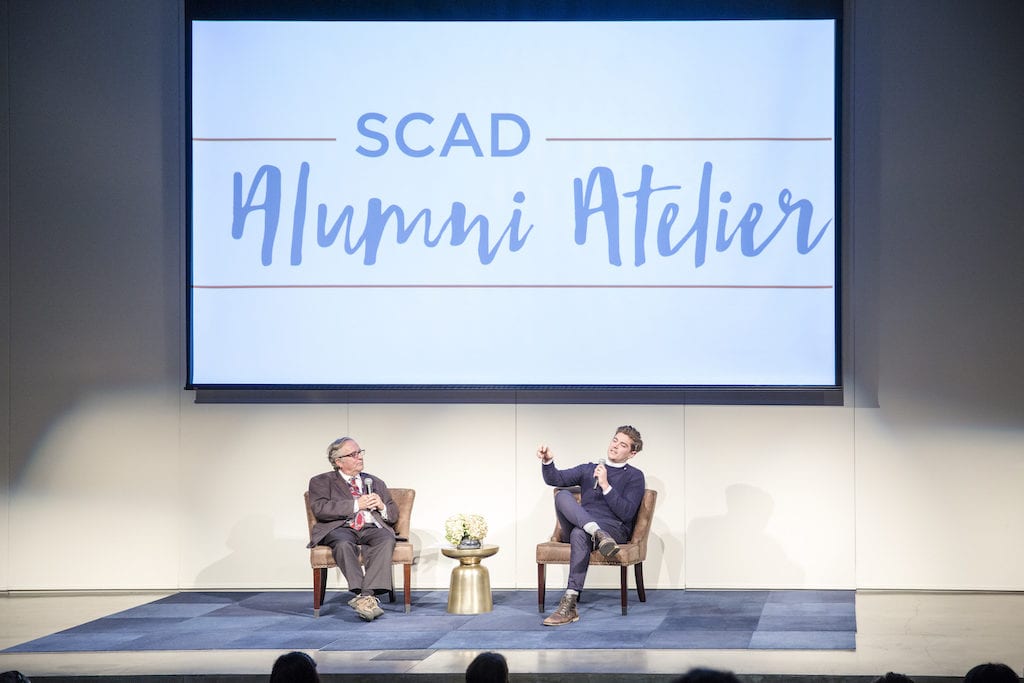 Terrell is just one of over 60 alumni students from SCAD who have used the Atelier program to get a big idea off the ground. Even the program’s coordinator, Tiffani Taylor, is a former Atelier Ambassador, having completed the program in 2016. She just celebrated her eighth year as owner of the Tiffani Taylor Gallery in Savannah, GA, and credits much of the gallery’s success to the guidance and business knowledge she gained through her ambassadorship at SCAD.

“SCAD is a family,” Taylor says. “Even after graduation, you are welcomed back into that fold. SCAD really has a commitment to alumni success, and this program is a testament to that.”

Taylor couldn’t wait to speak about some of the Atelier program’s other success stories. First, Micheal-Birch Pierce, who completed his residency in Lacoste, France, where he made elaborate embroidery medallions and hand-stitched portraiture, among other embellishment arts. From there he was able to create his stitched portraits at events like the SXSW festival and NY Fashion Week and was even commissioned to hand-embroider Christmas ornaments for the Obama White House. 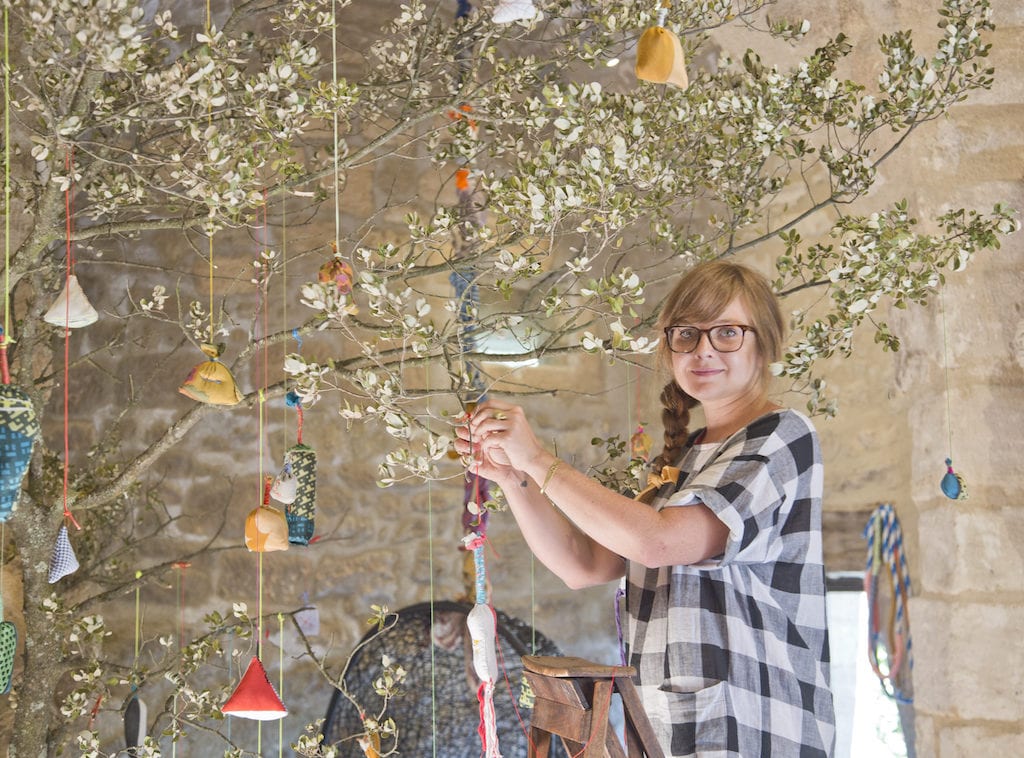 Then there’s Trish Andersen, who also did her ambassadorship in Lacoste with a fiber arts concentration. Trish creates incredible mixed-fiber installations such as her “bories,” which are woven fiber huts just the right size for one or two people to tuck into and gaze out at the sunset over the French countryside.

And, in Atlanta, there’s Allison Dayne, who is currently enrolled in the Atelier program. Her original play, Unrequited: A Chekhovian Collision, will debut at the 2019 Atlanta Fringe Festival. Dayne runs a production company called Leading Ladies, which she uses to get more women on stage and on camera. She says the Alumni Atelier program “was so nice because they were really invested in my goals. They gave me a new beginning to believe in myself again.”

The uniting factor among all of the Atelier ambassadors was their completely unprompted praise for SCAD’s president and the Atelier program founder, Paula Wallace. President Wallace is clearly committed to the ensuing success of the alumni and had this to say about how her institution continues to serve students well into their professional lives:

“SCAD Bees continue to benefit from the university’s abundant resources, even after they graduate. SCAD grads mentor current students, speak at major SCAD events including SCAD Film Festival and graduation, and SCAD creates hero films about alumni and their work. Since 2015 when I founded the Atelier, I’ve awarded 63 Atelier Ambassadorships. The SCAD Alumni Atelier, like SCADpro Venture Studio or our Career and Alumni Success office, personifies SCAD’s focus on creative careers.”

With a 99% graduation and career placement rate, no one considering a career in the arts needs to worry about pursuing a “frivolous art degree” at SCAD.

“This is something I only could have done had I gone to SCAD,” says Terrell about his unusual fictional cookbook. “I don’t think I’d be able to come up with such an idea and make it happen at a more traditional institution. They have taught me how to be a creative person in a way that makes me a better creator.”

When asked how she feels that SCAD helps its students achieve their wildest dreams, Taylor muses, “SCAD is magic.” If “magic” can be summed up as the belief in big ideas and the support to turn them into reality, then clearly she’s right.