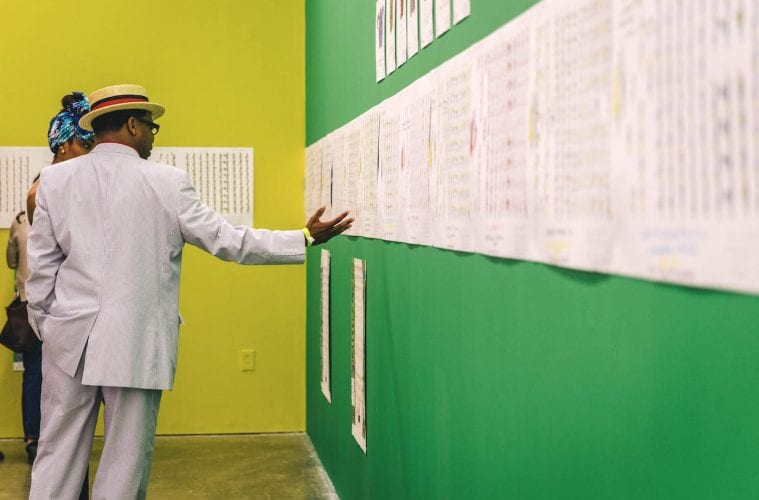 “The best person to compete with is yourself”: a conversation with Dapper Bruce Lafitte

It’s said that the best person to compete with is yourself. That’s advice New Orleans-based artist Dapper Bruce Lafitte has seemingly taken to heart. Lafitte started his meteoric art career using his given name, Bruce M. Washington. After 10 years he retired that moniker and started signing as Dapper Bruce Lafitte, the ‘dapper’ reflective of his style and the Lafitte in reference to the housing projects where he grew up. “I put them all together like gumbo and came up with Dapper Bruce Lafitte,” he says.

Whether as Washington or Dapper, he’s a daunting artist to be pitted against. Lafitte’s vivid drawings, often of New Orleans street scenes and marching bands, buzz with color and life, and their instantaneous appeal and compelling charm have led him to be exhibited and lauded worldwide, from his hometown’s Prospect triennial to galleries and art fairs in Paris, Tokyo and New York. His work can currently be seen at Atlanta Contemporary through August 7.

As his pseudonym indicates, Lafitte grew up in the Lafitte Housing Projects in New Orleans’ Sixth Ward, not far from the city’s famous French Quarter. His grandparents, who raised him, were among the Lafitte’s first residents, having moved there soon after the projects were built in the mid-1960s. “Everybody knew everybody,” says Lafitte of his childhood growing up in the neighborhood. “You might have been a good guy or a bad guy, but people knew you. The projects were one of the best places for me because I was able to be creative, I was able to learn, I was able to grow. I saw things you’d probably never want to see, but because of it I was able to grow from it. I would never change that experience.”

Lafitte says he first started drawing at around four years old. “I remember going to the Mardi Gras parades, and I would come home and draw it,” he says. “My grandmother would say ‘Why don’t you do more with it? Add on to it.’ So I added on to it. By the time I was 10, I was winning all kinds of contests in elementary school.”

Others were less encouraging, arguing that artists didn’t make any money and that he would have to grow up and get a real job. His high school didn’t have an art program, and one of the only role models he had of a living artist was Bob Ross, the television host. “I didn’t think black people were caught up into art,” he says. “I was around negative people who didn’t want me to be an artist. They tried to dictate what I should be in my life.”

He tried playing clarinet in band in junior high, but in the end, he found he just wasn’t cut out for it: he remained the seventh chair of seven players even as he watched his friends rise through the ranks. He quit after two years, but still recalls his experience of observing a marching band from the inside as invaluable. “I wanted to be in the band to see how this thing operates,” he says, “to see how they taught the instrument, to see how they line up for band practice, to see how the band director treats them . . . The band directors were a father figure or a mother figure to those kids when some of them didn’t have a mother or father at home. When they got into marching bands, they shaped up. You gotta have your grades together, you gotta have your attitude together, you gotta be disciplined.”

Still, Lafitte describes the years he wasn’t drawing as a terrible time in his life. “Art was my thing. Art was a way to help me believe, to help me focus and concentrate. When I took those things out of my life, it became really bad for me.”

Lafitte played football in high school and college, and it wasn’t until he was well into adulthood working a variety of day jobs that he decided to give drawing a try again. By sheer coincidence, a month after he picked it up, Hurricane Katrina hit New Orleans, taking away everything he had and throwing his life into chaos. Evacuated to Minnesota, he was encouraged in his drawing by a social worker there. He moved back to New Orleans into a FEMA trailer in August of 2006. “I created about a hundred works in two months,” he says. “I went back to New Orleans and I started cranking up more and more and more.” Lafitte quickly noted the enthusiastic response he got from his drawings of the city’s marching bands; many of the bands were now just memories, the schools having been shut down in the aftermath of Katrina (his drawings often contain written tributes and scrawled shout-outs to the former bands and their leaders). “After Katrina, I had two subjects to pick from,” he says. “I could pick Katrina subjects or I could pick the marching bands. If I had done Katrina, they probably would have shut me down, shut me out. It would take me longer to be established. With the marching bands, when I showed it to people, they freaked out. They loved it. My thing was to put a Band-Aid on it until we could get some stitches on the big wound we had in New Orleans. The marching bands were that Band-Aid.”

The art world has since embraced his work, but struggled a bit with how exactly to categorize him: Folk artist? Self-taught artist? Contemporary artist? “They put me in these categories and asked, ‘Would you be upset if we called you this or that?’ I said no, just put my stuff on the wall and do whatever you want to do.” He says he’s always tried to just keep his focus on creating work that’s vivid and alive. “It has to catch you. Every time you look at it, you have to see something that’s different. Every time you look at it, you gotta want to see another one next to it. That’s what my thing was.”

And now that the wounds of Katrina have started to heal, Lafitte has expanded his subject matter to include the hurricane and its aftermath, oral history and civil rights.

In spite of his frustration, he says New Orleans is — and will always remain — his true home and the main focus of his life’s work. “Where else can I go to talk my language?” he says. “In New Orleans, I’m comfortable . . .  I like that it’s like New York, it’s open 24/7. I like that I can walk out my door and talk to my neighbor. I like to be around the people I grew up with. I like the culture. I like the idea that black people and white people can get together and just have a good time. That’s what New Orleans gives to me . . . I enjoy myself going outside New Orleans and then coming back, just being Dapper.”