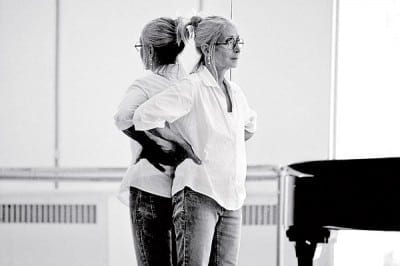 Interview: Twyla Tharp on "Come Fly With Me"

Frank Sinatra’s voice — backed by pulsing, sizzling, big-band sound — accompanies dance that swings and jives, telling stories of love and romance. These are a few of the ingredients in “Come Fly With Me,” a new musical conceived, directed and choreographed by the master, Twyla Tharp. The Alliance Theatre world premiere opens Wednesday, Sept. 23 and runs through Oct. 11. Preview performances have already begun.

Tharp, whose career spans more than 40 years, has choreographed more than 135 works, including the Tony Award-winning “Movin’ Out.” She’s also blazed a trail for female choreographers. Beginning in the 1960s with stark abstractions, progressing through modern dance, movies, ballets and Broadway shows, Tharp has developed a physical, musical and theatrical dance language that embraces a multitude of styles and genres. She has used music ranging from the Beach Boys to Billy Joel, from Jelly Roll Morton to Mozart. And Frank Sinatra’s recordings from the Great American Songbook have been an ongoing presence in her career since 1976.

In a recent interview with me, Tharp talked about her ambition for the new show, how her approach differs from her three previous Sinatra works, and what to look for when you go.

“My goal was to make a narrative theatrical experience,” Tharp explained. To see if she could accomplish this, Tharp returned to “Nine Sinatra Songs” (1982), one of her most enduring Sinatra ballets.

Over the course of one evening, said Tharp, each individual, and couple, is introduced and defined by a particular movement style. A progression of partnering configurations help show each pair’s joys, difficulties and resolutions. And their last coupling, or exit, indicates what their future together will be like.

There’s the “Easy Couple” (Laura Mead and Charlie Neshyba-Hodges, at left), whose journey runs from chance encounter, as they literally bump into each other, to mutual respect, as they exit arm in arm. And there’s the “Power Couple” (Holley Farmer, in blue dress, and John Selya, third picture). Introduced in “I’ve Got a Crush on You,” each tries to top the other as they compete for the spotlight. Finally, Farmer exits carried on Selya’s shoulder, “literally crushing him,” as Tharp put it. Two other couples follow their own individual journeys, all four of them woven together.

Women initiate more in Tharp’s current take on Sinatra. Several duets offer more of the female perspective than in the male-dominated couplings of “Nine Sinatra Songs,” Tharp said. And big-band jazz singer Dee Daniels gives the music a strong female presence as she sings “in conjunct with Sinatra” and offers two solo ballads.

Then there are the dancers — a company of seasoned professionals, some of the best in the field. They’ve worked with Tharp for years, some since the 1980s. All of them danced in “Movin’ Out” — Keith Roberts and John Selya created the roles of Tony and Eddie, respectively — and all are masters of Tharp’s style. They know how to make some of the most difficult choreography look easy. Their years of experience — commitment, sweat, heart and soul — give their performances a degree of passion, subtlety and emotional depth akin to the rich tones of Sinatra’s voice.

Last May, Atlanta’s Fox Theatre gave one of the last showings of “Movin’ Out.” This time around, I noticed several references to past choreographers — a bit of Jerome Robbins here, Martha Graham there, George Balanchine elsewhere. When asked about how “Come Fly With Me” references the past, Tharp replied that she has drawn from a matrix of material that she developed over the course of her own career. One of the reasons she went back to Sinatra was to reinforce where she’s been able to go.