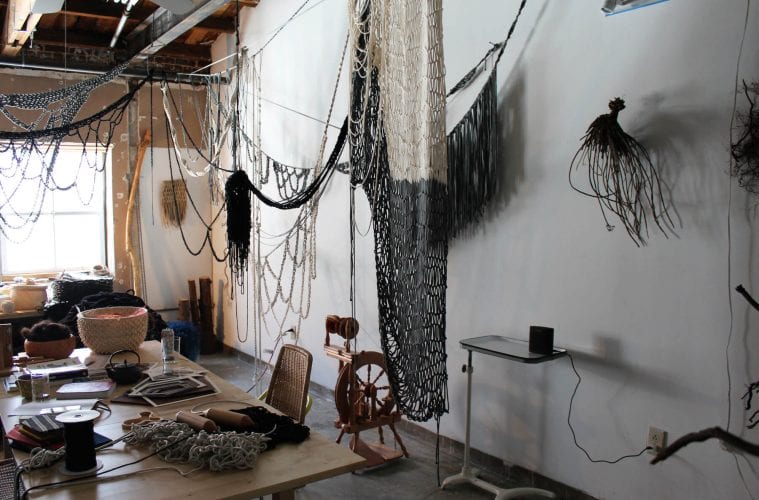 Article and images by Anna Nelson-Daniel.

Sonya Yong James is a multimedia artist who creates sculptural installations using fibrous materials, such as horsehair and sheep’s wool. She grew up in Stone Mountain, Georgia, and currently resides in Atlanta. James is a graduate of the Ernest G. Welch School of Art and Design at Georgia State University. Her recent work in the Gathered III exhibition at MOCA GA was awarded one of four juror’s prizes. In this conversation we meet in her studio at Atlanta Contemporary to discuss memory and material.

ArtsATL: Atlanta is constantly evolving, considering infrastructure and cultural identity. How have memories of growing up in the city informed your practice?

Sonya Yong James: I was born in 1971. My parents met during the Vietnam War. My dad was in the army. He was supposed to go to Vietnam, but he was stationed in Korea instead. So I’m half Korean, half Irish descent. And I grew up in Stone Mountain, Georgia – the capital of the Ku Klux Klan – in a working class neighborhood. So here we are in the Deep South, and there was no one like me (except my brother). Geographically speaking, it was confusing. I hadn’t formed a sense of identity yet.

My childhood home was next door to a compound that housed members of the KKK. I used to go over there and look through the gates, just fascinated with these horses. They had all of these horses, chickens and peacocks. This is a very early memory, and actually, that’s where the origin of the horsehair came from.

It would terrify me to go over there, I was so afraid that they would catch me. But at about seven years old, I would go over and sneak apples through the fence. It was my favorite thing. I could smell the horses, touch them, feel them eat the apple out of my hand. It was this thrilling experience but full of fear because I knew I was loathed. And of course, I would lay in bed at night as a child, worried about those horses, thinking, “how could those bad people have those animals?”

My attraction to horsehair still is that it is this incredible textile fiber. As humans we have used horses and horsehair to survive, for example in sivs for cooking, stuffed walls for insulation, to even make wigs. ArtsATL: The rich, organic materials you use inform much of the meaning in your work. Talk more about your process selecting this media.

James: A project always begins with an intuition and a half-formed question – these direct the research and through the questioning part of the process the projects and the ideas from trying to understand this searching.

The next part of the process is very organic. I begin to work out ideas and structure by prototyping and sketching. This often brings ideas that lead to unexpected places and solutions that I did not initially plan for. I then set out to work. My work is very labor-intensive, and some pieces can take months to complete. I follow my hands, and they often reveal the answers to the questions that I am asking myself while I explore the material I am working with.

The work that I do is about trying to be a part of something – to get lost in the chasing the wonder of it, yet being held in it. Not just being an observer or witness to the process but being completely immersed in the making. I seek to embrace the fear that I face every day to then be comforted by it. The challenge is to trust the process and remain open to change – to dig further and see what is drawn from underneath.

Because my work tends to be very repetitious and labor-intensive, I’ve realized recently that I could list “time” as a material and medium for my work. I also feel a certain responsibility to the craft — it has taken decades of focus for me to learn it, [and] I will continue to do so until I no longer am alive.

When asked why textiles, why fiber . . . I must say that there is something fascinating about cloth. It is seldom appreciated, but it is central to the human experience. I am intrigued by the idea of a single thread becoming warped and weft and forming something whole. It really is part of our lives. We wear it next to our skin. Cloth is always touching us.

Textiles are even used in our language:

“Dyed in the wool”

“Hanging by a thread”

“Cut from the same cloth”

I’ve been drawn to horsehair for many years. It holds the memory of the animal, and it reminds us of our animal selves.

ArtsATL: Your work is often displayed in a suspended state. What is the significance of that tension? James: Humans hold space. We all have a visceral emotional connection to things that are dimensional. Our relationship and reaction to that differ from something that is hung on a wall. I believe I’ve been suspending the work to make it more in the space and area that holds it.

You must enter the work like you enter a room, a place, an experience, even a relationship. You don’t know where it will take you, but you enter anyway. What is important is not only where it takes you — it is also where you take yourself and how you allow yourself to respond, to feel and to be.

Your body is your only real possession. I like the way it can interact with the three-dimensional pieces. I like the idea of being inside a piece rather than just in front of it. My favorite place to be is inside a song or an artwork.

The interaction with the work is a sharing and a touching.

ArtsATL: Which contemporary artists most inspire you?

James: There are so many influences in my creative work. I revisit different ones at different times. Currently, I am thinking a lot about Ann Hamilton, her intrinsic use of words and weavings as metaphors for one another . . . text/textile. Petah Coyne for her meticulous and labor-intensive work. It really touches on the mysterious, the magical, seductive and excessive. Chiharu Shiota for her incredible thread-like webs that allude to the unconscious world and to invisible realms.

I’ve also been listening to the musician Meredith Monk. To quote her, she says that “the voice could be like the body – flexible and fluid with practice.”

ArtsATL: You were recently commissioned to create a sculpture for the U.S. Embassy in Mauritania. Can you go into detail about this upcoming project?

James: I was asked by a curator at Art in Embassies about a year ago to create a piece for the new U.S. Embassy in Nouakchott, Mauritania. She was interested in my textile sculptural work, especially the wool felt work. I wanted to create a work and use something that was fiber-based but Mauritanian. I found a couple in San Francisco that met in Mauritania when she was in the Peace Corp. She is American and he is Mauritanian. It’s a project of theirs to bring back antique textiles from the village where he is from in Mauritania. The proceeds from the selling of these textiles go to supporting a weaving coop there that preserves the indigenous craft of weaving. The proceeds also go to sending children in need to school. The purchase of the textiles that I made for this sculpture will help 12 children go to school for a year. I actually like the idea that these textiles originated so many years ago there in Africa, made their way to San Francisco, then to Atlanta with me and then back home.

My inspiration for the piece for the Mauritanian Embassy originated with the landscape. Having never been there, I looked to films and photographs taken by other artists and journalists that have been in this desert country recently. I was immediately struck by the starkness, the variety of the desert cultures and the very different tribes of people that live there. I wanted to use materials from Mauritania and from Georgia where I am from. When I found the vintage Mauritanian textiles I thought of a quote by the artist Ann Hamilton: “Textiles are the body’s first home.” When it was explained to me that the textiles were handwoven and used to wrap women’s children and to also be passed down to their daughters, I knew it was a material that I needed to include. The sculpture also has Georgia clay and barn tin from an old barn here in Georgia that was originally built in 1860. For me, I wanted to include a part of me and the land that I am from and marry it to pieces of history from Africa.

In my observations, I noticed many different house structures throughout the country. Some houses being constructed of the earth, and some that looked like reclaimed wood and metal. The colorful textiles of the nomadic tribes and also the thatched forms in the interior, further in the Sahara desert, were especially interesting and inspiring. The colors of the desert sand and the textures that I saw also reminded me of the Georgia clay here where I have grown up.

I thought about the history that West Africa and the Deep South has shared in the past 200 years, and I wanted to represent both geographies in this sculpture. The sculpture is composed of approximately 1,000 different house forms. Across cultures, the idea of a house and home stands as a central motif and human archetype of family and safety. To see the different materials in the construction of homes, some that appear to be recycled in Mauritania, represented to me the human spirit of resiliency even in the harshest climates and conditions. There are many refugees that live there now from Mali and other countries. I was also struck with the idea that many displaced people do not have a house but that everyone deserves to have a home.